An atomic projectile colliding with a surface at kinetic energies in the thermal or hyperthermal range interacts with and is reflected by the electronic density well in front of the first layer of target atoms, and it is generally accepted that the repulsive interaction potential is proportional to the density of electrons extending outside the surface. Now, a new review 1 develops a complete treatment of the elastic and inelastic scattering of atoms from a conducting surface in which the interaction with the electron density and its vibrations is treated using electron-phonon coupling theory. 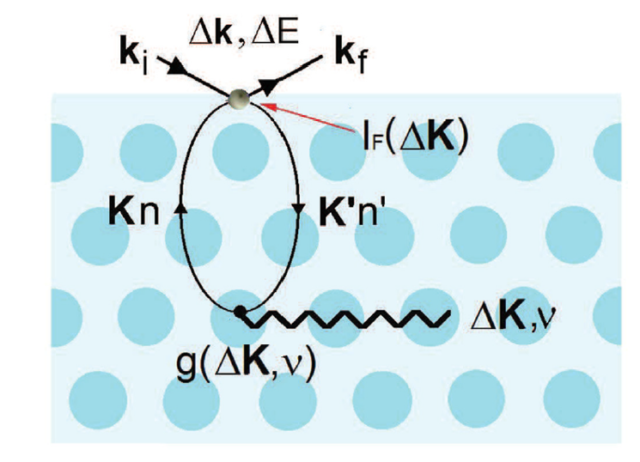 A surface is made of atoms. And atoms vibrate. But, at any instant of time not all atoms in a solid vibrate at the same frequency and amplitude, nor with the same energy. Over time the vibrational energy of any specific atom will also vary randomly. It follows that at a given temperature there will exist a distribution of energies for the constituent atoms about an average energy. With rising temperature, this average energy increases, and, in fact, the temperature of a solid is really just a measure of the average vibrational activity of atoms.

Many properties and processes in solids are manifestations of this vibrational atomic motion. In most solids the principal mode of energy assimilation is by the increase in vibrational energy of the atoms.

However, atoms are bonded to other atoms in the solid. Rather than being independent of one another, the vibrations of adjacent atoms are coupled by virtue of the atomic bonding. These vibrations are coordinated in such a way that travelling lattice waves are produced. Lattice waves may be thought of as elastic waves or simply sound waves, having short wavelengths and very high frequencies, which propagate through the crystal at the velocity of sound. The vibrational thermal energy for a material consists of a series of these elastic waves, which have a range of distributions and frequencies. The thermal scattering of free electrons during electronic conduction is by these vibrational waves, and these elastic waves also participate in the transport of energy during thermal conduction. The vibrational waves themselves are termed phonons.

Since very early on it has been generally understood that low energy atoms are repelled from a crystal surface at distances well in front of the positions of the first layer of atomic cores, and that
this repulsive force originated from the Pauli exclusion of electrons in the two weakly overlapping electronic densities, that is to say the overlap of the electron cloud of the atom with the weak and decaying electronic density as it extends outward from the crystal surface. As this repulsive force originates when the incoming atomic electron density attempts to embed itself in the rarefied density of surface electrons, it is a logical assumption that the interaction potential should be proportional to the surface electron density in the region of the classical turning point.

Still, because of the small kinetic energies involved, it is generally accepted that the dominant method of energy transfer in atom-surface collisions is through the creation and annihilation of phonons. The fact that incoming atomic projectiles are repelled by the weak electron cloud far outside the surface means that they do not directly sense the positions and vibrations of the target core atoms, but rather sense the target atoms only indirectly through electronic interactions.

The new work identifies and places into quantitative terms a number of features of the atom-surface interaction potential for both elastic and inelastic scattering. The electron-phonon interaction couples the motion of the electron density to that of the crystal cores and allows explicit determination of the effective vibrational displacements sensed by the colliding atomic projectiles. Hence the phonon vibrations giving rise to energy transfer to the atomic projectiles are directly related to the actual vibrations of the cores, i.e., to the same vibrational displacements measured by electron, X-ray or neutron scattering.