Now, a team of researchers reports 1 the observation of superconducting collective modes in single-layer NbSe2. 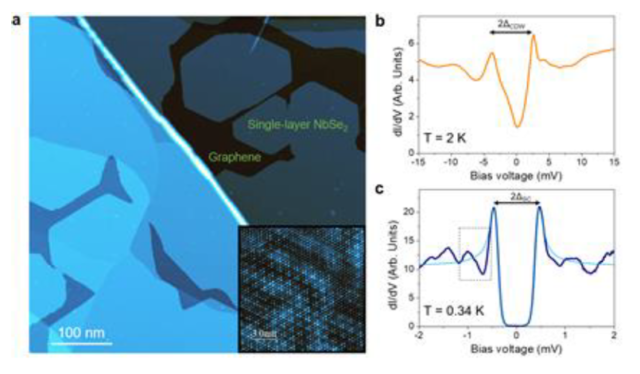 Among 2D TMD superconductors, single-layer NbSe2 has received the most attention and its superconducting properties have been extensively studied. Monolayer NbSe2 has a non-centrosymmetric crystal structure (point group D3h) which enables a form of spin orbit coupling where spins lock out of the plane, leading to Ising superconductivity with enhanced robustness to in-plane magnetic fields. NbSe2 is a superconductor with a critical temperature of 7.2 K.

In this new work, the team investigated the superconducting properties of single-layer NbSe2 with samples grown by molecular beam epitaxy on bilayer graphene on SiC(0001) and h-BN/Ir(111) substrates. By means of high-resolution scanning tunneling microscopy and spectroscopy (STM/STS) measurements at 340 mK, the researchers observed a collective mode univocally associated to superconductivity, which they attribute to a related competing triplet (f-wave) pairing channel. This finding strongly suggests that many-body correlations play a dominant role in the emergence of superconductivity among TMD superconductors.