In most physical systems, particles interact locally or at short distances only. Still, long-range interactions, like electromagnetic forces, play a crucial role in quantum physics and chemistry. They are a key ingredient for many phenomena, from molecular binding to high-temperature superconductivity. While their exact treatment in quantum many-body systems remains numerically challenging, analog quantum simulators offer an alternative setting for the study of complex quantum systems with long-range interactions. Experimental platforms in which long-range interactions between charged particles occur naturally, like quantum dots, are consequently worth studying as analog quantum simulators.

A quantum dot is a nanometric crystalline structure of semiconductor materials. In a quatum dot electrons are confined in a region of space, thus creating a well defined structure of energy levels that depends very much on the size and shape of the quantum dot. This structure resembles that of atoms, that is why sometimes quantum dots are also called artificial atoms. Electrons confined to semiconductor quantum dots provide a versatile test bed for analog quantum simulation of a model in which each electron experiences competing forces: one pushes it to tunnel to neighboring atoms, while the other pushes it away from its neighbors.

However, a detailed study of electron-electron interactions as a function of distance has not yet been performed using quantum dots, in plural, as such an experimental setting is technically challenging because it requires a high degree of control over a sufficiently large system, composed of homogeneously coupled multidot arrays. Till now, that is. 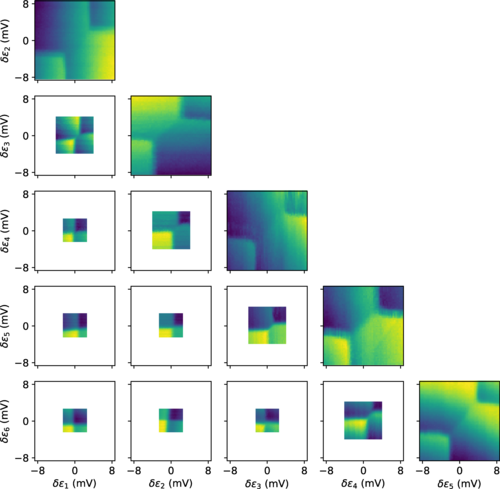 A team of researchers presents 1 a detailed examination of long-range electrostatic interactions between electrons confined to a semiconductor quantum dot system.

The scientists operated a six-site quantum dot array with homogeneous tunnel coupling and two charge sensors. They recorded a charge-stability diagram for each dot-dot pair in the array, thus explicitly accounting for non-nearest-neighbor interactions. From the analysis of these diagrams, the electron-electron interaction potential is derived as a function of distance. Interactions between electrons that are up to four sites away from each other were detected. The researchers modeled the interaction numerically, taking metallic gates as the main screening source, and found good agreement between experiment and theory.

The team explored some of the possible implications of these findings, including prospects for analog simulations of low-dimensional, artificial atoms and molecules that could improve existing numerical methods in quantum chemistry. Based on the numerical results, the scientists project that quantum dot arrays with approximately ten sites are sufficient for proof-of-principle simulations of molecular dissociation in a one-dimensional H2 -like molecule, something that is within reach of state-of-the-art experiments. They also foresee that these well-controlled quantum systems with long-range interactions could be useful for future investigations of other debated phenomena, such as Wigner crystallization, exciton formation, high-temperature superconductivity, and the nature of many-body excited states.

Interestingly, the researchers point that similar ideas to the ones discussed in this work may be explored in other suitable semiconductor systems such as transition-metal dichalcogenides where screening is significantly reduced.