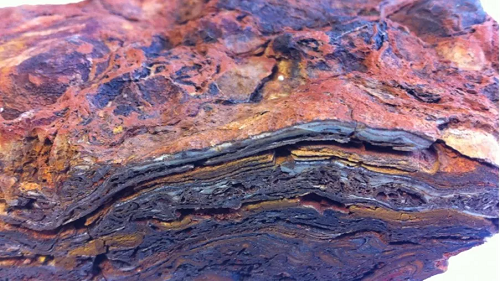 Researchers have found fossil evidence of what may be the first known life on Earth with the discovery of stromatolites, layered rocks formed by photosynthetic microbes, in Western Australia’s Dresser Formation that date back 3.48 billion years.

While many big fish populations show signs of strong recovery, chances for extinction continue to grow for many shark species. In comparing data on average age of reproductive maturity, abundance and changes in population biomass for five shark species with seven tuna species and six billfish species, researchers found the extinction risk for sharks continued to rise, while the extinction risk for the other large predator fish decreased.

Using lasers, researchers in Germany lowered the temperature of more than 20,000 potassium atoms to 60 nanokelvin, creating a quantum phase of matter called a Bose-Einstein condensate that the team was able to manipulate into a simulation of an expanding universe. According to the study, this work could help physicists understand the relationship between quantum effects and gravity in our own universe.

While spraying flowers with synthetic fertilizer does not change the appearance of the smell or colour of the plants for bees, a new study found the addition of fertilizer does alter a flower’s electric field, making it unattractive to the pollinators. “If you imagine that in terms of vision, it’s like that light is too bright and it’s blinding them,” said biophysicist Ellard Hunting, co-author of the study.

Turtles that spend cold months buried in frozen months survive by releasing a chemical called GABA into their brains to quiet the activity of neurons, and through the cold months, their brains generate a distinctive electrical pattern that is also seen in unconscious patients who have COVID-19. The finding might explain why patients who have been moved off ventilators can take weeks to regain consciousness, and the revelation also holds promise for informing development of therapies for protecting the brain from the effects of stroke and other health problems.