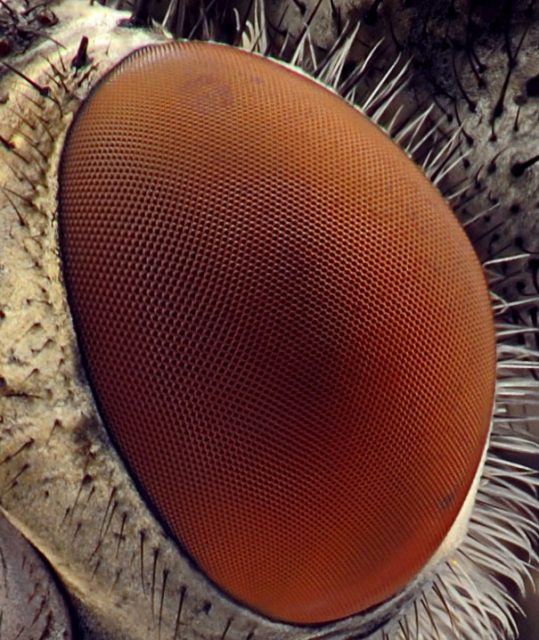 About 95% of the photoreceptors in our retina are rods, which we use for nocturnal vision, since they can detect single photons. During the day, rods saturate, and we use the other 5% of photoreceptors, the cones, which mediate color vision and do not saturate even at the highest light levels. There is still a third much rarer photoreceptor, the recently discovered light sensitive ganglion cell, which is active at most light levels. Flies do all this with only one type of photoreceptor (including the detection of different colors), with a much better temporal response and adding the possibility of detecting light polarization.

We know a great deal about fly photoreceptors. The chemical reaction that follows the capture of each photon and end up producing an electric signal is one of the best known biochemical amplifiers. But even here there are still many surprises.

Phototransduction begins with a photon being absorbed by the visual pigment rhodopsin, a photosensitive molecule in the membrane of the photoreceptor. Thanks to the extra energy transmitted by the photon, rhodopsin changes its shape, subsequently activating a cascade of other molecules in the interior of the cell. This process culminates with the opening of light-gated ion channels, letting cations into the cell and producing an electrical signal called “quantum bump”. However, how the biochemical reaction activate the ion channels was uncertain until very recently, when Roger C. Hardie and Kristian Franze published a surprising result in Science 1.

It was well known that after the photon absorption by a rhodopsin molecule, numerous small membrane phosholipids PIP2 break down (see Figure 1B), reducing the area they occupy in the membrane. Hardie and Franzen realised that perhaps this increased the tension of the membrane, mechanically opening ion channels. After all, some close relatives of the fly ion channels are suspected to play a role in mechanoreception in other cells. Short of mechanically squeezing the photoreceptor to elicit phototransduction (which they tried) the authors provided all the necessary experimental evidence to convince us that the light gated channels are activated mechanically to produce the electrical response to light.

First, they observed that the photoreceptors contracted about a micrometer or less when illuminated. Very careful Atomic Force Microscopy recordings combined with electrophysiology confirmed that this contraction shortly preceded the electrical response and not the other way around. Also, both signals were clearly the result of phototransduction, as evidenced by the fact that they dissapeared when intermediate products of the phototransduction cascade were blocked.

In a normal fly photoreceptor, incoming calcium cations act as a negative feedback, stopping the production of intermediate products and terminating phototransduction. When ion channels were blocked to prevent this influx, the contraction increased in magnitude and duration, as expected if it was produced at the end of the phototransduction process and not caused by osmotic pressure changes. The contractions are then likely to be produced by the breakdown of PIP2 from the membrane.

The contractions of the photoreceptors measured by Hardie and Franze were very small. To see if this contraction was sufficient to activate mechanosensory channels, they eliminated all light sensitive channels in the photoreceptor and substituted them by gramicine, one of the best studied mechanosensory channels, and discovered that they still responded to light. The failure to elicite phototransduction by squeezing the cell was justified by Hardie and Franze as the impossibility to mimic the exact characteristics of the contraction. However, the authors did show that changes in osmotic pressure either facilitated or reduced channel activity.

After many years looking for the missing messenger that mediated the activation of the light gated channels, it seems now that this… could be mechanical pressure on the membrane itself, combined with a decrease in pH in the cell. Similar movements could be generating electrical signals somewhere else in the brain.

As pointed out by Kirkwood and Albert last January 2, this is not the only recent result that puts the focus on the close relationship between vision and mechanoreception. In a recent paper in Cell 3, Pingkalai R. Senthilan and his colleagues identified 274 auditory genes in Drosophila, discovering that they express many of the proteins encountered in the photoreception cascade, even four out of the seven fly rhodopsins! The authors found that the presence of rhodopsins in the fly auditory organs is necessary. Despite presenting a normal anatomy, the electrical response decreased or disappeared in mutants not expressing some of those rhodopsins.

These studies contribute to put mechanical interactions together with chemistry and electricity into the toolbox that cells use for signalling. The nervous system may have more in common with the electromechanical computers of Konrad Zuse than anyone ever expected.