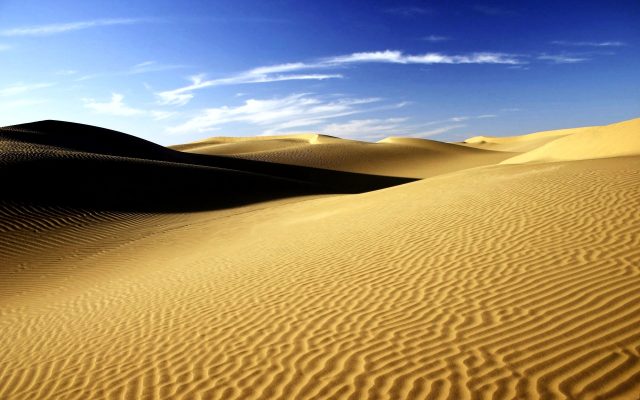 An abrupt and widespread climate shift in the Sahara 5,000 years ago

The Sahara Desert’s shift from lush grasslands to barren sands happened quickly and simultaneously across the entire region. Scientists say the brief African Humid Period began and ended suddenly, about 5,000 years ago.

A strange sound made by a close relative of the baboon could be evidence of the origins of human speech. The study found that the gelada species makes sounds similar to human speech. In addition to the sound, which scientists have dubbed a “wobble,” the gelada can also make certain mouth movements, which researchers earlier speculated was related to speech.

Japan hunter-gatherers may have used pottery for cooking
Japanese hunter-gatherers living during the end of the ice age may have turned to pottery as a source of cooking. The study details an analysis of charred material from various ceramic vessels and fragments that revealed some of the earliest evidence of cooking using pottery. Scientists also say they found traces of fatty acids belonging to creatures such as fish and other marine animals. The resulting substance would have only resulted after prolonged exposure to heat — suggesting long periods of cooking time.

Viking sailors used complex tools to navigate north to south
Vikings may have relied on complex sundials among other tools to determine latitude. The research looked at a Viking sundial discovered in Greenland that scientists believe may have been used to determine latitude, or north-south navigation. It seems they used much more sophisticated navigational instruments than we thought before.

Balázs Bernáth et al. (2013) An alternative interpretation of the Viking sundial artefact: an instrument to determine latitude and local noon Proceedings of the Royal Society A DOI: 10.1098/rspa.2013.0021