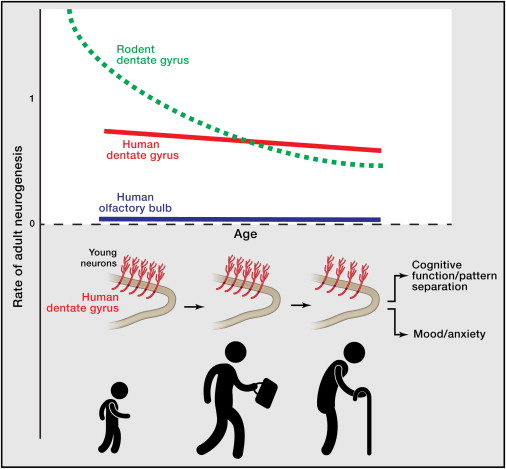 It was commonly assumed that no new neurons are formed in the adult mammalian brain, even after the first results showing neurogenesis in rodents were published in the 1960s. Further work in mammals and birds during the 80s contributed to change the scientific consensus, but it was the discovery of adult neurogenesis in humans in the 90s that caught the interest of the scientific community.

We know that adult neurogenesis is only important in certain areas of the mammalian brain. The first area is the subventricular zone, providing neurons that migrate to the olfactory bulb, and a second one is the subgranular zone in the dentate gyrus, a part of the hippocampus that we only find in mammals. Finally, there is also some less clear evidence about adult neurogenesis in other zones such as the cerebellum and the cortex.

What is the function of the new cells? How important are they for fitness? It has been sometimes argued that adult neurogenesis is an ancestral trait, much less present in the bigger and more complex brains of mammals and birds. However, studies in birds show that neurogenesis is associated with particular recent structures, for example the song control centres, and that this neurogenesis is seasonally dependent and critical to song production. The dentate gyrus in mammals is also an evolutionarily recent structure and some scientists argue 1 that adult neurogenesis there could be necessary for functions such as distinguishing two memories in time. What about humans? Obtaining good estimates of formation rates of new neurons at different ages in different parts of the brain would contribute to this debate. But this rate was difficult to estimate in humans, at least until scientists started carbon dating neurons.

Normal radiocarbon dating measures the age of organic material up to several tens of thousands of years old, often with an uncertainty of dozens of years, making it an unlikely tool for the neuroscientist. Normal carbon dating is based in the constancy of C14 fraction in the atmosphere across history, compared with its slow exponential radioactive decay towards the stable N14 isotope in the object of study. However, carbon dating of neurons can produce a much smaller uncertainty by using the fact that the 14C fraction in the atmosphere did change during the last century… and quite dramatically.

The United States, the Soviet Union, United Kingdom and France carried out more than five hundred nuclear bomb tests in total between 1945 and 1963, most of them in the atmosphere or on the ground’s surface. As a consequence, the levels of C14 in the atmosphere skyrocketed to double their original values. In 1963, the first three countries signed the Partial Nuclear Test Ban Treaty, banning all nuclear tests except underground. Since then the fraction of C14 in the atmosphere has been relaxing exponentially towards pre-1945 levels (see Fig1).

This excess in C14 in the atmosphere was incorporated into plants by photosynthesis, and from there into the trophic chain. In particular, each cell resulting from a mitosis will synthetise its new DNA with a C14 concentration mirroring (with a delay) the C14 concentration in the atmosphere at that time. The carbon content in the DNA changes very little afterwards (via DNA repair processes, for example) and C14 half life of 5730 years is long in comparison with the life of an individual. As a consequence, using data of the changing levels of C14 in the atmosphere, we can use the carbon fraction “signature” in a neuron to know how long ago it was born.

Used for the first time as a forensic tool and then to study fat turnover, Spalding and her colleagues used it in 2005 to confirm that there is not appreciable adult neurogenesis in the human cortex. It took almost a decade, however, for them to adapt the technique to study the rate of neurogenesis in the smaller structures of the olfatory bulb 2 and hippocampus 3. They present their results in two recent papers.

They obtained tissue from autopsies and they isolated cell nuclei. They used specific antibodies to separate neuronal nuclei from the nuclei of other cells. Then the DNA was purified, its carbon content extracted and the fraction of 14C analysed using mass spectrometry.

It is still technically impossible to experimentally obtain the C14 fraction from single cells, and the analysis was carried out combining the carbon of all the neuron nuclei of each sample. Even there, the quantity of carbon was so small (10 micrograms), that new techniques had to be developed. To compared to the measured data, they developed simple mathematical models predicting the 14C ratio, considering different populations of cells with different replacement and death rates, and fitted them to the data to obtain an estimate of the neurogenesis rate at different ages.

They also analysed nonneuronal cells from the same areas (such as glia), and they obtained an annual turnover of up to 3.5% per year, changing very little with age. In comparison, turnover in neurons was much smaller. In the olfatory bulb they estimated that the big majority of neurons were as old as the individual, and that new neurons apeared with a turnover of 1% per century. In the hippocampus, however, Spalding, Bergmann and collegues found that the results were best fitted assuming two neuron populations, a majority with no apreciable turnover and a small group (one third of the population, possibly representing the dentate gyrus) with appreciable turnover rates of 1.75% per year even during adulthood.

The results suggest that adult neurogenesis in the olfatory bulb is practically non existent in humans. On the other hand, they find strong evidence for a substantial neurogenesis in the human hippocampus (around 1400 new neurons per day, most probably all integrated in the dentate gyrus), with only a modest decline with age. This supports the thesis of neurogenesis in adults having functional importance.

Many experiments show the importance of adult neurogenesis in rodents. Lack of exercise or stress has been liked with a decrease in production of new neurons, and a decrease of neurogenesis has been connected to depresion and anxiety. However, until now, it has been difficult to do the same connections in humans. Bergmann, Spalding and their colleagues think that their approach could also shed some light in the problem. They found great interindividual variation in humans, and they believe that combining their approach with the study of medical histories of the patients could reveal some link between neurogenesis and psychiatric diseases.

How neurons select the best links.