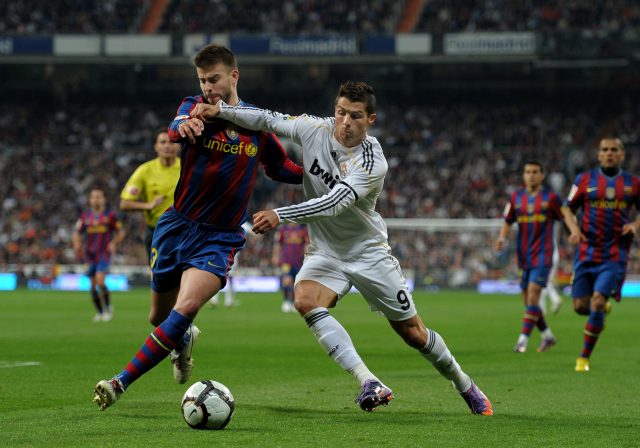 (1) Imagine you are watching on the TV your favourite football match, Real Madrid vs. Barcelona, and that you can choose on your remote two digital channels in which the game is being broadcast, Telemadrid and TV3 (the Catalan public station). The experience of watching the match in one or other of these two channels makes no trivial difference, besides the obvious point that they are in different languages (but Catalan is easy enough to understand for madrileños like myself); even if the transmitted visual signal is exactly the same, the commentators say very different things: they don’t judge in the same way the moves and fouls, they don’t interpret in the same way the gestures of the players and managers, and they don’t draw the same conclusions as to the relevance of the scores. It makes a lot of sense to prefer watching the match on one of the stations instead of the other, depending on your sympathies and leanings, and even if what you are looking for is just to get angry.

But there is one thing that you might be tempted to do, whereas it is something completely silly: suppose you thought that the result of the match would be more favourable to your preferred team (say, Barça) if you just saw it on the Catalan channel. Perhaps what movie premieres are more interesting, what political party is fighting more resolutely against internal corruption, or even what country, faction or coalition is winning a war, decisively depends on what TV news you prefer to watch. But it is simply absurd to select one source of information or another if by your choice you are attempting to find out that your preferred team has won the match, or that your preferred party has won the elections, or that a new novel of your preferred writer has just been published.

Of course we can conceive of bizarre cases in which there is no agreement on who won, or on whether the novel has been published or not, but in the usual flowing of everyday life there simply are lots of things that it is pointless to try to confute just by reading a different newspaper or by sitting in different seats in the stadium. Obviously, I don’t ignore that many things that happen during the football match depend on, and are subjected to, conventions, negotiations, situated perceptions, conflicting interests, and arbitrary decisions (by the way, the Spanish word for ‘referee’ is árbitro). I don’t even ignore the truism that there are many cases in which it is difficult to establish the limits between what depends to a higher extent on those things and what is more independent of them. But all of this does not say anything against the fact that there are many other things whose public, intersubjective, inescapable being-there constitutes the point of having an interest in watching, not to say playing, a football match. For example, it can often be difficult to appreciate an offside, but precisely because it is difficult, the referee and the players must take into account the linesman’s rising of the flag, a type of event that is formally regulated just to make it uncontroversially observable in a range of circumstances much wider than those in which a borderline offside is so.

(2) Let’s call ‘positive facts’ those events that can become uncontroversial, not in the sense that controversies about them are forbidden, but in the sense in which those common, publicly observable events that constitute a precondition of our co-existence with other human beings and our everyday interactions with our environment ‘impose themselves on ourselves’, making pointless for us to deny them. Of course, no one of us is absolutely infallible in those observations, and at times bitter disputes may arise about some presumed ‘facts’, but this is far to be a formidable argument against the thesis that the stream of our daily life smoothly runs within the bed of a plentiful of ‘positive facts’.

Though a Descartes or a Feyerabend may try to persuade us of the doubtfulness of those presumed ‘positive facts’, I shall not enter here into a metaphysical disputation about the possibility of a Matrix-like nightmare: perhaps our full life is such a fiction, but nevertheless there is a relevant distinction within that fiction (or whatever it happen to be ‘in itself’) between those events that are legitimately taken as ‘positive facts’ and those that are not, and it is this difference the one on which I want to build my ensuing arguments.

Some positive facts become ‘established’, in the sense that there has been an institutional process ending in the ‘public’ recognition of them, for example, the result of the match in the official table of the Spanish league. Of course, ‘public’ is a relative notion, for it always refers to some specific group of people; but what makes a result ‘public’ is the effort of this group for letting ‘anyone’ examine or contest the process that has led to the establishing of the fact. Furthermore, ‘established facts’ range further than ‘easily observable events’. In many cases, they can be difficult to observe indeed (e.g., athletic races decidable only via photo finish), or not ‘observable’ at all (e.g., the chemical composition of water), even not referring to physical events (e.g., that there are infinite primes; by the way, the recognition that Real Madrid defeated Barça by 3-2 entails that you and me are capable of seeing that 3 is more than 2).

Many philosophical criticisms of the sciences, sound and reasonable as they can be in many other things, often tend to forget the distinction between established facts and other types of claims or hypotheses. For example, though the ultimate nature of atoms and particles is unknown, and our best theories about the topic are at best good approximations that future theories, based on concepts we cannot imagine by now, will surely revise in very fundamental aspects, it is absurd to deny that more than 80 % of the mass of a litre of water corresponds to oxygen, or that there are about 334 times 1023 water molecules in it. In one thousand years our grandsons will no doubt have very different conceptions from ours about mass and molecules, and this will make them interpret those established facts in relatively different ways, but they will surely accept it as we do. To deny this is as absurd as to affirm that, if the arithmetic of the Spanish football league’s table were kept by intuitionist mathematicians, the results would have made a different team to win the competition.

We can consider the concepts ‘established’ and ‘scientifically established’ as synonyms, not because there is a priori a certain type of methods of verification that belong to science and happen to be cognitively superior to the rest of the procedures for (say) the generation of beliefs. Rather, the question is that we must start by considering every method of research and then discuss whether it actually leads to facts that we consider as ‘established’, or not; if the answer is ‘yes’, we shall just include that method within the ‘scientific’ ones. Hence, any epistemic procedure (those employed by Buddhist monks, by hermeneutic philosophers, or by Midwest car dealers) can in principle be considered as ‘scientific’: the only thing that is needed for that is that the proponents of those methods show that they lead to intersubjective results that are robust enough to critical examination.

Positivism is a humanism (a manifesto) (2/3)

Positivism is a humanism (a manifesto) (3/3)