Boron, in the periodical table situated in the 13 group (group III according to the former nomenclature), is a semiconductive element with properties between that of a metal and a nonmetal. Boron compounds are widely used materials in various branches of industry. Recent studies show its importance in biology as for example to various metabolic, nutritional, hormonal, and physiological processes.

One can mention the importance of the other 13 group elements (triel elements), aluminium, gallium, indium and thallium. For example, aluminium is the second-most used metal after steel, largely because it is so versatile while nearly all gallium is used today in electronics. Numerous advantageous properties of triel elements are a consequence of the acidity of their compounds – the triel centres are strong Lewis acids in different chemical species. Such acidity of triel centres in simple moieties is briefly described here.

The acidity and basicity are fundamental concepts in chemistry; in terms of the Lewis theory, they are defined as the capacity to accept an electron-pair or to donate an electron-pair, respectively. These terms are very useful to describe inter- and intramolecular interactions. For example, the A-H…B hydrogen bond is the interaction between the B Lewis base centre often characterized by the lone electron pair (the electron-pair donor) and the positively charged H-atom which is the electron-pair acceptor (Lewis acid centre). In a case of the A-X…B halogen bond (X designates the halogen atom) B, similarly as for the hydrogen bond, is the Lewis base centre possessing at least one electron-pair and the X-halogen atom is characterized by the positive electrostatic potential in the elongation of the A-X bond thus it may act as the Lewis acid centre. The A-H…B hydrogen and A-X…B halogen bonds were described in the article ¨The halogen bond – the interaction similar to the hydrogen bond¨ in the Mapping Ignorance website. The Lewis acid – Lewis base interactions are often utilized to interpret the mechanisms of chemical reactions. In case of the borane-based Lewis acids their key role as catalysts in organic synthesis is often analyzed. The strong Lewis acid properties of boron and other triel centres are the result of their electron structure. For example, in trihydridoboron, BH3, and boron trihalides, boron is electron deficient since it has six electrons, i.e. three B-H -bonds, in the outer shell. The similar situation is observed for the analogues triel compounds. The mentioned here electron deficiency concerns the vacancy of the p-orbital being perpendicular to the plane of the molecule (Scheme 1).

This situation (Scheme1) leads to strong electron accepting properties of triel centres in the direction perpendicular to the molecule considered. This also suggests that the interactions between the triel atoms and Lewis bases are characterized by the dominance of contributions reflecting the electron charge shifts being the result of complexation. Complexation should be understood as a formation of a complex between the Lewis acid unit (here the triel species) and the Lewis base. 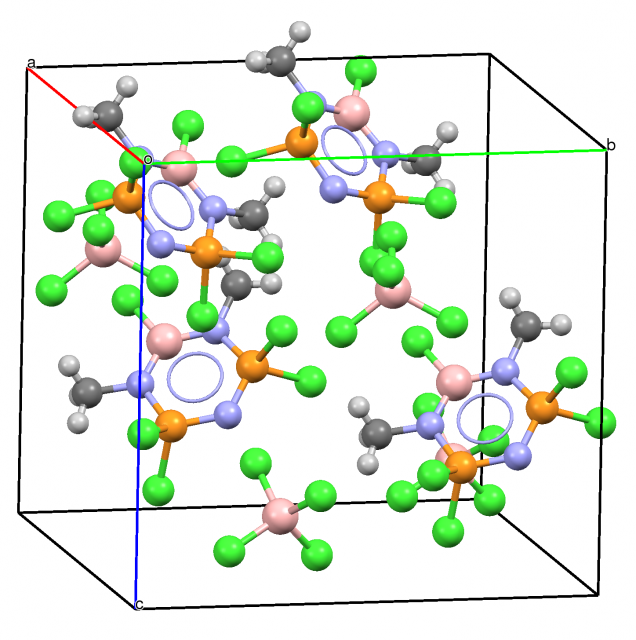 This is interesting that usually the interactions of trivalent triel centres with Lewis bases lead to the creation of a next covalent bond, i.e. to the increase of the valency of the triel atom or at least for the trivalent triel atom the additional Lewis acid – Lewis base link possesses the properties of the covalent bond is formed. Figure 3 presents the crystal structure reflecting such a situation where the (BCl3)(C2H5)2O species may be considered as the product of the reaction of the trichloro borane, BCl3, with the diethyl ether, (C2H5)2O. 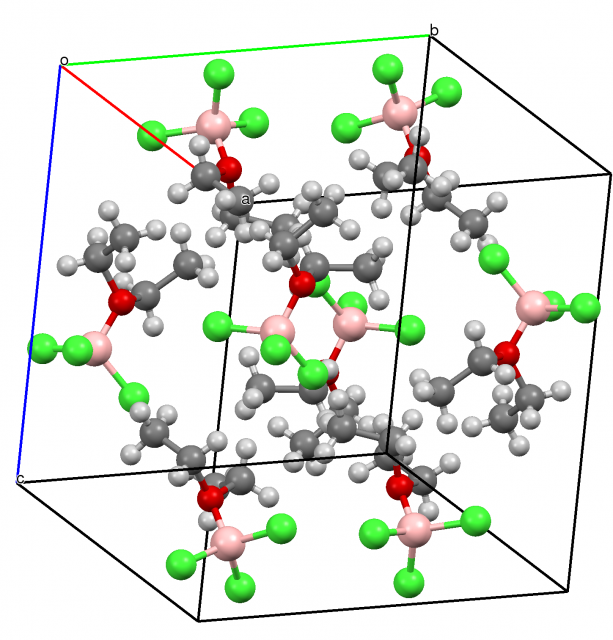 Sometimes the increase of the valency of the triel atom up to five may be observed. For example, pentacoordinate boron compounds have been postulated early as transition states of SN2 reactions. The reaction of the BH3-CO species with the N(CH3)2 is an example of such a situation 12. Note that there is formally vacant p-orbital for the BH3 molecule, for the boron trihalides and for other triel analogues, i.e. two p-orbital lobes are observed (see Scheme 1). This means that the nucleophilic attack, i.e. the interaction with the Lewis base, may be observed in two directions since the Lewis base may approach each of lobes of the vacant p-orbital. Such a situation was analyzed recently theoretically at the MP2/aug-cc-pVTZ level of approximation 3. Figure 4 presents the GaF3(NCH)2 species being the result of interaction of GaF3 with HCN in two directions mentioned earlier here. One can see that the GaF3(NCH)2 moiety is characterized by the planar GaF3 central part and two HCN ligands forming links with the Ga-centre. Hence the whole structure may be classified as the trigonal bipyramid. Such structures are typical for the transition state of the SN2 reaction 4 but the GaF3(NCH)2 complex corresponds to the energetic minimum. On the other hand the mentioned above complex of the BH3-CO species with the N(CH3)2 molecule analyzed experimentally reflects the situation of the transition state. However the mechanism of the electron charge shift is the same for both cases. There is the electron charge shift to one lobe of the p-orbital of boron from the CO ligand and to the second lobe of boron from the electron-pair of the N(CH3)2 molecule for the transition state structure.

It is important for the formation of the pentavalent triel centre that the ligands interacting with the triel atom should be relatively strong Lewis bases but not very strong. For example for the BF3 molecule interacting with very strong F– Lewis base the BF4– anion is the product of reaction. The latter species can not interact further with the next Lewis base ligand to form the pentavalent boron species since the whole BF4– molecular surface is characterized by the negative electrostatic potential. Additionally, because of the steric effects there is no an access to the tetrahedral B-centre for the next ligand. In the case of weaker HCN or N2 Lewis bases the pentacoordinated triel atom may be formed (Fig. 4).

The chemical bond – is this term still useful or should it be replaced by another one?

The strongest acid yet gentlest – how could it be?