It was reported last year that the carborane superacid H-(CHB11F11) (see Fig. 1) was synthesized and that its primacy of the strength over all other known superacids was confirmed 1. This is an extremely sensitive to moisture solid which was prepared by a treatment of the [(C2H5)3Si-H-Si(C2H5)3][CHB11F11] compound with the anhydrous HCl. This new compound dethroned another carborane related superacid, i.e. H-(CHB11Cl11), the latter being ¨the king of strength¨ among acids during few last years, till 2014. This is interesting that the carborane superacids are gentle and non-corrosive compounds. How could it be? One may expect the strongest acid to be extremely reactive, toxic etc, note that a strong mineral HF acid dissolves glass!

This is possible since the acid strength is defined as the possibility to release the hydrogen (proton); the strongest acid loses the proton the easiest according to the commonly known reaction HA  H+ + A–. In a case of the H-(CHB11F11) acid the hydrogen connected with fluorine (see Fig. 1) determines its acidity. This is worth to mention here that the corrosiveness of the acid is connected with the chemistry of the anion (A–). This is why the strong HF acid dissolves the glass since the fluorine anion as a strong nucleophile reacts with silicon breaking the Si-O bond.

The anion of the strongest acid is the least basic; one may say that the acid, HA, loses easily the proton and that the corresponding base, A– anion, attracts this proton with difficulty. The scale of the strength of acids introduced recently is connected with the latter statements 2; precisely it concerns the basicity of A– anions where the least basic anion corresponds to the strongest HA acid. This is the NH scale which ranks the hydrogen bond acceptor ability of A– anions in complexes with the trioctylammonium ion (see Fig. 2). The stronger the basicity of A– anion, the weaker is the corresponding HA acid and the lower is the N-H stretching frequency. For example, the NH experimental frequencies (measured in CCl4) for the trioctylammonium ion interacting with the Cl– and NO3– anions corresponding to the known HCl and HNO3 mineral acids are equal to 2330 cm-1 and 2451 cm-1, respectively [2]. It means that HNO3 is a stronger acid than HCl according to this NH scale.

On the other hand, these frequencies for the complexes with the CHB11Cl11–and CCH3B11F11–anions corresponding to the carborane acids amount 3163 cm-1 and 3219 cm-1, respectively; much more than for the known mineral acids. This is interesting that the higher the NH stretching was detected for the B(C6F5)4– anion complex, 3233 cm-1, what may mean that the corresponding H-B(C6F5)4 acid should be the strongest one. However this is not true! The latter species does not exist because of the acid cleavage of the B-C bond. Relatively basic solvents may neutralize the proton acidity to prevent such cleavage, like for example in diethyl ether where the following species exists – [H(Et2O)2+][B(C6F5)4–]. In spite of the fact that the acidity of the solvaled cations is usually million times lower than of the ¨naked¨ cations it is still high to classify the corresponding compounds as the super acids. One may mention here the other bases, like for example PF6–, SbF6– or BF4– which are often not correctly considered in the literature as anions corresponding to super acids. That is worth to note that the corresponding acids do not exist, only if H+ cations are involved in interactions with the solvents, as for the mentioned above B(C6F5)4– anion.

The term ¨super acid ¨ was used few times before here. The latter one was introduced early on to designate the acids which are stronger than the conventional mineral acids; it is commonly accepted that super acid refers to the species with an acidity greater than of 100% pure sulphuric acid; the modern definition claims that super acid is a medium in which the chemical potential of the proton is higher than in pure sulphuric acid.

Numerous carborane acids may be classified as the super acids, they are much stronger than the traditional mineral acids; and this concerns not only chlorine and fluorine species mentioned earlier here but also the moieties where hydrogen atoms in [CHB11H11]–ion are only partly replaced by the halogen atoms, or it also concerns other similar and related compounds; one can mention; H-(CHB11H5Cl6), H-(CHB11H5Br6), H-(CHB11H5I6), H-(CC2H5B11F11) etc. The other scales were also applied to prove the carborane acids are classified among the strongest ones; these are: the 13C NMR chemical shift difference between appropriate carbon atoms; the measurement of the gas phase entalphy of deprotonation, the calculation of the dissociation energy, the use of the logarithmic Hammett acidity scale etc [1,2]. All of them confirm that the carborane acids, in spite that they are gentle yet they lose proton easily; easier than any other known chemical species.

The carborane acids differ significantly from the other super acid media, they are usually crystalline solids thus easily handled. They often react with alkanes leading to their protonation; for example, the H-(CHB11F11) acid form the [H3O+][CHB11F11–] complex with water or it reacts with benzene forming the benzenium ion salt; [C6H7+][CHB11F11–]; this fluorine carborane acid (till now the strongest acid) reacts even with butane. Fig. 3 shows the fragment of the crystal structure of toluenium 7,8,9,10,11,12-hexabromo-1-carba-closo-dodecaborate toluene solvate which may be treated as a product of the reaction of the H-(CHB11H5Br6) super acid with toluene: the hydrogen atom attached to one of bromine centres is released easily leading to the formation of toluenium cation and the CHB11H5Br6– anion 3. 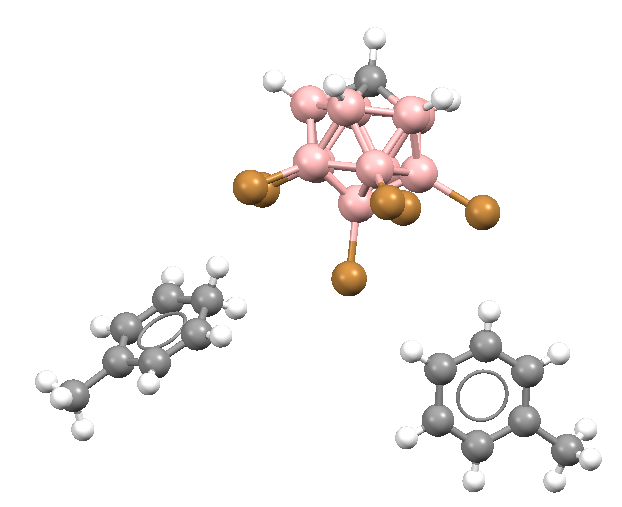 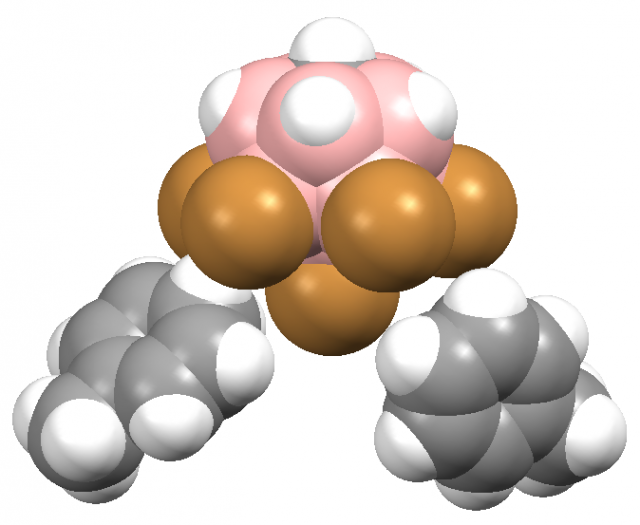 Figure 3. The fragment of the crystal structure of toluenium 7,8,9,10,11,12-hexabromo-1-carba-closo-dodecaborate toluene solvate (left); grey – hydrogens, black – carbons, brown – bromines, pink – borons; the structure taken from ¨The Cambridge Structural Database: a quarter of a million crystal structures and rising¨, F.H.Allen, Acta Cryst. 2002, B58, 380-388; the same fragment with van der Waals spheres is presented at the right side.

Figure 4 presents the benzenium ion salt – [C6H7+][CHB11F11–]; such a crystal structure being the product of the protonation of benzene, C6H6, by the carborane super acid, H-CHB11F11 was reported recently [1]. However the figure shows the result of B3LYP/6-311++G(d,p) calculations 4 corresponding to the complex being in the energetic minimum. One can see the excellent agreement between experimental results (crystal structure) and theoretical investigations (calculations). The benzene moiety ¨holds¨ the proton stronger than the carborane acid what results in the formation of the benzenium cation. Finally, one may ask of the significance of the studies briefly presented here. It is often stated in the literature that superacids are very effective in numerous reactions, one can mention they are very effective catalysts for a variety of electrophilic transformations of hydrocarbons, both saturated and aromatic ones. Other numerous reactions of superacids are of substantial practical interest 5.

The chemical bond – is this term still useful or should it be replaced by another one?

Boron and other triel elements as strong Lewis acid centers

The halogen bond – that interaction similar to the hydrogen bond

Beryllium: closer than ever, not bonded though

Strange molecular systems in the atmosphere of Titan