Usually, optical activity is understood as the ability some substances have to change the handedness of polarized light when it goes through them. Molecules that show optical activity have no plane of symmetry. So-called chiral matter broadly describes structures for which left- or right-handed mirror images are non-superimposable, or, equivalently, that lack improper rotation axes. The commonest case of this is in organic compounds in which a carbon atom is linked to four different groups. An atom of this type is said to be a chiral centre. Thus, molecular chirality is generally considered to be a geometrical property associated with the spatial arrangement of the nuclei in the molecule, and optical activity is understood in terms of the quantum theory of the interaction between light and electrons and molecules. Asymmetric systems characterized as ‘chiral’ play a special role across biology, chemistry and physics.

Chiral matter offers opportunities for the exquisite control of electron and spin transport due to extraordinary optical, electronic, and magnetic properties that depend on the structure’s handedness. Importantly, these properties are often observed at or near room temperature, which suggests that quantum devices based on chiral matter and fields have the potential to operate at similar practical temperatures if properly designed.

Crystals are structurally chiral if they possess no mirror, inversion or roto-inversion symmetry, giving rise to left- and right-handed enantiomers. This chirality can be imprinted on the crystals’ emergent excitations, which are then also characterized by a definite handedness. The interaction between structural chirality and the breaking of time-reversal symmetry is of particular interest, as it links the static chirality to temporal processes, such as growth, catalysis and wave propagation. Response functions that jointly arise because of chirality and time-reversal symmetry breaking are
called magnetochiral anisotropies.

Specifically, in metals, electronic magnetochiral anisotropy (EMA) – a change in resistance due to an applied current and an external magnetic field – opens up possibilities to detect, manipulate and utilize chiral properties in electronics.

In order to display EMA, a conductor must break inversion symmetry, which can occur as a weak effect in any metal when its macroscopic shape is chiral, for example, in a coil. Alternatively, materials with chiral crystal structure generally show EMA in any conductor shape.

EMA expresses an imbalance between scattering processes of different handedness, which can occur either from the intrinsic handedness of the carriers in chiral crystals, or extrinsically from chiral defects, as in plastically twisted conductors. When electronic interactions form ordered phases within chiral materials, as, for example, in chiral magnets, EMA can be further amplified via scattering off, for example, an emergent chiral spin texture. 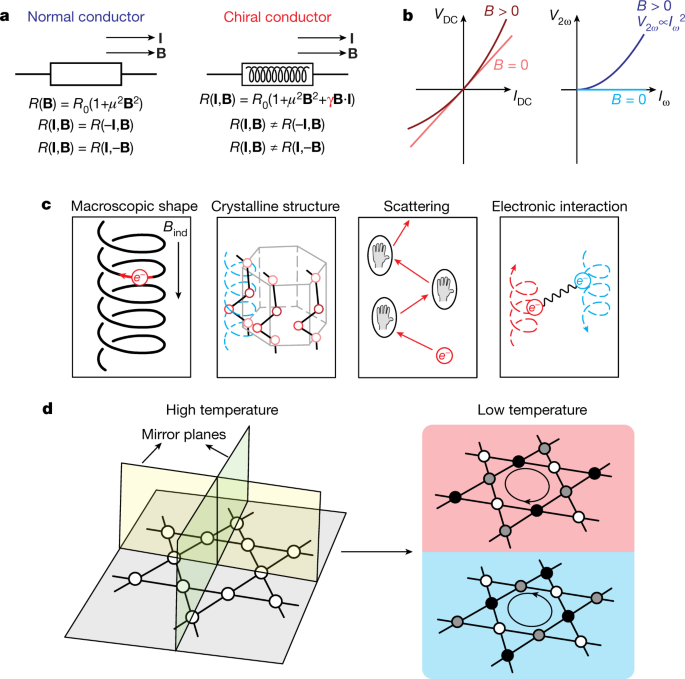 Now, a team of researchers demonstrates 1 EMA in a rectangular bar of centrosymmetric CsV3Sb5, a layered metal in which vanadium atoms form kagome nets. Chiral transport is observed via second-harmonic generation under an in-plane magnetic field.

The EMA signal becomes significant only at temperatures below 35 K, deep within the charge-ordered state of CsV3Sb5 (94 K). This temperature dependence reveals a direct correspondence between electronic chirality, unidirectional charge order and spontaneous time-reversal symmetry breaking due to putative orbital loop currents.

The researchers show that the chirality is set by the out-of-plane field component, and that a transition from left- to right-handed transport can be induced by changing the field sign. CsV3Sb5 is the first material in which strong chiral transport can be controlled and switched by small magnetic field changes, in stark contrast to structurally chiral materials, which is a prerequisite for applications in chiral electronics.

Although the small absolute magnitude and extreme environmental conditions probably preclude direct applications of CsV3Sb5, these results showcase that spontaneous symmetry breaking can be used to transform small changes in external fields into singular changes in the response functions of chiral conductors.

More on the subject:

Detection of the reversal of magnetic moments in an antiferromagnet