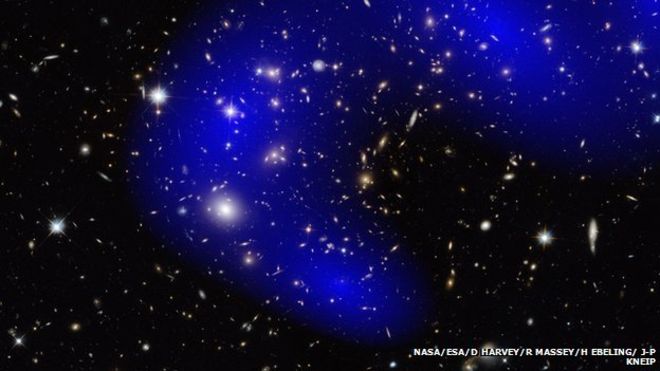 Dark matter detected as it coasts through galaxy collisions

Dark matter appears to drift straight through galactic collisions, barely interacting with anything, including other dark matter, according to scientists who detected the mysterious stuff by the way it bends nearby light paths. Researchers used visible light spied by the Hubble Space Telescope and X-rays by the Chandra Observatory to view 72 galaxy collisions.

As ice seasons shorten, polar bears are spending more time on land, and their impact is being felt in the bird population. Hungry polar bears are dining on as much as 90% of eggs laid by such birds as barnacle geese, common eiders and glaucous gulls, and while those birds are not classified as endangered, the bears’ altered dining habits could have a lasting impact on their nesting habits.

The latest outbreak of Ebola doesn’t appear to have any unusual mutations. The finding appears to refute the idea that the deadly epidemic was caused by a new, virulent strain. The study posits that the outbreak was so overwhelming because of where it occurred, at the crossroads of three countries.

Researchers used a mathematical method to calculate an estimate of Saturn’s rotation. Their measurement of 10 hours, 33 minutes is a few minutes swifter than earlier estimates by the Voyager 2 and Cassini space probes. While such an uncertainty may appear small compared to the approximately 10.5-hour rotation of Saturn, it is actually important to know it accurately. The rotation period has an important effect on understanding Saturn’s atmosphere dynamics and internal structure.

Unique form of square ice created between sheets of graphene

A new form of ice has been created by scientists who flattened a water droplet between a pair of graphene sheets, locking the atoms into a square grid pattern. Researchers believe the square ice may be a new crystalline phase of ice.