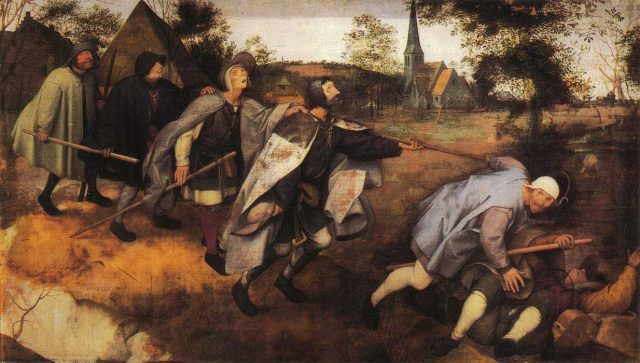 Blindness is a world wide problem. As of 2012 there were 285 million visually impaired people in the world, of which 246 million had low vision and 39 million were blind. Most people with poor vision are in the developing world and are over the age of 50 years.

One basic aspect for quality of life of blind people is the capacity to travel and move independently. Orientation is therefore a crucial capacity and different tools have been designed to help with this task. The most simple, the white cane with a red tip, the international symbol of blindness, is used to extend the user’s range of touch sensation. It is usually swung in a low sweeping motion, across the intended path of travel, to detect obstacles and to locate known landmarks. Other options for blind people to navigate are guide dogs, GPS devices, tactile paving and audible traffic signals. Some blind people are even skilled at echolocating objects by producing mouth clicks and listening to the returning echoes. The visual cortex of these blind echolocation experts process the sound information provided by the echoes.

The allocentric sense is the awareness of one’s body relative to its surroundings, to the environment, and it is one of the main aspects that underlie spatial navigation, the movements in a three-dimensional space. Since under normal conditions the brain relies mostly on information from the eyes, one of the main problems for blind people to move in open or closed spaces is precisely the lack of external references, creating a distortion of absolute directions, of the position of their heads and bodies related to streets or furniture. If you cover your eyes and try to navigate your home without touching walls you will almost certainly impact on something because it is very difficult to maintain straight directions without cues. Blind individuals can rely on other senses—the smell of a nearby park or the sound of passing traffic—but many locations lack useful cues from other sensory modalities.

Hiroaki Norimoto and Yuji Ikegaya 1, researchers at the University of Tokyo, wanted to explore whether a mammal could use allocentric sense to replace vision. The Japanese team provided artificially-blind rats —their eyelids were sewn— and implanted them microstimulators coupled with a digital geomagnetic compass. The implants were carried out bilaterally in the primary visual cortex, the part of the brain that normally receives the inputs from the retina.

When the rats moved their heads, the sensors generated electrical impulses to the cortex that tell them which direction they were facing: when a rat’s head faced within 20° of due north, the implant sent electrical pulses to the left side of the visual cortex. When the animal’s head was south, the pulses were relayed to the right visual cortex. The electrical shocks were not perceived as they would on the skin. Usually, people whose visual cortex was electrically stimulated reported that saw a white dot (the typical stars «seen» by cartoons when they are hit on the back of the head, i.e. when their visual cortex is mechanically stimulated). It is therefore possible that the rats perceived that the positions of these white dots or stars represented their head directions.

Then, if the animals keep a straight pathway, there is no input but if they change their trajectory, the system provides a stimulus, a warning, a reference. The rats were then trained to seek food pellets in a simple maze (a T-shaped labyrinth) or a more complex maze.

Within tens of trials, this is just in four days, the «blind» rats were able to manage the geomagnetic information and navigate the mazes as well as rats that could see. They found the hidden food in more than 80% of the trials. When the compasses were removed, the animals lost their ways again—suggesting that they hadn’t just memorized a route, but were using the directional information to navigate. Both experimental and control animals showed similar performance levels and navigations strategies, i.e., results were similar between the blinded and implanted rats and those of normal sighted, intact rats. In this way, blind rats can recognize self-location through extrinsically provided stereotactic clues.

These results help shed light on how the brain processes sensory information and could lead to design new devices that help blind people independently navigate their surroundings. «The most plausible applications —informed Yuji Ikegaya, one of the authors, to the New York Times 2— is to attach a geomagnetic sensor to a cane so that the blind can know the direction via tactile signals such as vibration».

One doubt is whether the system would similarly operate with animals that are truly blind. It is possible that such rats might need a longer time to understand the meaning of geomagnetic information and to learn to use it as a navigational tool but it seems very possible that the animals would be able to do it.

Finally, the other author, Hiroaki Norimoto said to Science 3 that the results demonstrate the brain’s impressive capacity for taking advantage of new sensory information opening a futuristic array of possibilities: «I expect that humans can expand their senses through artificial sensors, including those that convey geomagnetism, ultraviolet rays, radioactive rays, humidity, pheromones, ultrasonic sound, or radio waves». There is an Arab proverb that says that «eyes are useless for a blind brain» but this study shows that a brain can see without eyes.

Pseudo-hallucinations: why some people see more vivid mental images than others – test yourself here

One sense less, one more equation