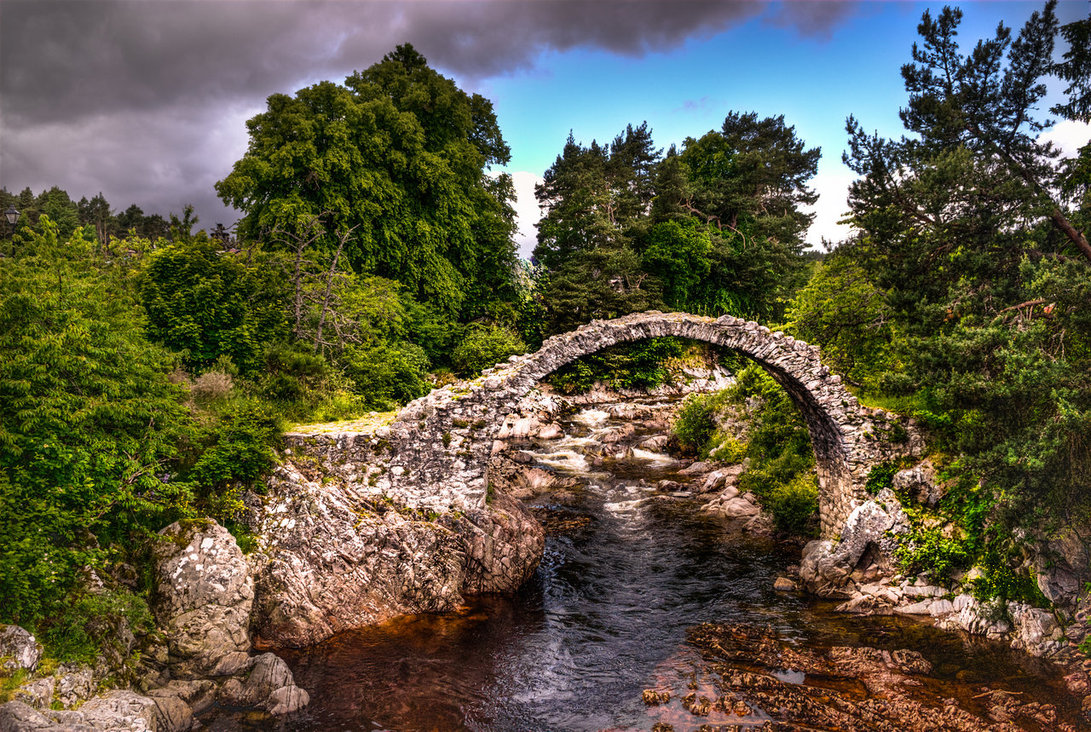 Although «cracking the origins-of-life puzzle»1, regardless of the reputation of the journalist who tells the news, is clearly not within the reach of science quite yet, the article published a few weeks ago by Sutherland and colleagues in the UK 2, does constitute an interesting launching ramp for current and future systemic approaches to this fundamental problem. About a year ago, in a previous entry in this blog, I tried to explain what the term ‘systemic’ means in a chemical and biological context, using the metaphor of a bridge. The construction of a bridge involves different types of material components linked together so as to maintain its structure and function; similarly, though orders of magnitude more complex and dynamic, a living organism requires the integration of diverse types of molecules into a robust whole, the cell. A remarkable peculiarity of cells, compared to bridges, is that they build themselves: they synthesize their own components (not all, but most of them) and they achieve stability and functionality in very different (far from equilibrium) conditions, through continuous change and transformation processes. This is why chemistry is so important for life, whereas a bridge is just a clever, physical assembly of material parts.

Anyhow, most chemists to date have followed the ‘one-thing-at-a-time’ simplifying strategy, which is very reasonable and efficient for many purposes (like physicists have also shown us over the years), but certainly not to get closer to the roots of biology. The actual workings of any living cell involve a tight functional integration among a wide diversity of molecular ingredients (proteins, lipids, sugars and nucleic acids, among others) and this fact holds a profound message about the problem of origins (a message that has been disregarded, or not correctly interpreted by science, until recent times): no matter the difficulties, it is wrong to conceive the appearance of those various complex molecules separately. Different schools within the field of origins of life have traditionally shown their preference for one of those types of molecules (primarily proteins or nucleic acids) over the others, and searched for prebiotically plausible ‘chemical shortcuts’ to obtain that particular type, without much consideration about the possible contribution(s) of the rest. One thing at a time: the question of integration would have to be solved later, once we get to the biomolecules, which is hard enough. However, this analytic way of thinking is probably misleading, guiding origins of life research to dead ends. In contrast, it is becoming increasingly apparent that proto-biological systems, even at their first stages, might well demand higher levels of molecular diversity and heterogeneity than classically presumed 34. This brings forward the problem of integration to a chemical scenario in which researchers have to play with various biopolymer precursors — rather than with the biopolymers themselves, which would be the outcome of the process of origins, the enabling conditions for a proper process of biological evolution to set off.

It was Sutherland’s group itself, a few years ago 5 whom actually discovered that an alternative ‘systemic’ approach could be applied successfully to the prebiotic synthesis of RNA building blocks. Instead of searching for chemical mechanisms to produce the main molecular subunits of a ribonucleotide (ribose, pyrimidine base and phosphate group) and then try to bind them together (which was strongly inefficient: linking ribose with the base, without specialized enzymes around to do the job, is a nightmare for any organic chemist), they managed to obtain precursors of those subunits, which would react through an alternative pathway, to eventually yield ribonucleotides. That clever strategy is now extended (Patel et al. 2015) to several building blocks of other fundamental biomolecules (aminoacids and lipids, essentially), with the remarkable discovery that all these precursors could form by means of a common chemistry, based on hydrogen cyanide (HCN) and a few of its derivatives, driven by ultraviolet light and catalyzed by copper compounds. 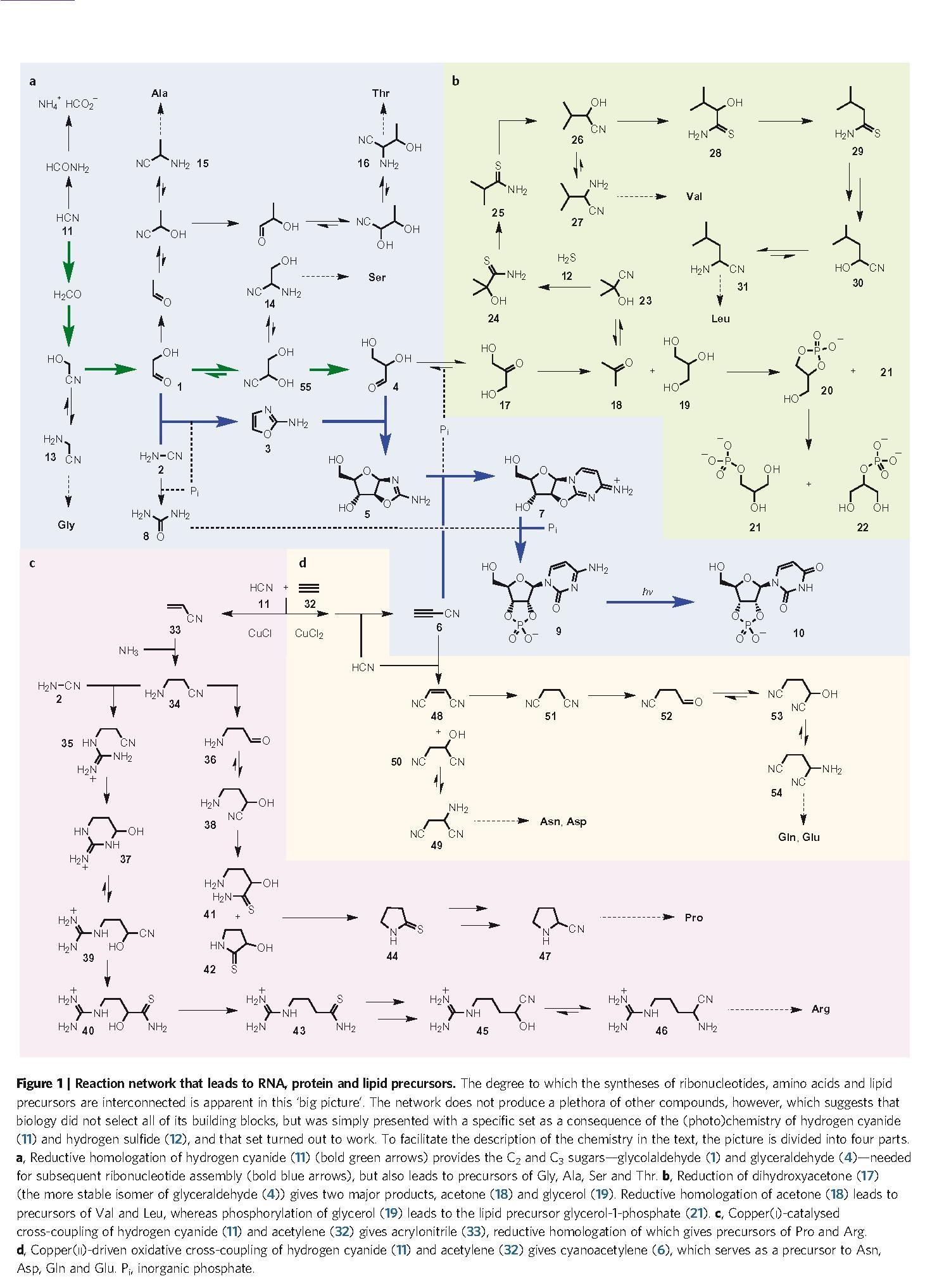 Just by itself, this finding is of great interest, because it confirms the wide prebiotic relevance of HCN (an ‘old friend’ of many origin-of-life researchers, with Joan Oró at the head of the list) and will therefore increase the attention and the number of experiments carried out in that line, hopefully extending even further the already prominent network reported here (Figure. 1). Thereby, it gives support to heterotrophic hypotheses for the initial chemistry of life, demonstrating that the use of a highly reactive species (like HCN) is probably more effective than trying directly with inorganic carbon sources (like CO2 or CO) and reducing agents. Furthermore, it also confirms that there is no hope for an ‘RNA world’ in the terms that it has been –and is still– typically studied (i.e., as a world of ‘naked ribozymes’): nucleic acids, whenever they get to stage, will be accompanied by a suite of other compounds — aminoacids and peptides, no doubt, but surely lipid compartments, too. Nevertheless, to make their proposal more compelling, Sutherland and his group introduce a significant novelty: they interpret the results of their organic syntheses in the context of an intricate but plausible geochemical scenario in which (Figure. 2): (i) some reaction steps could take place separately from others (i.e., under different conditions, to optimize their respective yields) and (ii) the primary synthesis of the main starting materials, HCN and H2S, is feasible (provided that meteorite bombardment is included in the picture, which gives this work a nice astrobiological flavor, as well). 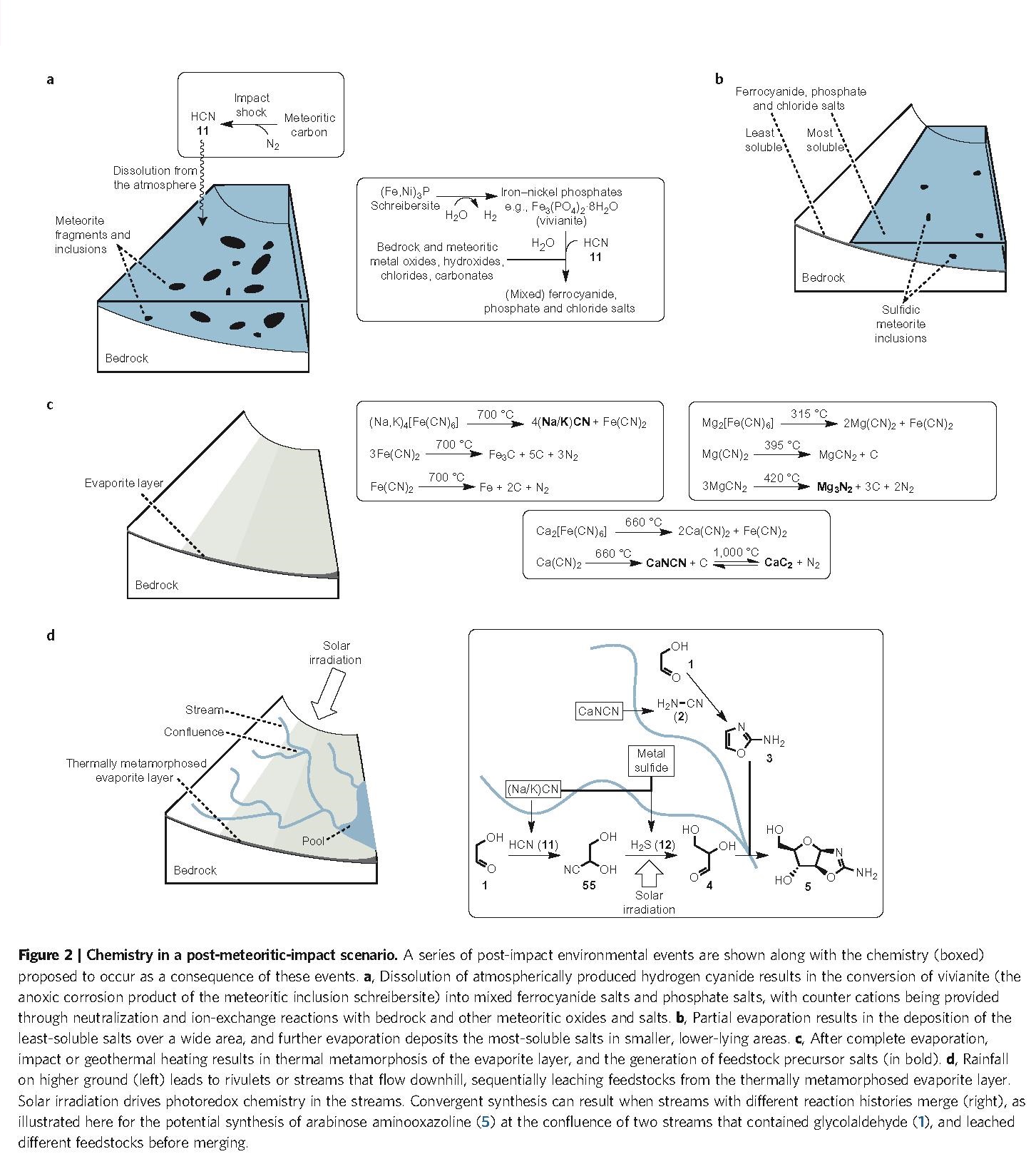 Origin-of-life proposals must be coherent with a geochemical environment compatible with our knowledge of the primitive Earth, and the effort that this group makes in that sense is exceptional, as my friend and colleague Carlos Briones highlights in a recent and really didactic blog entry in Spanish on the same subject. In addition, this type of setting, combining different reaction milieus where independent parts of the chemistry take place, but also allowing for the eventual mixture of the various products, seems very reasonable — apart from the only way of getting such impressive yields, of course. The authors of the article (Patel et al. 2015) explicitly address the advantages that this has in comparison to previous ‘one-pot’ scenarios (e.g.: Miller’s, for aminoacids, or Butlerow’s, for sugars), where origin-of-life researchers encounter, once and again, the same difficulties: incompatibility issues, the problem of side reactions, and so on. However, when you finish reading the paper, you are left with the feeling that everything is too ‘neat’, too ‘well-wrapped’. Is this a merit of the authors or a sign that some of those geological considerations are ad hoc assumptions to make their proficient work as organic chemists even more convincing? Difficult to answer but the effort is certainly there, and one should appreciate it. In fact, all key papers in the field of origins should be forced to make a similar geochemical contextualization of their results. In that way, perhaps in a not so distant future, by comparing the different proposals, the community will be able to tell something more concrete about the actual ‘cradle of life’, about the real conditions under which the game of life started.

In any case, it is also important to realize why this work, being a clear step forward, falls short with regard to other fundamental issues that we are faced up with in the field of origins. The first argument that I am going to give is that it remains at a very elementary level in terms of the structural complexity of the molecules produced. In that sense, it looks as if we were still carrying out, at the beginning of the 21st century, experiments of the Miller-type… though properly, of course (see, again, the comments in Carlos’ blog entry). Yet, there is a world –or perhaps several worlds– between aminoacids and proteins, between nucleotides and nucleic acids, between glycerol-1-phosphate and the phospholipids making up a biomembrane. In other words, the problem of origins of life is not simply a question of extending Fig. 1 to other biomolecule precursors, so that it looks still more encompassing. One of the key challenges is to scale up in the structural complexity of the molecules involved, from monomers to polymers. Not because life, as we know it on Earth, happens to be made of complex components; but because structure provides molecules with function — as long as these are embedded within an organization of other molecules, for sure. Actually, the amazing catalytic power and specificity of enzymes strongly depends on their macromolecular character. And the informational ‘recording’ of that enzymatic complexity requires components of a similar size (but with a ‘language’ of their own, for which other structures and functions need to be developed, etc.). In brief, being aware of the importance of discovering the primitive chemical pathways that made possible the synthesis of the whole building, we must acknowledge that we are still on ‘ground floor’.

This naturally brings us to the second argument, and challenge, which relates to how buildings (or bridges, by the same token) would be constructed, upwards, if they were of biological nature: namely, the problem of coupling synthesis with functional integration — which is probably the real heart of the matter (Ruiz-Mirazo et al. 2014). In this regard, the article by Sutherland’s group does not make any contribution, although they include the term ‘proto-metabolism’ in the title, and they do state in the conclusions, at the very end: «(…) we describe a scenario in which (…) components of all three subsystems are produced and then blended together. The reliance of the homologation chemistry on hydrogen cyanide and hydrogen sulfide prompts us to use the term ‘cyanosulfidic’ to describe this protometabolic systems chemistry» (Patel et al. 2015) — with a reference to de Duve (2005) 6, in order to justify their use of the term protometabolic there. But, precisely, the part that has to do with ‘metabolism’ or with that ‘blending together’ is what we are missing in their work. A possible starting point in this direction would be to identify autocatalytic species, or autocatalytic reaction loops in the network, and investigate where that leads to. Nothing on those lines is reported, though. A more demanding step would be that the components synthesized through that basic set of transformations get assembled into a distinguishable system (or set of systems), within which they may carry out different functions (e.g., spatial/kinetic control tasks, storage/hereditary tasks, etc.). Nothing on those lines, either. So we can say that the authors of the paper are more suggestive than constructive in that sense. Nevertheless, strictly speaking, they do not say more than what they do: the reference to de Duve is well chosen because he used that terminology (proto-metabolism) with the broad meaning of a pre-existing or underlying ‘dirty chemistry’, whatever its nature, on top of which enzymatic catalysts would operate, turning it into a ‘clean biochemistry’. But, let us be honest: that jump (from a heterogeneous and diverse ‘monomer world’, to a highly organized ‘multiple polymer world’) is definitely the hard one. Enzymes (or their functional precursors) do not fall from heaven: they must be synthesized –and integrated– within the system under construction itself.

So, fortunately, the journey to map our ignorance must continue.

For a general presentation of Patel et al (2015) please refer to The beginning of life, uncracked by cyanide? by Isabel Pérez Castro