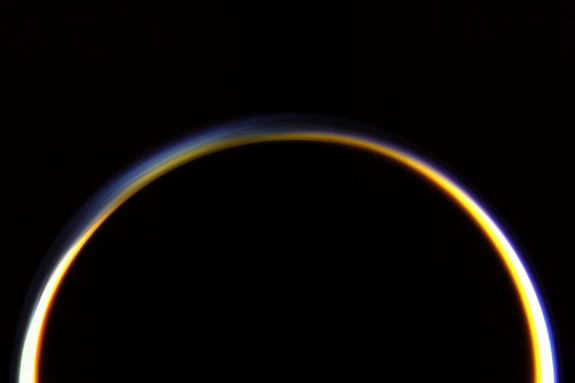 Titan, one of Saturn’s moons, has polar winds that take gases from its atmosphere and throw them into space, very much like Earth’s polar winds, according to data collected by the Cassini space probe, which has been studying Saturn and its moons since 2004.

The mass of a supermassive black hole at the center of the barred spiral galaxy NGC 1097 has been calculated by astronomers using the Atacama Large Millimeter Array. The black hole’s mass is 140 million times that of our sun.

At least a couple of species of deep-sea sharks appear to have some positive buoyancy. Scientists measured the depth, swimming speed and acceleration of five bluntnose sixgill sharks and a single prickly shark by attaching monitors to them. They noted that the sharks beat their tails more frequently when they descended, then glided up for minutes without beating their tails, an indication of positive buoyancy.

There’s a structure in a worm’s brain that helps it detect Earth’s magnetic field. The AFD neuron helps C. elegans sense temperature and carbon dioxide levels, and now research published in eLife suggests it detects magnetism. Researchers say animals that are more complex may also have similar structures in their brains.

Researchers are perfecting technology that creates a picture of a criminal’s face from a sample of DNA. Scientists extracted DNA from a volunteer’s saliva and produced a close approximation of the subject’s face using 20 genes.