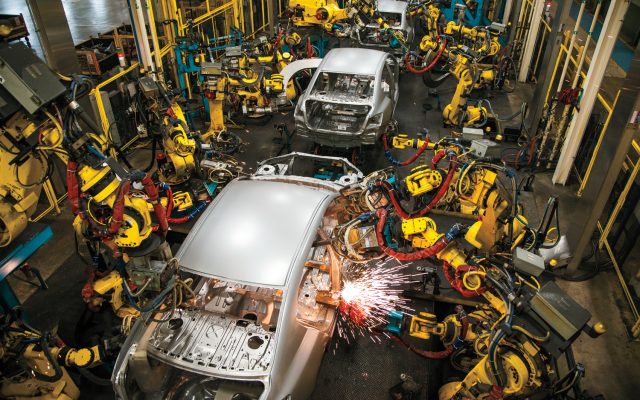 Organic small molecules are essential for many different fields, from medicine to technology: Most of the drugs we take, biological probes and the constituents of solar cells, to name but a few, are small organic molecules. (Figure 1)

However, their synthesis in the laboratory is not easy. Individual reaction conditions for each step of the synthesis (and several are required) have to be found, and the intermediate between each step has usually to be purified. This way of obtaining the molecules can be compared to craftwork, which comprises long time, expertise, and low yields. On the other hand, the assembly-line like production of molecules allows a more facile access to the compounds. However, until recently has only been available for peptides and oligonucleotides. Significantly, their automated synthesis has resulted in greater accessibility and therefore in widespread exploration and applications.

The automation of molecule synthesis requires a building block strategy with a common purification process between the steps. Recently, a team of chemists developed such a system for small molecules based on the homologation of a boronic ester1. Despite its importance, the building block was invariably the same, and thus, the scope of compounds that could be made, limited. Now, a group of researchers by allowing the use of different building blocks, have laid down the first brick for a truly automated process for organic small molecules2.

As it can be noticed from figure 1, small organic molecules can be very different from each other, which undoubtedly complicates their synthesis through a common procedure. This holds true in the laboratory because in nature these type of compounds (such as 1 to 4) are biosynthesized by the iterative assembly of a limited set of building blocks. Molecules 12 to 14 also follow similar synthesis, but their final shape is due to a terminal (poly)cyclization. What researchers aimed is, once again, to mimic nature.

For that they started choosing N-methylimonodiacetic acid (MIDA) boronates as building blocks, which allows iterative cycles of coupling and deprotection. (Figure 2) The final characteristics of the molecule such as functional groups and the stereochemistry are preinstalled into the building blocks. This makes the procedure easy, especially due to the commercial availability of them or their immediate precursors.

The methodology would be as follows: first, the target molecule would be “disassembled” on the paper into smaller fragments. (Figure 3, up) This technique, called retrosynthesis, is followed by the synthesis in the lab, in which the reverse order is applied. (Figure 3, down) With the synthesis of secodaphnane alkaloid core, the authors wanted to proof that their coupling methodology was viable before heading to the next crucial step, the purification.

Purification of intermediates is one of the most tedious steps (and in the industry, expensive) of organic synthesis. Again, the great diversity of structure and function on the different molecules makes the purification dependent on the substrate and thus has to be adapted individually. Nevertheless, an automatic procedure requires an efficient and general purification method to deserve that name. The authors of the paper noticed that the MIDA boronate, which is generated in each step, shows an unusual binary affinity for silica gel depending on the solvent: MIDA boronates are retained when a methanol:ether mixture is used while they are rapidly eluted with tetrahydrofuran. Importantly, this behavior was inherent to the MIDA boronate, despite the attached fragments. They profited from this performance to develop a catch and release purification protocol applicable to any intermediate containing an MIDA boronate. They would pass the crude reaction mixture over silica gel and wash the excess reagents and by-products with the methanol:ether mixture. Afterwards, washing with tetrahydrofuran would release the MIDA boronate.

Having in hands both the common building block and purification methodology they went on to build a synthesizer that operated in a fully automated way. (Figure 4) It comprises three modules, namely, deprotection, coupling, and purification, which are run in each step of the synthesis.

In summary, this new method can be considered as the first step towards the automatic synthesis of small organic molecules. This would represent a great improvement compared which the common procedure, which involves individual conditions for every step (reaction and purification) Consequently, if assembly-line synthesis of organic molecules was standardized useful molecules could be more effectively synthesized, and more importantly, analogues easier produced. This would definitely help to overcome the current bottleneck in the synthesis of complex molecules and, in turn, ease the investigation on their practical potential.

How water molecules penetrate salt crystals, seen one at a time.