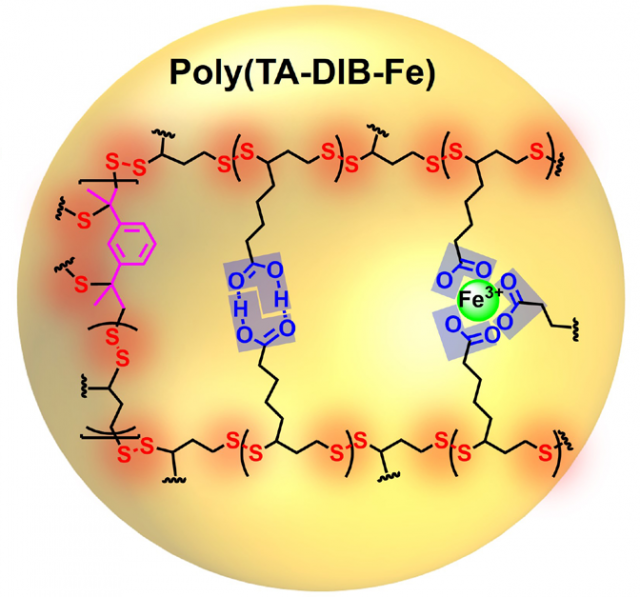 Turning simple, individual molecules into complex, interconnected materials is the core of polymer chemistry. There is currently an increasing demand for materials with sophisticated properties such as self-healing and reusable adhesivity. However, achieving polymers with such functionalities generally demands higher structural complexity, synthetic difficulty, and cost. Now, a team of chemists has designed a supramolecular polymer with self-healing ability, reusable adhesivity, ultrahigh stretchability, and processability from a simple molecule, thioctic acid1. By combining this small molecule, which moreover is of biological origin, with two other commercially available components, they could form a supramolecular network with the aforementioned properties. Remarkably, the preparation is easy, requires only one step and avoids the need for solvents.

Thioctic acid (TA), also known as lipoic acid, is a naturally existing molecule in animals, where acts as a cofactor of many enzyme complexes for the aerobic metabolism. It has two functional groups, namely a disulfide and a carboxyl group (Figure 1A). At the melting temperature of TA (70 °C), the five-membered ring, which has the disulfide, undergoes ring-opening polymerization to form the linear backbone of the polymer. The fluidic liquid turns into a transparent solid after cooling, when carboxylic side chains cross-link the linear poly(TA). However, after a few minutes of letting it stand the reverse reaction, the ring-closing depolymerization, start to take place, initiated by the terminal diradicals.

The researchers used 1,3-diisopropenylbenzene (DIB) to quench these terminal radicals, covalently linking the network. Moreover, iron(III) ions were introduced by addition of FeCl3 (Figure 1A/B). The ions replaced some of the hydrogen bonds formed by the dimerized carboxylic side chains and contributed to the stability due to their stronger complexation. They found that increasing concentrations of iron(III) led to a higher mechanical strength of the poly(TA-DIB-Fe).

The mechanical properties of this new material are highly interesting. It did not break when pressing and could not be easily cut by a knife (Figure 2, left). Furthermore, the polymer showed an outstanding stretchability: it was stretched 150 times its original length without breaking! The authors attribute the high mechanical strength and the remarkable stretchability to the mechanism of the polymer formation (Figure 2, right). They argue that the existence of three different dynamic chemical bonds, namely, covalent disulfide bonds, hydrogen bonds and iron(III)-carboxylate coordinative bonds makes the polymer network to stretch by hierarchical energy dissipation mechanism. Besides, the numerous high-density cross-linking sites result in highly folded polymer chains which allow easier chain sliding.

Apart from conferring excellent mechanical properties, the presence of three types of dynamic chemical bonds enabled the poly(TA-DIB-Fe) to have self-healing capacity. A scratch on the polymer was healed after 6 hours at room temperature (Figure 3), which is a fast healing considering that no external stimuli were applied.

Self-healing processes are usually inhibited by ageing due to the reduced number of unbound or “sticky” bonds, which are key in the self-healing process. In this case too, poly(TA-DIB-Fe) aged for 24 hours showed slower healing rates (40 vs 6 hours of the fresh polymer). According to the authors, the healing starts with the non-covalent exchange by the hydrogen bonds and iron(III)-carboxylate coordinative bonds, forming a weak interface in both fresh cut and aged samples (Figure 4). However, the formation of a stronger interface by covalent exchange of disulfide bonds is faster in fresh-cut polymers whereas it needs an additional breaking and remaking of the disulfide bonds in the aged polymer (Figure 4).

A large number of carboxyl groups in poly(TA-DIB-Fe) means that this material could act as surface adhesive material. The researchers explored this property of their new polymer by first melting the poly(TA-DIB-Fe), placing it on a glass slice and then hot-pressing it with another slice of glass (Figure 5). Cooling down to room temperature enabled the network within the polymer to reform again, this time linking it to the glass surface. A glued area of 4cm2 could hold a weight of 5kg. Compared with commercial glues (3M instant adhesive and 3M double-sided tape) the poly(TA-DIB-Fe) showed enhanced adhesive force on nine different surfaces. Remarkably, the polymer showed excellent adhesiveness to hydrophobic Teflon. The authors reasoned that the observed adhesiveness could be attributed to the hydrogen bonds between the carboxylic groups of the polymer and the hydroxyl groups of hydrophilic surfaces (such as glass) or the fluorine groups of hydrophobic surfaces (Teflon). This hypothesis was confirmed by studying the adhesive force at different temperatures. They measured that the adhesive force decreased with increasing temperatures, due to the dissociation of heat-labile hydrogen bonds. At 60°C, the glass slices separated but, interestingly, they could adhere again by the same method described above (Figure 5). This process could be repeated up to 30 times and the polymer showed no fatigue, proving its reusability.

In summary, a new supramolecular polymer with moldability, adhesivity, stretchability, and self-healing capacity has been developed starting just from three simple components and with an easy preparation method. The authors envision its possible application in the fabrication of adhesives, self-healing materials, and wearable and biodegradable devices.