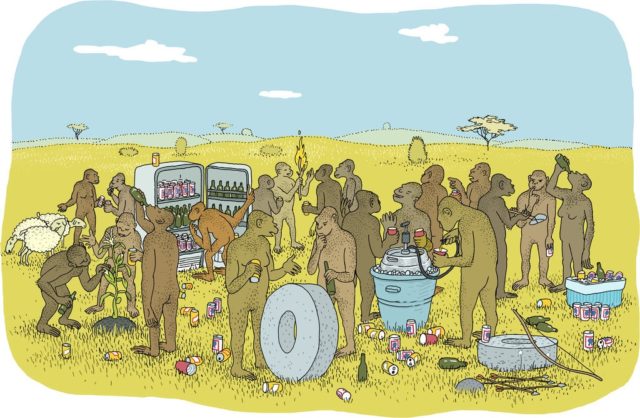 You have probably heard before about the origin of the word salary. Indeed, it comes from the allowance that Roman soldiers received to purchase salt. The trace left on the language tells about the importance it had. There is no doubt about the key role salt had for the preservation of food. Analogously, words derived from bread tell us about the central role it played on the diet in the past. Expressions such as “bread-winner” to name the member responsible for financially supporting the family and “dough” as a synonym of money show that the primordial use of the income was to provide bread for the family. The importance of bread lies not only in having been the staple food for centuries, but it is generally believed that the domestication of cereals to make it was the main driving force behind the agricultural (Neolithic) revolution. At least this is how has traditionally been understood. But the same ingredients that are used for making bread can lead to another product, beer. Since the 1950s some researchers have claimed that we humans settled and domesticated wild grains to produce not bread, but beer.1,2,3

Wild barley and wheat were domesticated around 8000 B.C. and the onset of the civilization in Mesopotamia is intimately linked to beer brewing; a Sumerian poem written in the 3rd millennium B.C. has the oldest recipe known, and it is for beer. Before the Roman times where the salary was linked to salt, the workers in Uruk (Sumerian city, today’s Irak) were paid in beer. Centuries later, this was the case too for those who built the pyramids. At that stage, beer was so important that there were already “professional” breweries. The history from that point on is better known thanks to the remaining written documents. The question remains to what happened before 8000 B.C.

The Natufian culture were hunter-gatherers that populated the Levant (today’s Syria, Jordan, and Israel) between 13000 and 9000 B.C. Contrary to other hunter-gatherers the Natufians were (semi) sedentary. Therefore, they are believed to be the transition from a nomadic to a sedentary way of living, and consequently, are linked to the beginning of agriculture. The Natufians, apart from hunting, harvested wild cereals. Furthermore, recent archeological findings suggest that they were brewing proto-beer.3,4

Before they arrived to that point, they had probably started collecting wild grains. Most likely, the first use of grains as an edible source was as popped of parched, due to its easiness: it just requires applying a source of heat. Just think of popcorn. In fact, it seems that this was the first use of corn. By adding water to the first two elements -grains and heat- the result is gruel, a thinner version of porridge. There is a consensus that gruel preceded both bread and beer, again, due to its ease of preparation. The equation gets significantly more complex when a fourth element, the yeast, is added to the mixture. DNA analysis of modern strains shows that the domestication of S. cerevisiae took place approximately 11,000 years ago, even before the time when barley and wheat were domesticated (8000 B.C.) Interestingly, S. cerevisiae is used in making bread as well as beer. In both cases, the yeast turns sugars into carbon dioxide and ethanol, but the process is different, and so is the outcome.

The making of a loaf starts where gruel stopped, in a mixture of grain (ground, in the form of flour) and water. The yeast transforms the fermentable sugars in the dough into alcohol and carbon dioxide, and their release makes the dough rise. Then the dough is heated in an oven to yield the loaf. The process and components for making beer are similar, but here the order of the factors alters the product. The main difference is the conversion of the cereal starches into sugar, which in turn can be converted into alcohol by the yeast. Brewing begins with malting, which consists in letting the grains germinate by soaking them. Certain grains produce some enzymes that can transform the starch into sugars. The germinated grains are then dried (originally by the sun) and at this point, it is easier to grind the cereal. If this ground malt is added to a mixture of cereal and water the enzymes will convert the starch from the cereals into sugar. And here there is a link with the previous stage because if the ground malt is added to a gruel/porridge, the conversion to alcohol is higher because the heat helps to hydrolyze the starches in the grains. The yeast can now start fermenting the sugars (maltose) into alcohol, as long as anaerobic (no oxygen) as well as acidic conditions are met. The first can be obtained by closing the vessel, and the second by the latic-acid bacteria naturally occurring in the air. And here there is one more link with bread. Originally, the bread was made from sourdough, whose name precisely derives from the taste given by the lactic acid bacteria. Based only on the processes of making beer and bread, due to their overlaps, it is difficult to assess which technique could have preceded the other. But several facts suggest that beer might have been the drive behind the domestication of wild grains.

Beer would have been a safer way of drinking water in a time when disinfection and water treatment were unknown concepts. The growth of yeast and lactic acid bacteria would prevent other potentially harmful microorganisms from growing.

From a nutritional point of view, grains are not the best source of nutrients that would justify a change from hunting-gathering to cultivation. Both wheat and barley are low in the amino acid lysine, an essential amino acid that humans cannot synthesize and therefore needs to come from the diet. Further, these cereals do not contain enough B vitamins. Moreover, cereals (especially wheat) also contain antinutrients (phytates) that prevent the absorption of some essential minerals. Interestingly, through the process of sprouting and fermenting (part of the brewing process) the grains, the mentioned problems are mitigated. Having said so, the life expectancy during the Paleolithic, the hunter-gatherer’s time, was higher than in the subsequent 10000 years. What did then move people to settle and start farming? There is further evidence that even after the domestication of wild cereals only a little part of the diet came from grains. Compiled together, these pieces of evidence suggest that the domestication of grains was not pursued for nutritional reasons.

Moreover, brewing beer (as well as baking bread) is a time and resource-consuming process which requires a good reason. Traditionally, brewing beer was almost exclusively associated with special occasions: mortuary rituals, ceremonies, communal events, and feast. The most remarkable aspect of a fermented beverage is the presence of variable levels of alcohol. Despite the rudimentary techniques, such processes would yield proto-beers with a low but still noticeable amount of alcohol. The psychoactive effect of it would have been highly appreciated in those situations to enhance the connection within the community and with the afterlife. According to some researchers, the fermented beverages in these feasts would have been highly valued and the increasing demand to support them would have been the drive to domesticate and to cultivate grains.

As with events that happened before written records we will probably never know how the events unfolded. However, latest research shows that beer played a key role in the dawn of the civilization. And as for the question if that was the reason why we as humans became sedentary, Katz´s and Voigt´s concluding sentence2 seems a good concluding reflection. “Finally, we leave each reader with one last test of any hypothesis, its plausibility. Given a choice of gruel, bread, or brew, which would you rather have with your next meal?

2Katz, Solomon H. and Voigt, Mary M. “Bread and Beer. The Early Use of Cereals in the Human Diet” Expedition, 1986, 28, 23-35. Available from https://www.penn.museum/documents/publications/expedition/PDFs/28-2/Bread.pdf

A plant biologist inside a bakery