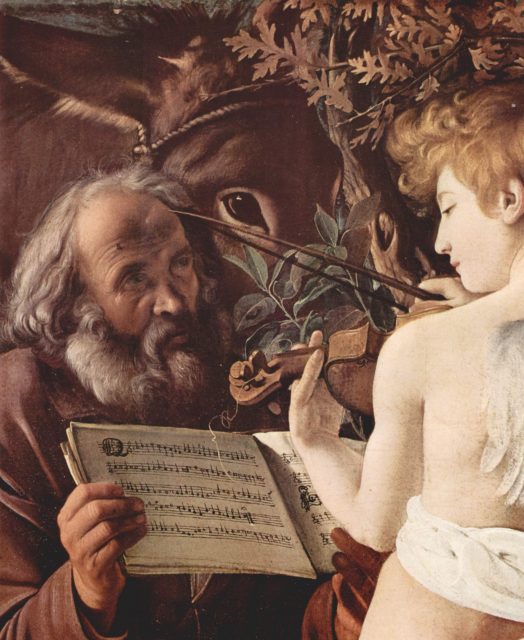 An «earworm» is a tune that arises seemingly spontaneously in the mind and becomes “stuck” in the head for hours or days. It is also called brainworm, musical imagery repetition, involuntary musical imagery, and stuck song syndrome. Sometimes we feel that it is driving us insane hampering a straight thinking and complicating concentration although usually it disappears as unconsciously as it had come.

Most earworms are excerpts of familiar and recently experienced songs and they tend to be melodically and rhythmically simple. In most cases, they are just a fragment of the composition (usually 15 to 30 seconds) and not the entire song from beginning to end. Songs with lyrics may account for 73.7% of earworms whereas instrumental music may cause only 7.7%.

Women and men experience the phenomenon equally often, but earworms tend to last longer for women and irritate them more. Some persons are more susceptible to earworms than others, including musicians and people with obsessive–compulsive disorder but nearly all of us (about 98%) have had a song stuck in our heads at some point. In questionnaire studies, most of the people queried reported to have experienced earworms, that it was not an unpleasant experience and in some cases, it was even actively welcomed. However, involuntary musical memories are considered as the most intrusive of common unwanted cognitions and they are interesting because they may be a form of involuntary musical memory analogous with involuntary autobiographical or semantic memories that, in a few persons, may affect the quality of life.

It is considered that in an earworm the neural circuits get stuck in a repeating loop and they play this thing over and over again against the desires of the unfortunate “owner”. This person may have particular characteristics: test evaluating mental control, reported earworms of shorter duration in patients with higher numbers on this subject than those who scored less highly on this inventory. Present conditions may also affect the presence and evolution of earworms since, in fact, they are triggered not just by hearing a song, but also by memory, mood, stress, and even boredom.

Earworms have also a footprint in the history of literature (1). The earliest mention of the phenomenon has been located in Edgar Allan Poe’s tale The imp of the perverse (1845) where he wrote:

It is quite a common thing to be thus annoyed with the ringing in our ears, or rather in our memories, of the burthen of some ordinary song, or some unimpressive snatches from an opera. Nor will we be the less tormented if the song in itself be good, or the opera air meritorious.

Mark Twain also commented on the earworms and his 1876 story “A Literary Nightmare” (also known as “Punch, Brothers, Punch”) is about a jingle that one can get rid of only by transferring it to another person. It has also appeared on a science-fiction story by Arthur C. Clarke, in an episode of Seinfeld and even SpongeBob SquarePants had an earworm although in this case it was a physical creature that enters one’s head upon listening to a catchy song

A particularly interesting question about these nauseating repetitions is how to get rid of them. It is part of a wider perspective: how mental control is achieved, how unwanted images and memories can be suppressed and what are the mechanisms involved in excluding some ideas and recollections from consciousness. As far as science can say, no verified cure for earworms exists. That doesn’t mean, however, that there are not successful strategies to eliminate them and get your concentration back 1.

The first strategy is to identify the enemy. Usually, we have just a short melody or chorus lines playing again and again in our brain and we focus more on it if we cannot give it a name. For some people, in order to get rid of it the best solution is to listen to that song from start to finish but you need to identify what song it is. To do this, you can ask to a friend or use digital tools like Shazam or Soundhound. Then, you can either rest now or try to find the whole music composition on YouTube and listen to it.

A second strategy is to load the auditory system to get rid of the unwanted auditory imagery. This can be done using sensory specific stimuli, such as counting, whistling another melody or doing subvocalizations.

A third method is trying to replace the earworm with another song. In this world full of digital offers, there are apps like Earworum and Unhearit that do precisely that: rehearse a catchy and popular song – the typical characteristics of earworms – that do the trick.

A fourth method is singing very slowly a well-known song. In the Anglo-Saxon world, they recommend God save the Queen but it is not an appropriate option for other populations.

The fifth and probably most widely used method is to distract yourself away from that obnoxious composition. For some people, the only needed thing is to desire it, i.e. just think about something else. For others, not so strong-willed, it takes a help. One example is to keep a rubber band on your wrist slapping yourself. It probably recruits new sensory components, a light pain…but other options are to check your twitter account, go for a walk, play chess on the internet, … anything that gets the brain off the earworm in your mind.

The sixth strategy, in cases where the quality of life is affected, is obsessive-compulsive disorder medication. It has been shown that these drugs are able to minimize the effects.

The last and most recent proposal hitherto is to chew a gum 2. This will load articulatory motor programmes and do the job. Beaman and his colleagues from the University of Reading (United Kingdom) showed that interfering the earworm by chewing gum reduces both the number of voluntary and the number of undesired involuntary musical thoughts. It is in agreement with previous results showing that chewing gum affects voluntary processes such as recollections from verbal memory, the interpretation of ambiguous auditory images, and the scanning of familiar melodies. They also demonstrated that chewing the gum interferes the experience of «hearing» the song and cannot be interpreted to a general activity on thinking about a music only in abstract terms. Third, they confirmed that the reduction of earworms by chewing gum was not the consequence of a general attentional or dual-task demand.

Eliminating a horrible song from your head is not an exact science. Each of us has to find which method works best. A possible risk is that an earworm might “rebound” in some way once attempts to suppress it have ceased, a nightmare even it is not a real creature entering in your head.

Mapping areas involved in voluntary forgetting is not simple… it is double!