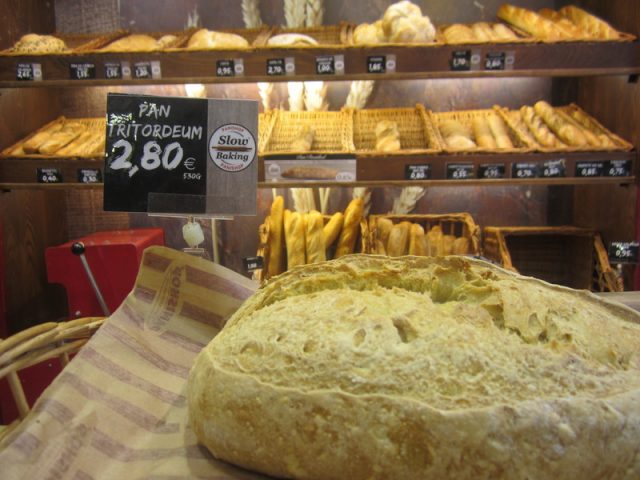 In recent years, when I enter into a bakery my decision of which bread to buy is getting more and more complicated because of the high variety of bread available. Bread is “in appearance” a simple product just made out of flour, yeast and water mixed together and baked. Of course, the complexity of bread goes far beyond the baker’s imagination to give shape to bread (Bread Race Car) and is mostly dependent on the flour used, which is obtained out of grinding cereal grains, mostly baking wheat (Triticum aestivum). However, the recent “ecologic, organic, biologic, ecoalternative” trend has multiplied the variety products in groceries, supermarkets and of course bakeries for the pleasure of bread lovers. Thus, it is now common to find bread made out of different cereals such as rye, maize, oat or rice and out of non-cereals like soybean. In this article, I will try to shed light in some points regarding bread-making cereals mainly in relation to wheat.

Domestication of modern bread wheat (Trititum aestivum) from wild grasses occurred in the Fertile Crescent (around 10,000 years ago) and fuelled the development of Indo-European culture. As for other agriculture crops, a selection was done regarding grain size and the easiness for its culture. Modern wheat comes from the hybridization of five grass species (Triticum monococcum, Triticum urartu, Aegilops speltoides, Aegilops sharonensis and Aegilops tauschii), and genetically represents three entire genomes (known as A, B and D) which make wheat genome one of the most complex crop genomes. It is hexaploid (six copies of each chromosome) and 6-fold larger than the human genome and 125-fold larger than that of the model plant Arabidopsis thaliana. Due to this complexity it is not still completely sequenced (more than 60%) but huge efforts have been done and many molecular tools to support breeding have been developed1.

Apart from T. aestivum there exist other several Triticum species that are believed to be the closest living relatives of modern wheat (Figure 1). These species are known as “ancestral wheat species” and among them we can found the famous spelt (Triticum spelta or Triticum aestivum ssp. spelta) which allows the production of tasty bread. Spelt is also hexaploid wheat coming from domesticated wild grasses but has remained invariable for a longer period of time. Indeed, in ancient Europe it was one of the main human foods and animal feed sources. However, it was progressively replaced by common wheat due to the higher yield of the last one and because spelt undergoes a costly dehulling procedure before being introduced in the mill, what makes spelt flour much more expensive. However, as you might have noticed in your bakery, and as stated above, in recent years with the increased interest of alternative products with increased nutritional values, spelt has been gaining interest due to its higher oleic acid and essential microelements content.

Similarly, if your daily bakery is trendy enough, you might have found bread made out of Tritordeum. Tritordeum is the first new cereal of new creation that has been launched for human consumption. It is the second new cereal ever after Triticale. Triticale (X Triticosecale Wittmack), created in 1870, adopted its name out of the fusion of its parent names: wheat (Triticum) and rye (Secale). The aim of this cross was to combine the energetic value of wheat with the agronomic robustness of rye giving rise to this new fertile cereal. It started to be cultivated around 1970 but it is still being improved through classical breeding techniques. Triticale is nearly exclusively used for animal feeding since its bread making quality is not very good; however, it is possible to find some varieties of bread which are made out of a combination of different flours including Triticale, which provides the bread with a higher content of lysine. In contrast, Tritordeum which was developed in the Institute of Sustainable Agriculture of Córdoba (CSIC) by the group of Dr. Antonio Martin in the late 1970s2

resulted from an interspecific cross between wheat (Triticum turgidum or Triticum aestivum) and the diploid South American wild barley (Hordeum chilense) and has similar bread-making quality as wheat. The benefits of Tritordeum are related to its high levels of protein, fibre and notably to its high content of lutein, an antioxidant which protects the eyes retina. Besides, Tritordeum appears to be more resistant to drought and other environmental constraints.

An essential component of nearly every cereal flour is the gluten. Wheat grains, as every seed, have storage proteins that constitute an essential source of energy for the seed to be able to germinate. About 75% of wheat grain storage proteins are glutenins are gliadins, which both form the gluten. Gluten is responsible for the unique viscoelastic properties of wheat dough, which allow the entrapment of CO2 during fermentation. However, it is also responsible for the gluten-related pathologies such as the celiac disease which is the permanent intolerance to gluten. Celiacs may suffer from inflammatory reactions and high risk of lymphoma, among others and the only way for celiacs to avoid these problems is a lifelong gluten-free diet which often represents a headache due to the great importance of wheat and other cereals, such as rye or barley, in the human diet. Gluten-free bread is basically bread made from other cereals like maize or rice, which as you might have experienced as a customer have a good flavour and but are not as tasty as a baguette for making a sandwich. Interestingly, a Spanish research group, led by the Dr. Francisco Barro also from the Institute of Sustainable Agriculture of Córdoba (CSIC), recently developed a genetically modified wheat with reduced gliadins content, by the use of RNA silencing techniques, which displays low toxicity for celiac patients, and other gluten-related pathologies while still having good bread making quality and organoleptic properties 3. Of course, bread made of this wheat is not in the market due to the European restrictions upon transgenic crops cultures but it could be available in the future. Bread exclusively made out of maize or soybean flour, which do not have gluten, are also available in the market but are less fluffy or more compact and that´s why maize or soybean flour is mixed with wheat flour, and thus not suitable for celiacs.

So, now when going to the bakery and being overwhelmed but the increasing bread types available, you will hopefully have a little bit of extra-scientific information to help you in your choice.

A brain inside a chip