The biological world is composed of dense, communicating, and difficult to understand ensembles. Animals living in groups –a school of fish, a flock of birds– have evolved to act in concert, a quality needed for coordinated movement. More complex than just moving together, group carrying is fairly rare in nature and only social spiders, dung beetles, baby rats, humans and ants do it 1. These animals organize among themselves to collectively carry loads far heavier than an individual member of their species can. Ants have an astonishing ability to mix collective muscle with individual initiative for heavy lifting. To lug a large object, a number of ants surround it – the back ones lift, those on the leading edge pull– and they find a balance between synchronized action, or conformity, on the one hand, and the flexibility needed to adapt, on the other. This is a difficult challenge for all individuals carrying big loads as a team. 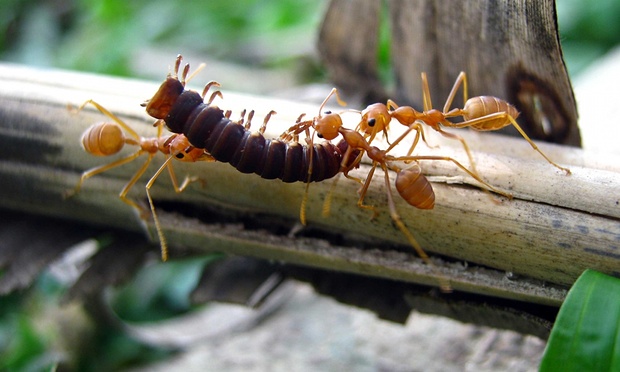 Paratrechina longicornis, the longhorn crazy ant, is an invasive species with worldwide distribution that occupies a diversity of habitats from urban to rainforest. These ants have a seasonal preference for proteins, and insects compose a main part of their diet during the summer months. Since these preys are often much larger than the size of the small worker ants (2.5–3 mm), impressive displays of P. longicornis cooperative transport of heavy loads towards the nest can be observed during this time of the year. One main aspect of this coordination is the requirement to align forces such that inefficient tug-of-wars are avoided. A downside of behavioral conformism is that it may decrease the group’s responsiveness to external cues, increasing the stability of maladaptative behaviors. Thus, the ants can move bigger pieces of meal as a team, but then an individual cannot react as quickly to danger, such an approaching predator. This tradeoff might explain why this carrier team building is rare in nature.

The group of Ofer Feinerman, at the Weizmann Institute of Science in Israel, filmed groups of crazy ants zigging and zagging as they carried different-size loads (including Cheerios) nearly 100 times, tracking individual and collective motions 2. They used video analysis to track the individual movements of the different ants in the group and they also added obstacles to the ants’ path to test how well the group could navigate. Although the bit of food always travelled in the general direction of the nest, its path was much more complex, one of wrong turns and corrections. The researchers found that the ants rotate jobs, alternating between carrying the load and “scouting out” the scene. The individual ants can be seen to help in carrying for a short while, after which new ants take their places. When these new ants mobilize, the other carriers, which have since become a bit confused as to the proper direction, defer to the newcomers. The ants seem to have just the right amount of erratic individualism. About 90% of the time, they will “go with the flow” and pull in the same direction as everybody else; the other 10% of the time they live up to their name. 3

As a new ant attaches, the steering of the object temporarily corrects, so that the trajectory becomes better aimed toward the nest. Newly attached ants continue to lead the motion for about 10-20 seconds. Thus, informed ants take the lead, but they are also quick to relinquish it once their informational edge disappears. Thus, the individuals gather new information and come with the best solution; the group gives it the muscle power and accept the know-where of the newcomer. Some ants provide the brains, other the brawn 4. The result is a useful compromise much better that each member acting independently and being able, thanks to the successive leaders, to correct for obstacles or wrong turns and arrive in the desired target. 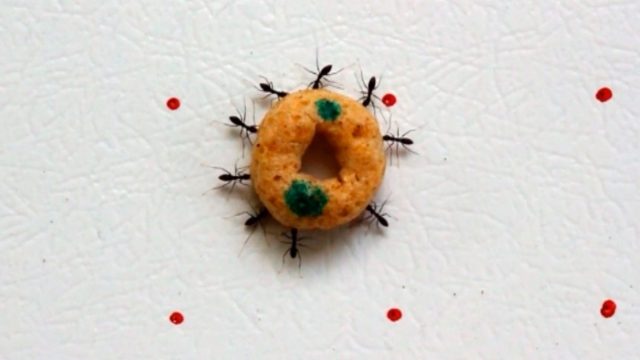 Then, while the combined force of the group determines the speed of the load, it is individual informed ants that steer the direction of movement. The system works at the transition between random walk and ballistic motion where the collective response to the steering of a single informed ant is maximized. The more ants around the item, the faster they could move it but as the group grew, the ants became less independent. Then, there is an optimal size. When groups are very small, just a couple of ants, each ants fights for a different direction and they don’t go anywhere. But if the group is too numerous, the coordination is almost impossible and the ants cannot navigate around obstacles.

This model describes a critical point between conformism and individuality that enables the group of ants to coordinate their work and adjust their direction as needed. The model is a variation on a so-called Ising model, which is more often used to describe emergent phenomena in statistical physics 5.