Slime mold is an informal name given to several kinds of unrelated eukaryotic organisms that can live freely as single cells but when food is in short supply, many of these unicellular organisms will congregate to form multicellular structures that move together as a single body. Thus, the aggregation and joint movement require the coordination of many individuals to accomplish a higher-level task. Although a certain specialization can be found in the slime mold: some cells will form a fructiferous body whereas others do not, there is no, to our knowledge, a central, leading unit.

The most sophisticated example of aggregation and movement coordination can be observed in social insects that are able to form larger and more complex self-assemblages of multicellular individuals. Some of the most astonishing aggregations are the floating rafts created by the fire ant Solenopsis invicta, the living chains formed by weaver ants of the genus Oecophylla and the bivouac (temporary shelters) and the bridges built by the Eciton ants. 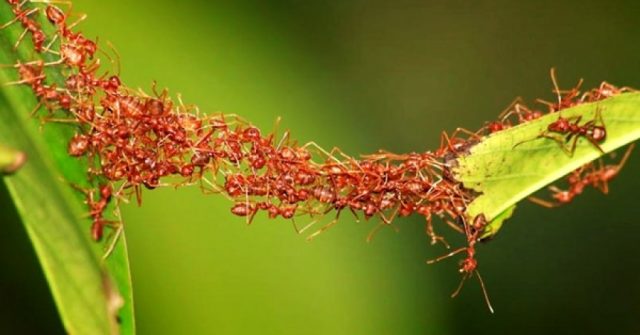 Ecitons are army ants or marabunta and they do not construct permanent nests but move long distances over the time. They are nomadic social predators that hunt primarily other ants and some other arthropods throughout Central and South America. Eciton burchellii and Eciton hamatum are the most visible and best-known species of the army ants because they forage above ground and during the day in enormous raiding swarms. Charlton Heston and Eleanor Parker, starring in The naked jungle, know what we are speaking about.

Army ants have a biphasic lifestyle alternating a nomadic phase and a statuary phase. In the latter, which lasts about three weeks, the ants remain in the same location every night and they arrange their own living bodies into a nest, protecting the queen and the eggs in the middle forming a bivouac. In the nomadic phase, the ants move their entire colony to a new location every night for about two weeks on end, in an unceasing advance. The columns of workers penetrate the forest, frantically gathering as much food as they can. Raids have a deep impact on prey populations and the army ants avoid local resources depletion by conducting those successive colony emigrations to new, potentially prey-rich zones.

Foraging behavior is based on high levels of traffic, but the leaf litter where they live is very irregular with many holes, uneven surfaces, and obstacles that can slow the movement of columns. If a break or gap disrupts the most direct path from the bivouac to their spoils, individuals instinctively stretch across the opening, clinging to one another as their comrades-in-arms swarm across the bodies. They simply build a new path, more direct, out of themselves.

A group of entomologists from Princeton University, New Jersey Institute of Technology, Harvard University and the University of Konstanz in Germany studied how army ants adjust «living» bridges to a cost-benefit trade-off. Their focal species was Eciton hamatum (Fabricius), and all data were collected from Barro Colorado Island, Panama. The article was published in the journal Proceedings of the National Academy of Sciences 1. 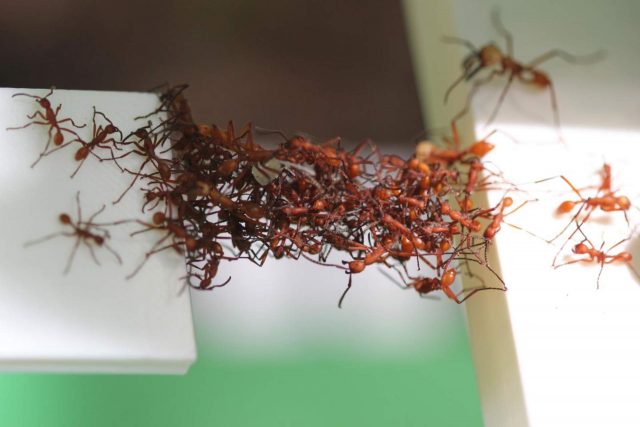 The researchers report for the first time that the «living» bridges of the species Eciton hamatum are more sophisticated than previously thought. The army ants use these bridges as the terrain demands, such that long stretches of dozens of meters over relatively smooth terrain (e.g., large logs and fallen branches) may contain no bridges, whereas forest patches of particularly rough and broken terrain may contain several bridges per meter of trail. They form the bridges without any oversight from a «leader» ant and perform a collective estimation considering the cost-benefit of their operation, evaluating the advantage of increasing foraging trail efficiency balanced by the cost of removing workers from the foraging pool to form the multi-animal structure. Large suspended bridges do not form in place, but typically start at the bend of a natural diversion (e.g., the angle of crossed branches that deviate from a straight path), using very few ants, and subsequently build out into the gap, creating a shortcut in the foraging trail with a high number of animals forming the bridge. The ants continuously modify their bridges, such that these structures lengthen, widen, and change position in response to traffic levels and environmental geometry. The most likely mechanism by which they adjust to their environment is through individuals modifying their likelihood to join or leave a structure based on interaction rates, both with the other ants building the bridge and also with the ants crossing above them. They can assemble and disassemble in seconds and the bridges dismantle when the ants in the structure perceive the traffic walking over them slows down below a critical threshold.

The researchers constructed a model to determine the bridge location that maximized foraging rate showing that animal self-assemblages can be dynamically modified in response to a group-level cost-benefit trade-off, without any individual unit having information on global befits or costs. Researchers found that the bridges start moving away from their original spot to provide swarms with an even shorter route, creating shortcuts and progressively lengthening by the addition of new individuals. The ants were performing a collective computation. According to Matthew Lutz, a graduate student in Princeton’s Department of Ecology and Evolutionary Biology and the study’s co-first author «At the level of the entire colony, they’re saying they can afford this many ants locked up in this bridge, but no more than that. There’s no single ant overseeing the decision, they’re making that calculation as a colony».

Ants exemplify “swarm intelligence,” in which individual-level interactions produce coordinated group behavior. The level of collective intelligence exhibited by the ants could provide new insights into animal behavior and even help in the development of intuitive robots than can cooperate as a group, that do not just rely on themselves, that could be able to navigate normal spaces individually but could also come together into larger structures –bridges, towers, pulling chains, rafts– when they face a situation that they cannot overcome alone. 2