The last issue of the Journal of Economic Perspectives published the article Is China Socialist? by Barry Naughton 1, which I summarize here. 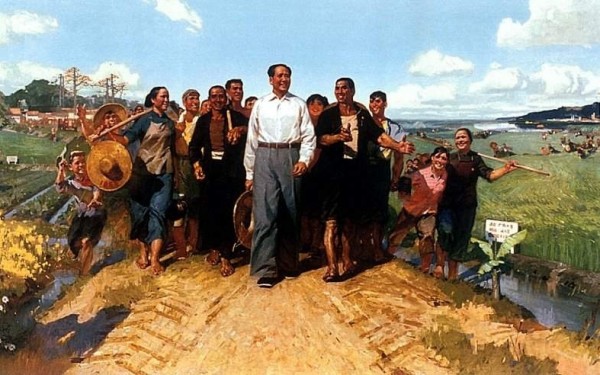 In order to address the question, the first thing Naughton does is to provide a working definition of socialism. Under a broad conception, a plausible socialist system would be judged on four criteria:

Until 1978 China was a “command economy”, but in the 1980s and 1990s it gradually lost control over a big share of national income. That changed again in the last 20 years, where government revenues raised from 14% to 38% of GDP. Revenues include taxes and social insurance premiums as well as land revenues and profits from state-owned enterprises (SOE). China’s fiscal revenue of 21.8% in 2015 is already equal to OECD average and higher than the figure for countries with similar income per capita. In contrast with other countries, income taxes are only 1.3% of GDP, while the value-added tax and enterprise income tax are higher. Social insurance contributions in China were 6.8% of GDP in 2015, lower than OECD countries, but high for a middle-income country. The other two categories, land revenues and profits from SOE are unique to China, and account for an extra 6.1% of GDP. With a control of 38% of GDP, the Chinese government is large, well resourced, and potentially highly intrusive.

Direct control of means of production in China has changed dramatically. Until 1978 practically all productive assets were owned by the state or by agricultural collectives. According to China’s 2013 Economic Census workers on state-controlled firms make up only 12% of total industry labor force, less than in was in France or Italy before 1980s wave of privatizations. But this figure may be misleading, as state ownership is concentrated in capital-intensive sectors. Overall, state ownership of industrial assets in 2014 was 38% of the total. State ownership is still more prevalent in the service sector, where the government controls 85% of the banking sector assets and the entire telecommunications and transport network, and essentially all education, cultural, health, scientific and technological services, as well as all public media.

The Chinese system has two mechanisms to foster development: bureaucratic incentives that reward officials for growth, and central planning.

Ever since the success of township and village enterprises in the early 1980s, Chinese policymakers have linked the career incentives of local officials with the economic performance of that locality. Beginning in the 1980s, the authorities formally established targets for bureaucrats at all levels and gave them explicit weight in an evaluation function. The literature on incentives says that such an incentive system can only work when a single objective has all the priority, which has been true for the Chinese leadership in the last decades, as it concentrated on growth.

The central planning used until the late 1970s was abandoned over the next 20 years. However, since the turn of the 21st century, long range plans have made a strong comeback (Chen and Naughton, 2016 2). China today operates with hundred of national and local plans written around the central five-year plans. In China, the target is enforced through administrative action, rather than legislation and regulation, but decentralized actors are left free to choose specific steps. Nevertheless there is little evidence that this planning has had any effect on shaping the Chinese economy. For instance, the high-speed rail network did not appear in the five-year plans until 2016, by which time 19.000 kilometers had already been built.

Between 1978 and 2014, China’s per capita GDP has multiplied 20-fold, the faster and longer growth of any other economy in history, passing from “low human development” to “high human development” according to the Human Development Index. In contrast, redistribution and the supply of public goods have met with only limited success. Previous to the economic miracle, China was a poor but very equal, with a Gini index at 0.28. Now it has become a much richer but relatively unequal society. The Gini index peaked at .49 in 2008-2009, and since then has drifted down slightly. While the inequality is higher in rural areas, the main source of inequality is the difference in living standards between the rural and urban populations, and this difference has also increased. Now the average urban income in 3.3 times the rural income, while in the early 1980s it was less than twice as much.

Poverty alleviation since the start of economic reforms, in contrast, has been excellent. The most conservative estimations give 260 million rural people below the poverty line ($1.90 per day at 2011 purchasing power parities) in the late 1980s and early 1990s, a number that has dropped down to 56 million in 2015 (Wei, 2016 3). It is hard to say whether this poverty reduction is due to government policy. China does have an active policy of targeting poor counties since 1986. About one-quarter of China’s counties are designated “poor,” which provides them with fiscal transfers for local economic development and infrastructure, food for work, and subsidized loans. The problem is that geographic targeting misses poor people outside designated regions and benefits wealthier people within the targeted regions. Also, a portion of budgetary transfers inflates administrative expenses rather than helping poor people (Montalvo & Ravallion, 2010 4). At least, these programs ensure that bureaucrats at the local level have some resources in their competition for growth.

The government’s direct contribution to social welfare benefits is still strikingly small. In 2014, budgetary outlays for education by China’s government were 3.6% of GDP; for health, 1.6% of GDP; and for public housing, 0.8% of GDP. Since personal income tax is very low, redistribution through progressive taxation is small.

The provision of public goods is best observed in the way China is now connected with a complete grid of highways and on the way to completion of a high-speed rail grid. However, the environmental protection was never a priority. So far, China has experienced substantial environmental deterioration that shows clear signs of flattening out, but only limited indications of significant improvement.

China is an autocratic government, with all political processes controlled by the Communist Party. One peculiar characteristic of China’s Communist Party is how frankly elitist it is. In 2002, the Party redefined its claim to legitimacy and focused it on educated elites and knowledge workers, rather than its traditional working class constituency. Indeed, in that sense, the major alternative label for China is “state capitalism” (Naughton and Tsai 2015 5). With power so concentrated, with little transparency and few checks or balances, it is inevitable that insider control will be pervasive and corruption a major problem.

In Naughton’s opinion, China cannot be considered a socialist country until it makes much greater progress fulfilling its own declared policy objectives of universal social security, modest income redistribution, and amelioration of environmental problems.

When money is not enough to help the poorest

Why the Soviet Union could not be reformed