Antimicrobial resistance is a complex problem that contributes to health and economic losses worldwide. Resistance to antimicrobial therapies reduces the effectiveness of current drugs, leading to increased morbidity, mortality, and health care expenditure. Because globalization increases the vulnerability of any country to diseases occurring in other countries, resistance presents a major threat to global public health.

Mycobacteria, such as Mycobacterium tuberculosis and Mycobacterium ulcerans, are resistant to many antibiotics and their cell-wall structure is believed to be largely responsible for the wide range of resistance phenotypes. M. tuberculosis is a major cause of death worldwide, and a formidable enemy infecting one third of the world. In 2014, there were an estimated 9.6 million new tuberculosis (TB) infections worldwide. By comparison, M. ulcerans causes Buruli ulcer (BU) and is the third most important mycobacterial disease after tuberculosis and leprosy worldwide. Furthermore, the World Health Organization (WHO) reports that it is endemic in West Africa as well as China and Australia, and its geographic range is increasing. 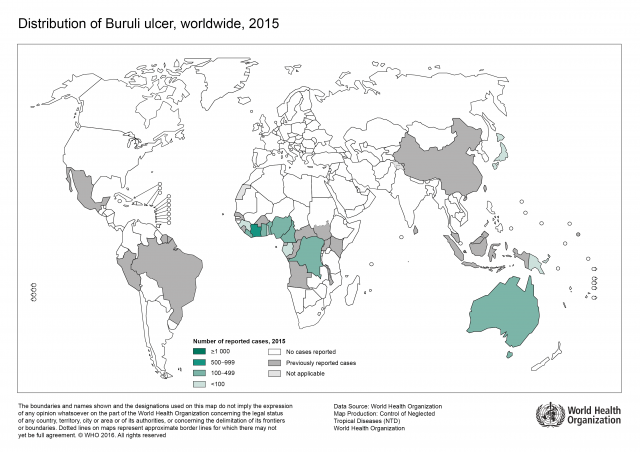 Frequent and inappropriate use of antibiotics to treat TB has resulted in the emergence of multidrug-resistant M. tuberculosis and extensive drug-resistant M. tuberculosis to front-line (isoniazid and rifampin) and second-line drugs (amikacin, kanamycin and capreomycin). WHO recommendations for BU treatment, as with TB treatment, involve combination therapy (rifampicin, streptomycin or rifampicin, clarithromycin). However, as therapy is rolled out, the emergence of resistance is an inevitable outcome. Ineffective treatment often requires surgery, limb amputation, and sometimes results in death. Therefore, there is an urgent need to develop new drugs and innovative strategies to tackle mycobacterial infections.

Considering the time-consuming discovery process and the high mutation rate of Mycobacterium spp. to current antibiotics, novel mechanisms for attack on bacteria are essential. In recent years, photoactive therapy to combat cancer or bacterial infection has attracted increasing interest.

Photoactive antimicrobial therapy includes two kinds of therapy, photodynamic antimicrobial therapy (PDAMT) and photorelease antimicrobial therapy (PRAMT). PDAMT and PRAMT are promising strategies for treating surface bacterial infections, especially patients with skin infection, scar tissues, burn infections, leg ulcers in diabetes patients, acne infection, and for sterilization of some surfaces. PDAMT utilizes light and oxygen in combination with a photosensitizer. The ground state of the photosensitizer absorbs visible light to reach a excited state and then generates the reactive oxygen species, which is highly toxic and can cause non-specific damage to bacterial cell components. On the other hand, PRAMT can control the time and place of release of a therapeutic agent to achieve targeted therapy and reduce systemic toxicity to host tissues.

Now a group of researchers, that includes Ikerbasque’s Luca Salassa working at DIPC and UPV/EHU, has designed 1 a photoactive ruthenium(II) complex to incorporate the anti-tuberculosis drug, isoniazid, that could be released from the Ru(II) cage by photoactivation with visible light.

The results showed that the complex is inactive in the dark, was inactive against the Gram-negative bacterium E. coli and showed only slight activity once photoirradiated with blue light for 2 hours against the Gram-positive bacterium B. subtilis. But when photoactivated just 1 minute is 5.5 times more potent towards M. smegmatis compared to the clinical drug isoniazid alone. A very important feature is that the new complex is highly selective in killing mycobacteria also versus normal human cells, towards which it is relatively non-toxic.

These results suggest that this new ruthenium(II)-based photoactivatable prodrug might provide a promising new strategy for combatting antibiotic resistance. Phototherapy using ruthenium complexes such as this one is likely to be more successful for surface infections where topical administration is facile and the light does not have to penetrate deeply. Hence a target for treatment might be Buruli ulcer.

A light on the horizon: New antibiotic without detectable resistance discovered in uncultured bacteria

Modulation of the resistance of thin metals using the Hanle effect