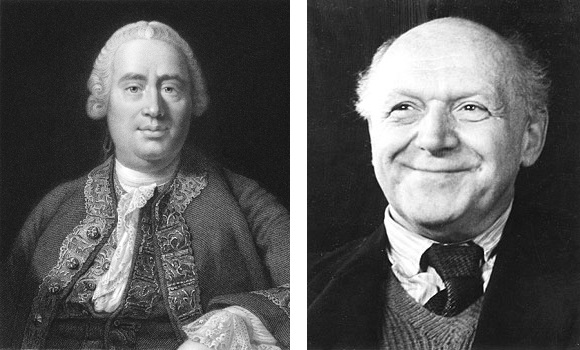 DAVID HUME: You’re not going to believe me, Otto, but I have a new girlfriend.

OTTO NEURATH: Com’on, Dave, at your age, and within this crappy retirement home in which we’re confined.

HUME: Incredible or not, it’s a fact. She is a German existentialist philosopher, who was Heidegger’s affair a few months ago.

NEURATH: Well, lucky you. But, is your organism fit enough to fight with such a lioness?

HUME: Just about that came I to talk with you. I was planning to buy online one or two boxes of Viagra pills.

NEURATH: Oh, Dave, that’s dangerous. You must take care of your heart.

HUME: That’s the least of my problems now. It’s nice to die for a noble cause.

HUME: Keep your wordplays for another philosopher, and let’s get to the point. I’d like to ask you about the most likely effects of the pills.

NEURATH: Well, you are the supposed expert on inferences about the future, and, if I remember well, your thesis was that one cannot predict anything at all with certainty.

HUME: Right. Any inference whose premises are a limited set of singular facts, and whose conclusion is a universal regularity, is a fallacy. So, we cannot logically deduce what will happen in the future from what we know (or we think) has happend in the past.

NEURATH: Then, how do you pretend that I answer your question?

HUME: Oh, I overheard the other day that you were gossiping with Carnap about some mistake you thought my argument had. I didn’t care too much by then, but in this new circumstances… I told myself ‘hey, perhaps my good friend Otto could keep me out of my scepticism’. I need it today more than ever.

NEURATH: Ah, OK, I think I remember. Well, in that case, I shall explain my argument. Please, don’t take it as a case of Ottosplaining.

NEURATH: By the way, ‘equally probable’ does not mean ‘with the same objective probability’, because, according to you, we also ignore everything about future probabilities. It’s rather what our Bayesian friends call ‘subjective probabilities’. That is, for us is equally probable any possibility than any other one. We can only affirm something tautological, for a tautology will be true no matter what happens in the future. Tautologies include, for you, all mathematical theorems as well, isn’t it?

NEURATH: To put an example, according to your thesis, it is impossible for us to infer what length your penis will reach after swallowing the blue pill. Any length in which we might think would be exactly equiprobable with any other possible length.

HUME: That’s what I think… And thinking it doesn’t help me too much in this situation.

NEURATH: Well, Dave, in that case, consider how many lengths could a priori your penis reach.

HUME: What do you mean by ‘how many’?

NEURATH: Let’s say it could get between 0 and 1 cm, or between 1 and 2 cm, and so on. How many possibilities like those are there?

HUME: Well, in that case, there are infinite possibilities, obviously.

NEURATH: Exactly. And, if your thesis was right (and what a big ‘if’), then every one of those infinite possibilities would be equally probable for us.

HUME: You’re right. And, since they are infinite, then the probability of any one of them is just equal to zero. Is that your point?

NEURATH: Not yet. Think a little bit more about it: what is the probability that your penis’ length this night, under the Viagra effects, lies between 15 and 20 cm?

HUME: Obviously, it’s zero. As it is zero the probability that it’s between 0 and 5 cm… A meagre consolation.

NEURATH: Wait a minute, Dave, there’s a much better consolation waiting for you. Try to compute the subjective probability that your penis’ length reaches at least 20 cm.

NEURATH: I think your German girlfriend would be still happier. But don’t go so quickly. Do you realise that the same argument is exactly equally valid for any other length; for example, for 500 Km instead of 20 cm.

HUME: What are you saying, old dumbass? Are you suggesting that it’s totally sure that my dick will get more than 500 Km long?

HUME: I’m not so sure. There must be some mistake in the argument.

NEURATH: Exactly, there must be something wrong. But our calculations are simple mathematical steps, the mistake cannot be in them. I guess it is your premise that all future probabilities are equally probable the one we should forget. Remember, what a bit ‘if’!

NEURATH: In fact, it’s not only that we have reached from your thesis the ridiculous consequence that your penis will be longer than N cm, no matter how big N is. It is that we have derived a true contradiction in your theory.

HUME: What do you say, which contradiction?

NEURATH: Your theory entails that it is impossible to make any non-tautological prediction about the future, but we have just make one (for example, that your dick will get a length higher than 20 cm).

NEURATH: And, since the only non-tautological premise we have used in deriving this contradiction is your claim that all future conceivable possibilities are equally probable for us, then we must conclude that we have to reject that claim. In another words, it cannot be true that all future possibilities are equally probable for us.

HUME: But my argument proved just that. Why do you think I get one of the most luxurious suites in this retirement home for creaky philosophers? Because my argument is amongst the Top-Ten in all the history of philosophy!

NEURATH: I’m not saying is not important; I just say it cannot be right, because it leads to contradictions. My replica establishes that, from the premise that (A) future does not logically follow from the past, we cannot infer the conclusion that (B) all future possibilities are exactly equally probable by us. B is a different claim from A, it doesn’t follow from it, and hence, B might be false even if A were true.

HUME: But then, how probable are a priori for us future events?

NEURATH: No fucking idea. I suspect that, by applying Ockham’s razor, we might say something like future probabilities are the simplest projection of past frequencies, but I don’t have a sophisticated nor convincing argument for that. My friends Carnap and Reichenbach were working on the topic, I think.

HUME: Well, all right, but then, what happens with my Viagra?

NEURATH: If I were you, I’d extrapolate past experience in the simplest possible way… and that gives something like a 0.7 probability that you end having a nice round with your lady.

HUME: God bless you, Otto! Oh, what am I saying, it’s most likely that there are no God.

Why emergent levels will not save free will (& 2)