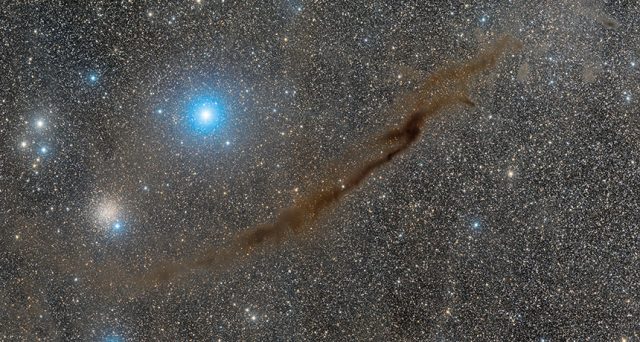 The shape of a gas cloud in the Musca constellation has been mapped in 3D, giving astronomers an idea about why it has failed to produce stars. The 3D map shows the cloud is a thin, flat square, with the gas spread out more than once believed, though it could begin forming stars in the next 10 million years.

The skull of an ancient ancestor of modern baleen whales shows that the massive Llanocetus denticrenatus had thick gums and teeth that it used to chomp on large prey, shaking up ideas about when whales transitioned to filter feeding.

The deadly fungus that has been plaguing frogs, toads and salamanders around the world for two decades has been traced back to East Asia. Researchers examined the genomes of a number of Batrachochytrium dendrobatidis samples collected around the world to find out where the fungus originated.

Mini-antibodies in shark, camel blood may lead to new treatments

Learning how sharks’ mini-antibodies work, along with research on nanobodies from camels, llamas and various other animals, could lead to new treatments for rheumatoid arthritis, psoriasis, lupus, brain cancer and some rare diseases.

Breastfeeding not tied to improved cognitive function in adolescence

Newborns who underwent an exclusive and prolonged breastfeeding program have similar scores in tests of executive function, fine motor skills, information processing speed, nonverbal memory, word recognition and visual-spatial orientation at age 16, compared with those who received standard care. The findings, based on data from 13,557 children in Belarus, did show slightly increased verbal function among those in the breastfeeding intervention.