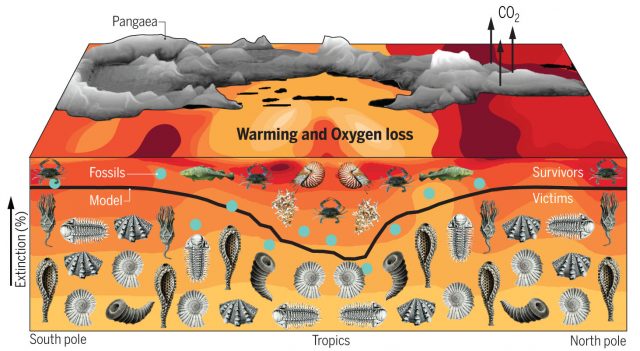 A mass extinction of nearly all marine animals approximately 252 million years ago was caused by volcanic activity that released greenhouse gases, resulting in warmer ocean waters and depleted oxygen. Researchers used computer models to simulate conditions of the so-called Great Dying, saying that current changes in climate could put Earth on a similar path.

A ground-based telescope has been used to measure helium in the atmospheres of alien planets, getting better results than its space-based counterparts. The telescope at Spain’s Calar Alto Observatory helped one set of researchers observe an exoplanet leaving a wide tail of helium in its wake as it orbits its star, and a different team spotted helium in another exoplanet’s atmosphere.

Air-bubble pockets created by slapping their legs on the surface help keep flat-tailed house geckos afloat as they dash across bodies of water. “They are partially hydroplaning,” said Jasmine Nirody, whose team filmed the geckos with high-speed video cameras to analyze the process.

Sleeping more than 8 hours a night may hurt health

Research suggests the optimal amount of sleep for heart health is six to eight hours per night. The study of more than 116,000 people in 21 countries found that participants who had eight to nine hours, nine to 10 hours and 10 hours or more of sleep a night had 5%, 17% and 41% increased risk of cardiovascular disease or death, respectively.

Rats that had their uteri removed had trouble remembering how to navigate a maze, suggesting that the reproductive organ may play a role in memory. Researchers also found that removing the uterus affected hormone levels, despite the rats still having their ovaries.