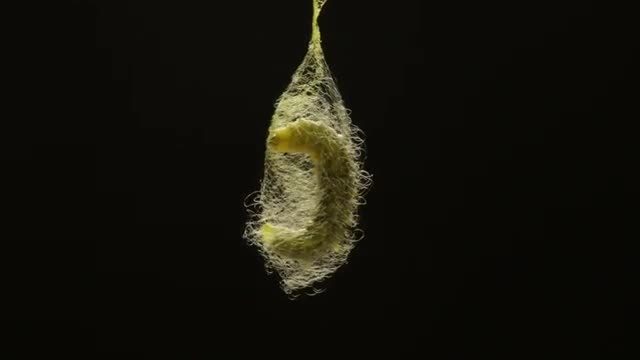 Spiders build their webs using the silk they synthesize and secrete from their spinning glands, structures located in the back of the abdomen. The most primitive species have few glands and build their nets with fairly uniform silks. The most evolved spiders, on the other hand, have up to seven different spinning glands with which they synthesize silks with specific and different properties among them. Some silks are stronger and more flexible than a steel cable of the same thickness and are studied as biomaterials with possible industrial and medical applications.

The web allows the spider to capture prey without having to spend energy hunting. On the other hand, manufacturing the threads that form it is expensive energetically because silk is mostly composed of proteins. In addition, over time, the silk loses its adhesiveness and the spiders eat it to recycle those components and replace the aged threads with new ones.

Weaving a web is a complex task with a series of structured steps that follow each other sequentially, an authentic constructive program. In the first place, the spider places a series of non-sticky threads at the periphery of the selected place that act as a frame and are connected to support structures. Then it adds a few radial threads that go from the center to the frame and act as a frame. Sometimes this phase requires trying to connect with objects that are around and the spider gets it by floating threads in the air until one is fixed to an appropriate place. The radial threads and the frames of the webs are usually formed by silk produced in the major ampullary gland, which contains two types of proteins (Spidroin 1 and Spidroin 2) and these threads are characterized by their rigidity and strength. Spiders move through these threads when they drag some of their prey.

Once this preliminary structure is finished, the spider adds radial non-adhesive threads and in some cases adds new frame threads not only in the periphery but in intermediate levels that will give consistency and resistance to the network. At the center point add several dense turns of non-sticky silk and that will be its hub. However, that makes the spider very conspicuous for birds and other predators and many remain hidden with only one leg grabbing the web to feel the vibration that implies that prey has fallen into the trap.

After that phase and from the hub the spider begins to segregate a fairly open spiral of silk that ends at the outer edge and has a spacing five times greater than that which will have the final web. That new crucial phase, placing the sticky silk spiral, starts in the opposite direction, starting from the edge of the net and building inward, eliminating at the same time the much less compact spiral that had deposited before from the center to the outside. The silk that forms the spiral is composed of a less rigid fiber, more elastic and deformable, and it is sticky but not as resistant as the radial threads. Finally, the spider reinforces the joints between the radial threads and the spiral to achieve an effective distribution of the tensions and removes the lines in the center of the network, leaving a gap in some species or replacing them, in others, with new threads.

The genus Hymenoepimecis is formed by 20 species of wasps of which 12 are parasitoids of spiders 1. H. argyraphaga is a Costa Rican wasp whose host is the spider Plesiometa argyra. The adult female wasp nails the stinger to the spider that is in its hub in the center of the net and leaves it temporarily paralyzed. Next, the wasp puts an egg in the abdomen of the spider. When the egg hatches, the larva begins to feed sucking the hemolymph of the spider through small holes, while the arachnid makes a normal life, improves and repairs its network and catches insects. This phase lasts one or two weeks while the larva matures. At the end of that period, the larva is ready to form the pupa and now it is she who, the night before killing its host, injects a chemical cocktail to the spider and turns it into its slave.

Surprisingly, the new injection causes the spider to start building a new web, totally different from anything that has been made up to that moment, and when it finishes it, it places immobile in the center of the hub, she has finished its last task. If after the larva has injected the spider and before it has begun to weave the anomalous web the larva is removed, even so, the spider starts to make its aberrant web. And the effects are long term because the spiders that were removed from the larva build modified nets also the next night, although some slowly revert to make more normal webs. 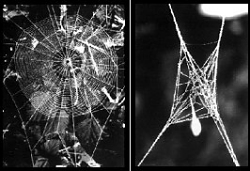 The modified net consists of a few radial lines strongly reinforced with several threads each and fixed directly to the substrate 2. Sometimes there are some frame threads or a temporary spiral. These reinforced threads are woven using a subroutine of the same sequence of movements that the spider performs during the construction of the frame lines in the normal network, repeated over and over again. If there are frame lines they are much shorter and closer to the center than those of normal nets. The central portion of the hub is never free of threads, as is usual in a normal network of this species. These modified webs are called “cocoon webs” and the most elaborate have spirals, frames and a network above and below the central point, confirming that they are modified nets. From that modified web hangs the cocoon where the wasp will complete the metamorphosis.

The constructions of the cocoon webs are very consistent and they are built using modified subroutines. Other characteristics of the normal construction of a spider web, such as replacing lines, breaking lines and fixing them to others, never occur. The temporary and sticky spirals are not formed and the threads of the central area of the hub are not eliminated. The modified web is a durable and very strong support for the wasp’s cocoon. A single mistake by the spider could be disastrous for the larva of the wasp. Other related wasps such as H. robertsae have cocoons that can be damaged by heavy rain which makes their larvae more vulnerable. Here H. argyrafaga takes advantage of having at its command a spectacular weaver such as spiders and generate a support network for its cocoon practically indestructible. After that stage, the larva undergoes metamorphosis, kills the spider with a poison and absorbs the last liquids left in its body before discarding the empty exoskeleton and building the cocoon that hangs from the center of the net that the spider has just built. The larva undergoes the final phase of the metamorphosis within this cocoon. Finally, a new wasp emerges from that cocoon, mates and starts the cycle again.

The larva is able to induce specific behavioral responses in the spider and if it is capable of acting on them, those patterns of behavior must be independent modules. Many parasites manipulate their host’s behavior, but most, especially parasitoid insects, induce relatively simple changes, such as moving from one habitat to another, eating more or eating less, or altering their rest and sleep patterns. These changes can be induced with something relatively simple like modifying a receptor but in the case of Hymenoepimecis it is a much more sophisticated change: it stops building a web that allows hunting prey and replaces it with a cobweb with a totally different design and that only serves to one thing: hanging the cocoon of the wasp in a convenient and resistant position.