With the possible exception of Avogadro’s number, which was in reality defined and made popular by Stanislao Cannizzaro, many things in the sciences are usually named after the person who makes them popular. The Seebeck effect is an example. Originally discovered in 1794 by Alessandro Volta, it is named after Thomas Johann Seebeck, who in 1821 independently rediscovered and, importantly, described it.

The Seebeck or thermoelectric effect is the generation of an electromotive force in a circuit containing two different metals or semiconductors when the junctions between the two are maintained at different temperatures. The magnitude of the electromotive force depends on the nature of the materials and the difference of temperature. Hence, thermoelectric materials can convert waste heat into electricity. The effect is the basis of the thermocouple.

Today, when we want to compare the thermoelectric efficiency of a material we use a dimensionless figure of merit called ZT. This figure is directly proportional to S (squared) and the electrical conductivity of the material – the power factor, and inversely proportional to the thermal conductivity. If we think about it, it seems only logical that the more the ability of a material to conduct heat, the more difficult it is to maintain a difference in temperature.

Let’s remember at this point that thermal conductivity has two main factors – the electronic and the lattice contributions – and its relationship with electronic conduction. The vibrational thermal energy for a material consists of a series of elastic waves, which have a range of distributions and frequencies. The thermal scattering of free electrons during electronic conduction is by these vibrational waves, and these elastic waves also participate in the transport of energy during thermal conduction.

The single quantum of vibrational energy is called a phonon. Thus, in other words, phonons play a major role in the Seebeck effect. They lose momentum by interacting with electrons (or other carriers) and imperfections in the crystal. If the phonon-electron interaction is predominant, the phonons will tend to push the electrons to one end of the material, hence losing momentum and contributing to the thermoelectric field.

The thermoelectric efficiency can be thus enhanced by decreasing the thermal conductivity while keeping a high power factor. Materials have been doped or nanostructured in order to get a high power factor combined with a low thermal conductivity, yielding, i.e., ZT ≃ 2.2 in PbTe. In the proximity to a phase transition ZT may also soar. Recently, however, it has been reported for SnSe the highest thermoelectric figure of merit ever reached in a material without doping, material treatment, or without being sharply enhanced by the proximity to a phase transition: ZT ≃ 2.6 above 800 K. Why is this so? 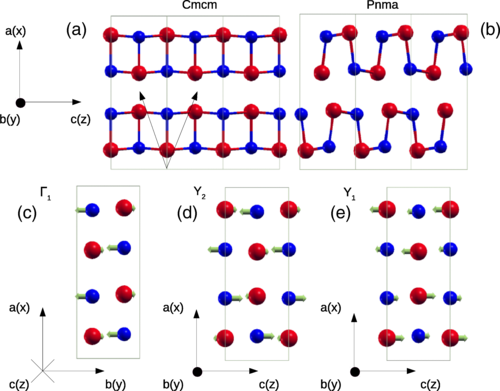 SnSe is a narrow gap semiconductor that crystallizes at room temperature in an orthorhombic Pnma phase. At T ≃ 800 K it transforms into a more symmetric base-centered orthorhombic Cmcm structure (see Figure). The order of the transition is not clear: some works claim it is a second-order transition and others it has a first-order character. The most interesting thermoelectric properties appear in the high-temperature phase, where the reduction of the electronic band gap increases the number of carriers providing a higher power factor, while the thermal conductivity remains very low

The researchers calculate the lattice thermal conductivity of the Cmcm phase by combining the anharmonic phonon spectra with perturbative and nonperturbative third order force constants. They find that the vibrational properties of SnSe in the Cmcm phase are dominated by huge non-perturbative anharmonic effects. Importantly, they find a phonon collapse that is consistent with a second-order phase transition between the Pnma and Cmcm.

They show for the first time that these effects are not only crucial in the phonon spectra, but also in high-order force constants, which have a huge impact on the calculated thermal conductivity. Actually, the inclusion of nonperturbative effects is crucial for obtaining a lattice thermal conductivity in agreement with experiments. This new knowledge will open ways to design and build more thermoelectric efficient materials.

What the heck is a phonon?