The way a particular reaction proceeds, described in terms of the steps involved, is called mechanism. The study of organic chemistry is, to a great extent, the study of reaction mechanisms and textbooks content both their description and their applications. But something has come to revolutionize the world of mechanisms: surface chemistry. On-surface synthesis is appearing as an extremely promising research field aimed at creating new organic materials. A large number of chemical reactions have been successfully demonstrated to take place directly on surfaces through unusual reaction mechanisms. As in any new world, some maps are badly needed, and the review recently published 1 by Sylvain Clair (Aix Marseille Université & Université de Toulon) and Ikerbasque Research Professor Dimas García de Oteyza (CFM & DIPC) is meant to be the reference for explorers.

On-surface synthesis is a newly developing field of research that aims at making use of well-defined solid surfaces as confinement templates to initiate chemical reactions. The concepts of supramolecular chemistry are applied so that surfaces can be functionalized in such a way that nanometer-sized elementary building-blocks can self-assemble on them. Therefore, on-surface synthesis represents in a sense an extension of heterogeneous catalysis whereby the initial precursors, the intermediate states, and the reaction products all remain in an adsorbed state, usually in the submonolayer regime.

The interest in creating nanoarchitectures directly on surfaces is threefold. First, on-surface synthesis gives access to new reaction mechanisms in mild conditions that would be not easily accessible in standard chemistry conditions. This is the case for the alkane polymerization, the formation of oligophenylene macrocycles, or the synthesis of polyacenes, radialene, or arynes. Second, it represents an efficient route to the formation of robust organic networks and 2D polymers. And finally, the full range of available surface science techniques can deliver exquisite characterization of the different reaction processes with atomic precision.

On-surface synthesis can, thus, be considered as a newly developing type of chemistry that nicely complements our current synthetic capabilities. However, from a methodological point of view, there are much stronger differences with respect to conventional chemistry than a newcomer to the field may imagine. The confinement to two dimensions and the often-used vacuum environment, consequently with an absolute absence of solvents, dramatically change the range of chemical reactions and the experimental techniques that can be applied to characterize the outcomes.

Clair and García de Oteyza do not aim in this review to describe all existing reactions reported in the literature, as there are many reviews available for an extensive description of all chemical systems, for which they provide numerous references. The authors focus on a key aspect of on-surface synthesis: supported chemical reactions leading to an effective covalent coupling between organic precursors (mainly the formation of C−C or C−N bonds). 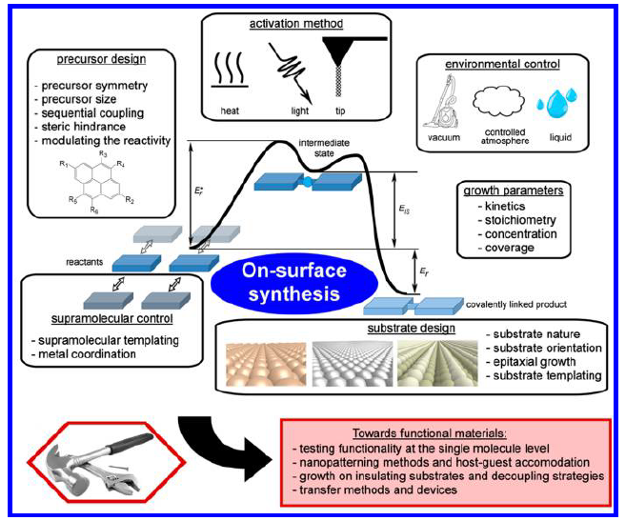 The authors draw a few general categories: precursor and substrate designs, the use of extrinsic metal adatoms, the supramolecular templating effect, the control on the growth parameters, the environmental control, and the choice of the activation method. They propose to specifically define the different approaches available and to categorize them. As a consequence, the different experimental studies found in the literature are listed and classified into each of these categories.

The effective maturation of the on-surface synthesis field is shown by some systems that are getting closer to application-relevant levels thanks to the use of advanced control strategies. The example of graphene nanoribbons is particularly illustrative due to its wide flexibility and versatility and to the high level of control achieved.

The possibility of measuring properties at the single-molecule level, the development of surface nanopatterning methods, the possibility of growing covalent systems on technology-relevant insulating substrates, and the first attempts to create functional devices based on an on-surface synthesis are also detailed.

It is important to note that an important generic limitation to on-surface synthesis is that it is restricted to the use of single crystal surfaces. Also, the formation of the products is constrained to quantities corresponding to a maximum of a single monolayer. A fundamental breakthrough in the field will be made by achieving an up-scaling of the processes, opening the way to mass production. For this, it will be necessary to find a way to regenerate the surface to allow for the realization of cyclic processes of the reactions, as is the case in traditional catalysis.

On-surface synthesis appears now as a mature field of research that possesses the rare ability to bring together basic and applied research interests. It is expected to attract an even wider community and to provide more astonishing results in the near future. And reviews like this one will become handy references.