Tetrapyrroles,“the pigments of life”,are key molecules for the metabolism of living organisms, supporting functions of vital importance such as electron transport, light-harvesting and oxygen reduction. Within this family of compounds, porphyrins are organic pigments characterized by the possesion of a cyclic group of four linked nitrogen-containing rings called porphyrin, the nitrogen atoms of which are often coordinated to metal ions. Thus, they are tetrapyrrolic macrocycles with a planar structure and an aromatic circuit of 18 π-electrons. Porphyrins differ in the nature of their side-chain groups. They include the chlorophylls, which contain magnesium; and haem which contains iron and forms the prosthetic group of hemoglobin, myoglobin and the cytochromes.

As we could expect, it has been demonstrated that the nature of the porphyrin-porphyrin links dramatically affect the electronic properties of oligomers. The number of them (that is, singly, doubly, or triply connected), the site where they occur and the chemical nature of the linker(s) being key factors. The highest degree of π-conjugation and lowest HOMO–LUMO gaps is found in triple linkage, planar, fused porphyrin oligomers. These oligomers show remarkable transport properties compared to typical “benchmark” systems.

Triply fused oligomers up to 24 porphyrin units (porphyrin nanotapes) have been obtained in solution after a long multi-step synthesis with extremely low overall yields. Moreover, the low HOMO–LUMO gap of the resulting tapes means severe stability issues, the more, the longer the oligomer. Additionally, the π-stacking tendency of these conjugates grows with the number of units, leading to solubility problems.

Most of these problems has been resolved for π-conjugated systems by a new solvent-free process: on-surface synthesis on atomically clean surfaces under ultra-high vacuum. Interestingly, the resulting on-surface synthesized nanostructures can be directly accessed by local-probe techniques such as scanning probe microscopy, allowing for a detailed “in situ”structural and electronic characterization with molecular or even chemical bond resolution. 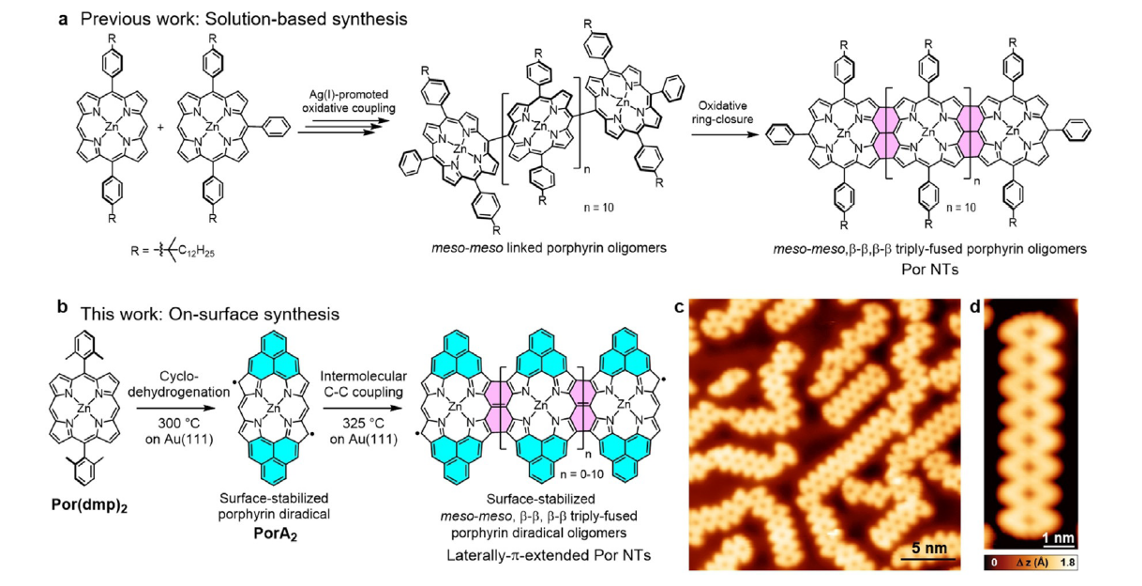 Now a team of researchers presents 1 a simple, two-step strategy for the on-surface synthesis of laterally π-extended porphyrin nanotapes. The structural and electronic properties of individual nanotapes, both on Au(111) and NaCl/Au(111), have been scrutinized by high -resolution scanning probe microscopy/spectroscopy complemented with density functional theory calculations. Remarkably, the fabricated PorNTs feature magnetic end states resulting from the presence of an unpaired electron at each end of the Au(111)-supported nanotape.

This straight forward fabrication of porphyrin nanotapes is a proof of concept for the realization of appealing surface-supported architectures by the complexation of magnetically active metal ions within the inner porphyrin cavity. Applications such as 1D spin filters, sensors, or catalyits come to mind.

On top of that, porphyrin nanotapes provide a scaffold that allows the arrangement of several magnetic ions at a close distance, thereby allowing their interactions. This, together with the inherent open-shell character of the tapes, may lead to more exotic physical phenomena and quantum applications, which go beyond the actively explored pure carbon-based 1D magnetic systems.