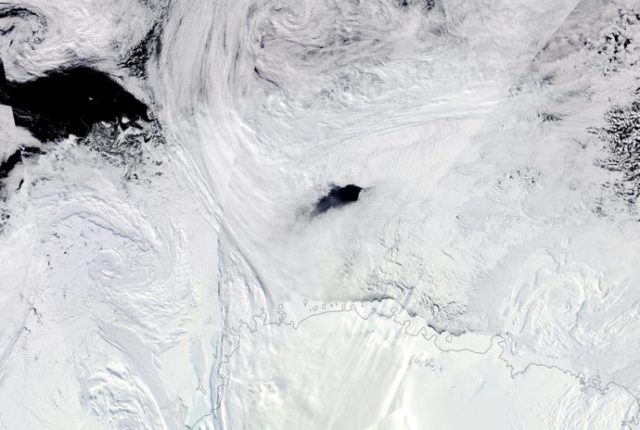 Researchers used robotic floats and tagged elephant seals to learn why huge holes called polynyas are opening up in Antarctic ice. Strong storms and a higher salt content in the surface waters of the Southern Ocean are likely contributing to the formation of the holes.

The Tyrannosaurus rex likely had a sense of smell that matched its massive size. The researchers, who correlated models of living creatures with information about dinosaurs, say the gene counts of T. rex were probably not much smaller than modern house cats and chickens.

Strange mass on Moon may be remnant of asteroid crash

A large, unusual mass on the Moon’s south pole may be the remains of an asteroid crash that formed a basin there. “Imagine taking a pile of metal five times larger than the Big Island of Hawaii and burying it underground,” said Peter James, lead study author.

Number of plant extinctions greater than once thought

At least 571 plants have gone extinct over the last 250 years. “This study is the first time we have an overview of what plants have already become extinct, where they have disappeared from and how quickly this is happening,” says Aelys Humphreys, study co-author.

The Sun is capable of unleashing a superflare 100 times more powerful than the large radiation bursts it has produced in recent years that have been known to cause problems with Earth’s electronics. Researchers say superflares are more common among younger stars, but they note the Sun can produce superflares every few thousand years or so.