Cortical neurons often fire together as a group, rather than independently, and these coactive groups, also known as neuronal ensembles (or chains, assemblies, attractors, clicks, motifs, songs, bumps, etc.), could constitute emergent functional units of the brain, as modular building blocks of memories, thoughts, motor programs, computations, or perceptual or mental states.

In order to investigate them, the fact that some fluorescent molecules can respond to the binding of Ca2+ ions by changing their fluorescence properties is most useful. Techniques based on these changes can be used to optically probe intracellular calcium in living animals. Thus, so-called calcium imaging shows the calcium status of an isolated cell, tissue or medium.

Regardless of the type of indicator used, the imaging procedure is generally very similar. Cells loaded with an indicator can be viewed using a fluorescence microscope and captured by an appropriate camera. Confocal and two-photon microscopes provide optical sectioning ability so that calcium signals can be resolved in microdomains, even in thick samples, such as mammalian brains. Hence, using two-photon calcium imaging, neuronal ensembles can be found in mouse visual cortex within time windows of 200–500 ms.

These ensembles are activated by visual stimuli but are also present in spontaneous activity, indicating that they can be stored and replayed by cortical circuits. Optogenetics, a neuromodulation method that uses light to control neurons that have been genetically modified to express light-sensitive ion channels, can create artificial ensembles. Using two-photon optogenetics in awake mice, the co-activation of a group of neurons creates these artificial ensembles that are stably imprinted. Such imprinted ensembles can also be re-activated as a whole by stimulating individual neurons, demonstrating pattern completion capabilities. But, do these cortical ensembles have a role in behaviour?

To explore this, a team of researchers from the NeuroTechnology Center of Columbia University, including Ikerbasque Research Professor Rafael Yuste, combined 1 calcium imaging of neuronal populations, two-photon microscopy, and population analysis to identify neuronal ensembles in primary visual cortex from awake mice performing a visually guided Go/No-Go behavioural task. Then, using two-photon holographic optogenetics, holographic meaning in this context that the activation is not limited to a 2-dimensional plane but was volumetric, specific sets of neurons were activated during the presentation of visual stimuli to disrupt or recall cortical ensembles while measuring behavioural performance at different contrast levels of visual stimuli. 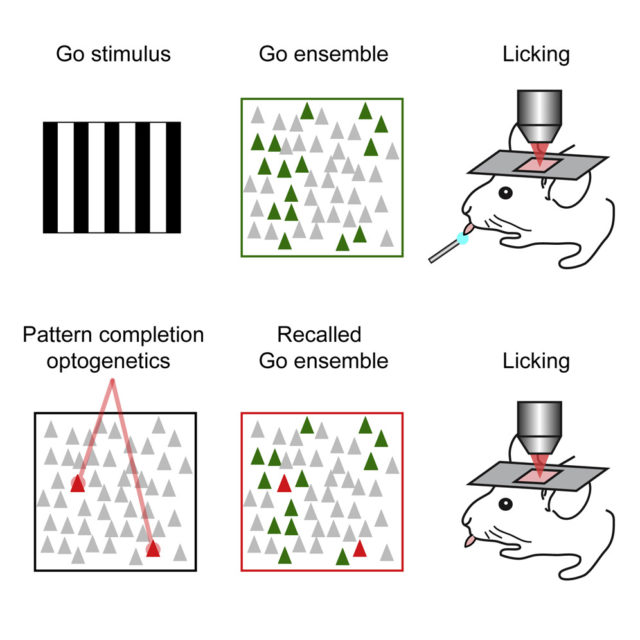 Whereas optogenetic activation of a random set of cells during high-contrast visual stimuli disrupted ensembles and deteriorated behaviour, activation of neurons with pattern completion capability reliably recalled behaviorally relevant ensembles and improved task performance to low-contrast visual stimuli. Moreover, the researchers found that the Go ensemble was also activated when the animal incorrectly responded to the No-Go stimulus.

These different lines of evidence demonstrate that the activation of cortical ensembles can be necessary and sufficient for visually guided behaviour.

These results, together with the recent demonstration that optogenetic manipulation of neurons in deep brain areas can alter social or feeding behaviours opens the possibility to study the physiological role of neuronal ensembles in other brain areas and behavioral tasks and also, potentially, to use pattern completion to manipulate neuronal ensembles and correct the pathophysiology of mental or neurological diseases.