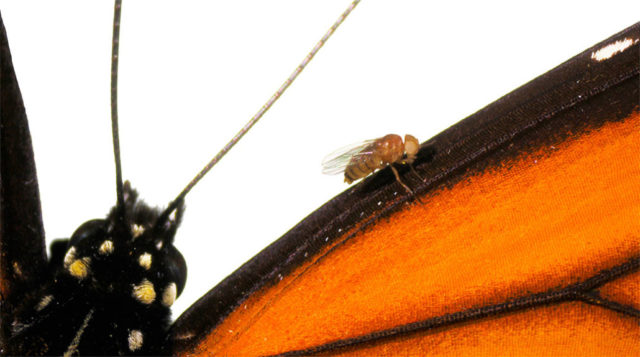 Researchers have edited the genes of fruit flies to make them able to digest the toxins in milkweed like monarch butterflies do. It took just three genetic tweaks to give the fruit flies that ability.

Bumblebees have been observed refraining from sleep to care for offspring, even if the larvae and pupae aren’t their own. Researchers filmed the bees in a series of experiments to see how they reacted around the clock in the presence of the hive’s young, finding that caring for the brood affected their sleep patterns.

Water plumes from oceans beneath the surface of Saturn moon Enceladus contain nitrogen and oxygen compounds, which could be the basic ingredients that lead to the creation of life. Data were collected by NASA’s Cassini mission.

A gel has been developed that may make vegetation more resistant to wildfires. Applying ammonium polyphosphate through the gel rather than dropping it from a plane results in 50% more of the fire retardant adhering to vegetation, researchers found.

Scientists say they’ve been listening to what may be earthquakes on Mars using a seismometer placed on the planet by NASA’s InSight probe. The equipment, which picks up vibrations, has detected an estimated 21 Martian quakes since April.