Usually, optical activity is understood as the ability some substances have to change the handedness of polarized light when it goes through them. Molecules that show optical activity have no plane of symmetry. The commonest case of this is in organic compounds in which a carbon atom is linked to four different groups. An atom of this type is said to be a chiral centre. Thus, molecular chirality is generally considered to be a geometrical property associated with the spatial arrangement of the nuclei in the molecule, and optical activity is understood in terms of the quantum theory of the interaction between light and electrons and molecules.

An interesting question is, can “chirality” be transferred from one molecule to another? Yes, of course, but with some limitations. Actually, the idea of geometric “transfer of chiral information” is commonly accepted in chemistry in the sense that the formation of chemical bonds between a chiral and an achiral subunit transforms the entire composite system into a chiral one. But, by its nature, such a mechanism can include only local changes in the geometry arising from the rearrangement of the involved chemical bonds. In other words, it can happen but the information travels no more than a few angstroms. This is true for molecule−molecule as well as molecule− surface interactions and can be simply understood in terms of changes of the electronic structure of the composite system.

But in 2015 Blanch et al 1 demonstrated that chiral information transfer is not that well understood. In this experiment, chirality information was transferred from a chiral tag to an achiral probe molecule located at a long enough distance that would make a direct chemical-like transfer, mediated by the local bond formation and breaking, just impossible. The results gave no room for doubts: when the researchers measured the Raman the optical activity of their achiral probe, located 20 nm away from the chiral tag!, it was nonzero. The only explanation is that chirality information is transferred by an electromagnetic field.

But, how? Understanding this mechanism represents a major milestone in developing novel nano-sensors and devices capable of detecting and inducing chiral behavior, as well as in exploring the intriguing possibility of using the electromagnetic field for inducing enantiospecific chemical reactions. 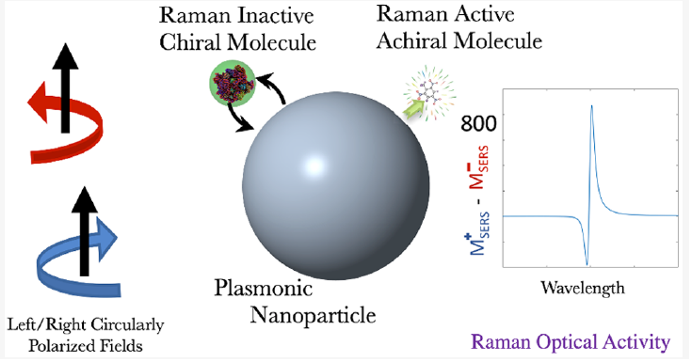 Now, in order to provide such a mechanism, a team of researchers from DIPC, including Juan José Sáenz, has explored 2 a hybrid structure, one that combines a plasmonic nanoparticle with adsorbed molecules, that, when subjected to electromagnetic radiation, chirality information can be transferred through tens of angstroms. The team finds that the mechanism of transfer of chirality information from the chiral molecule to the spatially separated achiral probe molecule is mediated by the propagating chiralized plasmonic field of the nanoparticle, which behaves as the information-carrying entity.

The new model requires the explicit consideration of the full polarizability tensor, which includes both the diagonal electric and magnetic components and the off-diagonal cross polarizabilities, for an appropriate description of the possible inversion symmetry breaking at the interface.

From the resultant theory, two main conclusions emerge. First, the presence of a chiral molecule adsorbed on an irradiated plasmonic nanoparticle does lead to an inversion symmetry breaking at the molecule−nanoparticle interface that translates to the propagating electromagnetic field.

Second, the electromagnetic field that contains the response of the chiral unit is responsible for carrying the chirality information, originating from the symmetry breaking at the interface, from the chiral unit to the achiral probe.

These results are consistent with the remarkable effect observed for the first time by Blanch et al. It causes achiral molecules to behave as optically active dichroic species toward circularly polarized light, a behavior that may have profound implications in chemistry, biology, and nanophotonics, as it represents a chirality information transfer that operates over long distances, in some cases tens of nanometers. It may also pave the way to use chiral electromagnetic fields as an excitation source for photoinduced stereoselective chemical reactions.