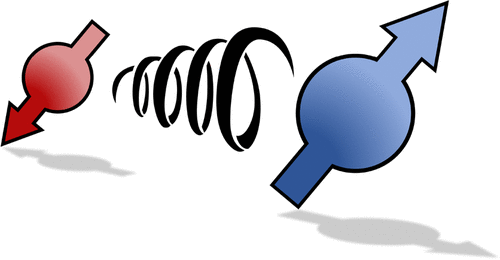 Usually, optical activity is understood as the ability some substances have to change the handedness of polarized light when it goes through them. Molecules that show optical activity have no plane of symmetry. So-called chiral matter broadly describes structures for which left- or right-handed mirror images are non-superimposable, or, equivalently, that lack improper rotation axes. The commonest case of this is in organic compounds in which a carbon atom is linked to four different groups. An atom of this type is said to be a chiral centre. Thus, molecular chirality is generally considered to be a geometrical property associated with the spatial arrangement of the nuclei in the molecule, and optical activity is understood in terms of the quantum theory of the interaction between light and electrons and molecules.

Chiral matter offers opportunities for the exquisite control of electron and spin transport due to extraordinary optical, electronic, and magnetic properties that depend on the structure’s handedness. Importantly, these properties are often observed at or near room temperature, which suggests that quantum devices based on chiral matter and fields have the potential to operate at similar practical temperatures if properly designed.

Questions about how chirality can be rationally incorporated for quantum control have been prompted by results that focus on chiral systems spanning single molecules to nanoparticles and metamaterials. In particular, by improvements in our understanding of electron spin-dependent interactions with chiral molecules, and advances in amplifying chiral light−matter interactions with nanophotonic platforms or through self-assembly.

It is exciting to ask what experimental new independent variables, in the context of quantum information processing, chirality provides in configuration, in electronic structure, and in electromagnetic radiation. These degrees of freedom may be categorized by considering an accessible experimental space that is composed of three axes built by matter, probes, and their interactions.

Chiral and achiral matter can be characterized using chiral or achiral experimental probes, the latter of which is subsequently transduced into a measurable quantity. The most obvious example of a chiral probe would be circularly polarized light. The third axis of the experimental space concerns the matter−probe interaction itself, which can be characterized by a degree of “quantumness” that either preserves or destroys coherent properties in the system under study. It remains to be seen whether the chiral character of matter and of experimental probes influence these properties.

In a recent review, a team of researchers highlight 1 the potential of leveraging chiral matter and fields for as yet untapped applications in the quantum sciences.

The researchers detail how chiral matter presents advantages for the scalability and flexibility of molecular architectures interfaced with low-dimensional materials; the operation of quantum devices at room temperature and in noisy photonic, phononic, and electronic environments; and the advance of investigations into the emergent field of quantum biology. The roles of diverse molecules, materials, and systems in which electromagnetic chiral degrees of freedom can be harnessed for spintronics and quantum information applications are reviewed.

One main conclusion is that, when chirality is introduced into measurements, it produces quantifiable effects that are detectable, for instance, in electrochemical or redox reactions and in spin-selective conduction detected by scanning probe or break junction experiments. Chiral-enhanced nanoscience will require a multidisciplinary effort combining cutting-edge materials design and characterization with diverse theoretical strategies, with the long-term goal of designing and controlling chiral (qubit) spin states that operate at room temperature. Some of the crucial developments that will be needed in the field to advance the understanding and application of chirality and quantum effects in quantum information processing, storage and transduction are also provided.

The team anticipates that materials and systems that take advantage of inherent chiralities and interactions with other quantum effects will play an important role in the next revolution in quantum devices.

How chirality information can transfer over long distances

Identifying the bottlenecks for improving quantum-dot based devices