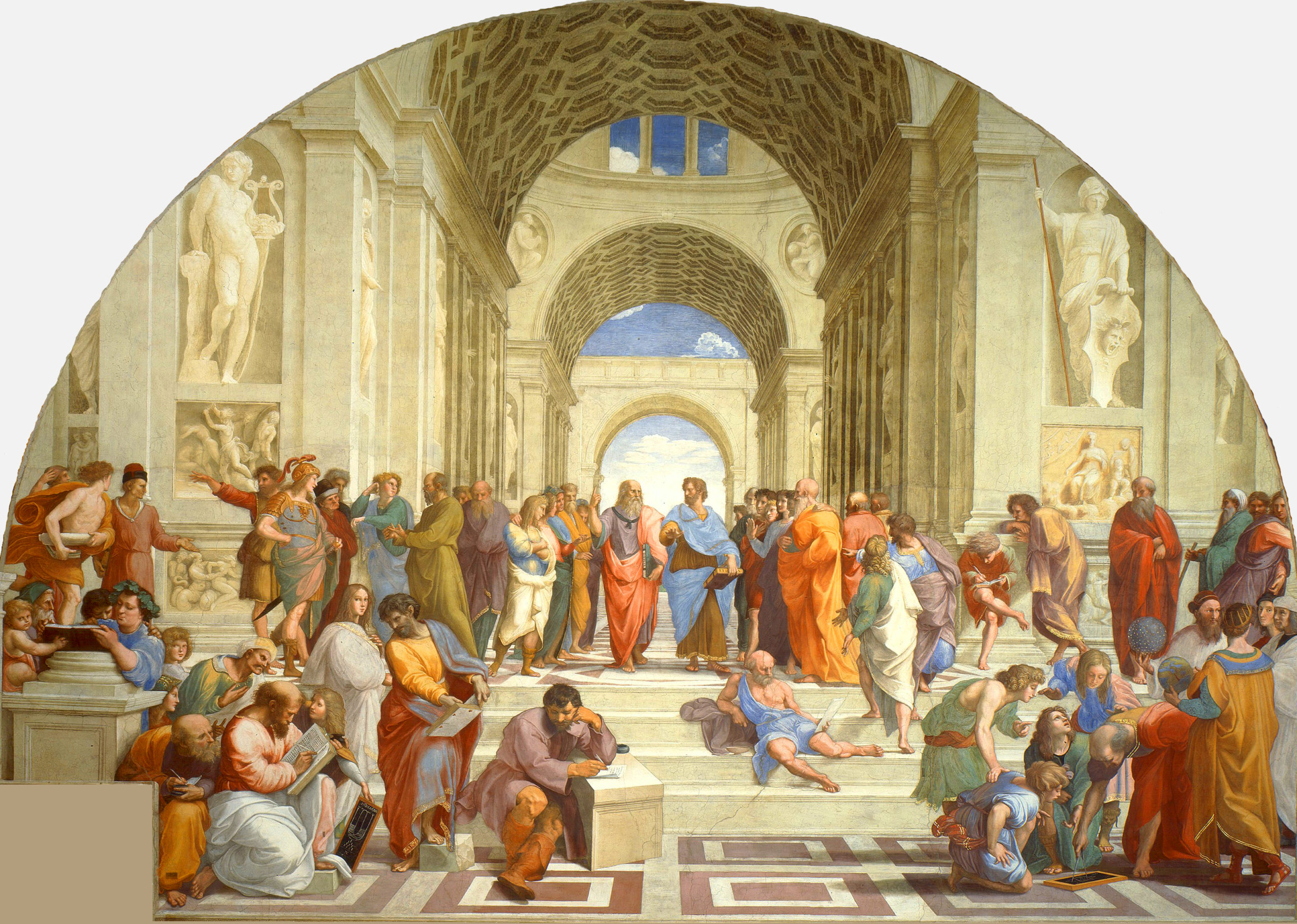 Since this will be a series of entries about something as weird as the ‘prehistory’ of philosophy of science, I think readers deserve a little explanation about what I do exactly mean by that. ‘Philosophy of science’, to begin with, is a topic that took its current status as an autonomous academic field (I mean, something about which you may hold a university chair, or found a journal exclusively devoted to it) around the beginning of the 20th century, with the ‘Vienna Circle’ of Schlick, Carnap, Neurath, etc., and their journal Erkenntnis, being their official ‘founding event’ in most mythographies. Obviously, neither were these intellectuals creating a new branch of reflection ex nihilo, nor had philosophers since the beginning of the times abstained from thinking, very deeply indeed, on topics related to ‘science’. Actually, reflection about what science is and how can we got it was what for most of those oldie philosophers philosophy was mainly about.

Current academic practice, however, tends to follow an institutional division of labour according to which most of the discussion about ‘science’ ante 1900 belonged to a different intellectual field known as ‘epistemology’ (or ‘theory of knowledge’, in spite of the Greek word epistéme meaning, precisely, science, and having been always translated into Latin as scientia). This has had the disappointing result that current ‘epistemologists’ (especially in the analytic tradition) tend to focus on cases of ‘knowledge’ whose prototypical examples would be things like ‘John knows that there are some beers in the fridge’ (something that Plato would have been horrified by someone taking it as a case of epistéme), instead of things like, say, ‘we know that matter is composed of atoms’. So, these epistemologists have nearly nothing to say about the questions philosophers of science tend to ask, a situation that is sadly parallel to the lack of interest of most philosophers of science about discussions on epistemology. (By the way, in the French philosophical world, as a proof of greater etymological bon sens, the word épistémologie has been more usually preserved to refer to what other countries called ‘philosophy of science’).

I will not attempt here to fight against the windmill of this schizophrenic situation (though some items of schizophrenic philosophy are going be prominent case studies in my series), but will remain deferentially compliant to the custom of considering philosophy of science as an enquiry about scientific knowledge in the contemporary sense of ‘scientific’, and hence, giving more relevance (in the expression in italics) to the ‘scientific’ than to the ‘knowledge’ half. So, my ‘prehistory of philosophy of science’ will basically consist in recounting what pre-contemporary philosophers would have to say about what we (not them) understand by ‘science’. My introduction demands to start, hence, by explaining the main differences between our understanding of the concept of ‘science’ and that of more ancient philosophers.

To begin with, we tend to automatically identify the word ‘science, first and foremost, with a kind of reality that consists in a social activity, an important element in our social fabric, institutionalised in the system of universities, research centres, libraries, publishers, congresses and seminars, school curricula, documentaries, and, of course, in the corpus of items of ‘knowledge’ this system helps to create, consolidate and transmit. After all, scientists, the people who do science, are, as different from ‘natural philosophers’, or from ‘philosophers’ tout court, a creation of the 19th century, the term being coined by the author who will be one of the last protagonists of our saga: William Whewell (1794-1866).

Of course, it is not that ancient philosophers simply ignored the ‘social flesh’ that was necessary to enjoy something like ‘science’: Aristotle famously -and delightedly- pondered about slavery as a necessary precondition for the existence of a happy class of wealthy, bearded people having plenty of free time (skholé in Greek, otium in Latin) to devote themselves to advanced learning. But their main philosophical concern was about the (purely intellectual) ‘nature’ of knowledge, rather than about its (social or economic) ‘nurture’, so to say. You can justly respond by pointing out that most of the ‘orthodox tradition’ in contemporary philosophy of science, from Carnap and Popper to Bas van Fraasen or Stathis Psillos, barely spend a paragraph talking about the social flesh of science (though it has been much less so in the last fifty years), but my point is not that we should identify philosophy of science with sociology of science, or something like that: I am simply telling that the object of contemporary philosophy of science, in contraposition to the object of classical epistemology, is now immediately recognised as an essentially social construction (not in the sense that it is a ‘mere’ social construction: sport is also a ‘social construction’ but that does not make of myself a tennis player as proficient as Roger Federer), rather than as something belonging to the realm of the abstract, individual mind. Even if philosophy of science (or ‘methodology’, as it is also often named) tries essentially to answer the question of ‘how to attain knowledge’, the subject of that question, the one being responsible for attaining that knowledge, is naturally seen nowadays as ‘society’, or at least as a ‘social institution’, and not as a monadic Robinson Crusoe. By the way, we already saw in this blog how Popper himself understood this.

In the second place, contemporary philosophy of science is not as obsessed (or it is not obsessed at all) as pre-contemporary philosophy was about whether scientific knowledge is ‘indubitably certain’. Actually, after Popper’s critique of verificationism, and also under the long shadow of Hume’s critique of induction, science is not usually understood (at least amongst philosophers, and usually by most scientists; since more recent times, not by a large part of the general public either) as knowledge that has been proved beyond any possible doubt. Most scientific theories and laws are seen, instead, as idealised, simplified, approximate and provisional models, always subject to improvement, if not blatantly conjectural and faute de mieux in many cases. This leads to a funny contrast between our science and the science of the times of Aristotle or Kant: we recognise the falibility and imperfectness of our scientific knowledge much more than they did with theirs, in spite of our knowing that our scientific knowledge is vastly better than theirs in basically all respects.

Lastly, and directly connected to the previous two points, we are unavoidably conscious of the colossal complexity of science, both in terms of the ‘internal’ relations between each item of knowledge and a myriad of other items, and of the ‘external’ connections between the epistemic and the practical (relations and connections that can be positive or adverse), whereas classic philosophers tended to reserve the label epistéme to the ‘purest’, most ‘intuitive’, less ‘contaminated’ forms of intellectual wisdom, the less poluted with ‘practical’ or ‘wordly’ junk, the better. We know science is less a pyramid than a mangle, to use Andrew Pickering’s metaphor.

Hence, what will this ‘prehistory of philosophy of science’ be about? In a nutshell, may aim is to illustrate how the evolution of our contemporary understanding of science can be traced through the works of some authors prior to the last hundred years, i.e., how some of their ideas can be regarded as ‘philosophy of science avant la lettre’ (even if, of course, I shall yield at times to the temptation of refashioning them a little bit, in order to make the story more lively). We shall start, of course, by the very beginning, with the oldest preserved document that can be rightly considered as a work on ‘philosophy of science’. A document that, obviously, was written by a Greek, more than two millenia ago.

Pickering, Andrew. 1995. The Mangle of Practice: Time, Agency, and Science. Chicago, The University of Chicago Press.

The ‘prehistory’ of philosophy of science (4): Thank goodness!