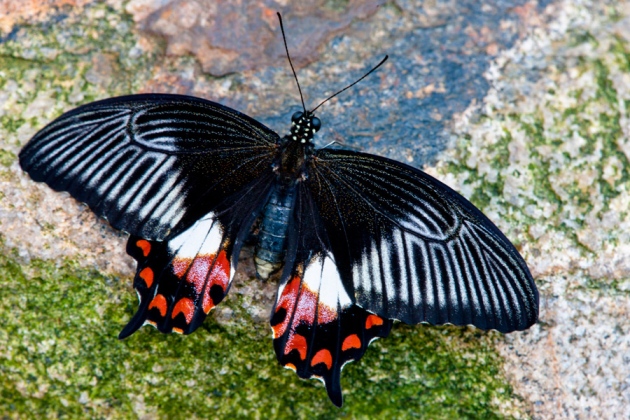 One gene can determine the wing patterns of female swallowtail butterflies, making them resemble a different, and toxic, butterfly species, according to a study published in Nature. The finding adds to the debate over mimicry and how it helps put off would-be predators. A team of evolutionary biologists at the University of Chicago sequenced the genome of crossbred swallowtail butterflies and found that a single gene, called doublesex, determined if a female’s wing pattern would mimic that of a toxic butterfly species.

Encounter with dark matter may have led to dinosaur extinction

Earth’s cyclical encounter with dark matter could have led to the extinction of dinosaurs, according to a study by Harvard University researchers. Scientists have created a model that suggests that galaxies pass through thin discs of dark matter every 35 million years, coinciding with spikes in comet impacts, in particular the comet linked to dinosaur extinction 66 million years ago. Lisa Randall, a Harvard professor involved in the study, says the timing doesn’t quite coincide with their theory, but “It comes reasonably close. It’s not a perfect fit but it’s one possibility.

University of Pennsylvania researchers have shown that altering the immune cells of 12 patients with HIV helped them resist the virus. Using a gene-editing technique called zinc-finger nuclease, they removed the T cells’ CCR5 gene, which controls a protein that lets the virus enter the cells. A month after the cells were reinfused, half the patients in the study halted antiretroviral therapy. In the four patients who were able to remain off their regimens, viral loads initially increased before falling.

Human influence on forests began much earlier than previously thought, according to a study of pollen from southeast Asia set to be published in the Journal of Archaeological Science. Researchers from Queen’s University, Belfast, found evidence of seed importation, plants grown as food sources and land clearing that goes back 11,000 years.

Three renowned scientists are forming the company Human Longevity to study age-related diseases by using genomics and stem cell research to develop therapies to lengthen the amount of time that people remain functional and healthy. “We’re hoping to make numerous new discoveries in preventive medicine. We think this will have a huge impact on changing the cost of medicine,” said Craig Venter, one of the first researchers to sequence the human genome. Joining Venter in the San Diego-based venture are stem cell researcher Robert Hariri and X Prize Foundation founder Peter Diamandis.