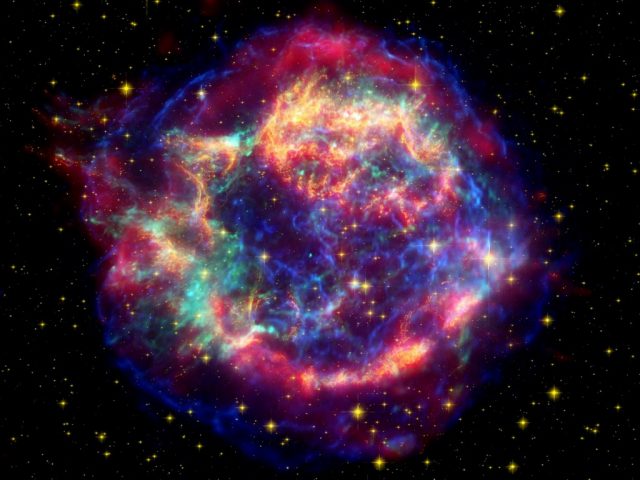 Scientists have simulated a supernova with the help of some radioactive waste and a particle accelerator at CERN. Researchers took leftover irradiated scraps of metal containing titanium-44, which is made naturally by supernovae, to produce a beam and sent it into a chamber filled with helium to see how quickly the titanium-44 would be destroyed.

Tracks of one dinosaur chasing another have been digitally restored using blocks preserved from an ancient riverbed and photos of blocks that were missing. The reconstruction shows tracks of a carnivorous theropod, a top predator, following a herbivorous sauropod that were left more than 110 million years ago in a riverbed in what is now Texas.

Chile quake may be part of pattern of powerful temblors

The massive earthquake that hit Chile on Tuesday may be part of a larger pattern of temblors magnitude 8 and higher that have struck around the world in the past decade, but efforts to connect them scientifically are hampered by a lack of proper equipment, some experts say. There have been 17 major quakes with magnitudes of 8 or more since 2004, or 1.8 per year, almost three times the rate in the 20th century.

The U.S. Navy is developing human-sized robots for specific tasks related to fighting fires aboard ships. The machines can turn valves, drag and aim fire hoses and even search for people needing rescue. The robots are intended to work with human firefighters but should be “able to withstand higher heat for longer periods.”

Was Black Death airborne and not spread by rat fleas?

Rat fleas may not have caused the spread of the Black Death in Britain and Europe during the mid-14th century, but that the highly contagious illness had to have been airborne to spread so swiftly. Scientists at Public Health England say the speed at which the plague spread indicates that it was spread by coughing and sneezing, meaning the plague was pneumonic and not bubonic.