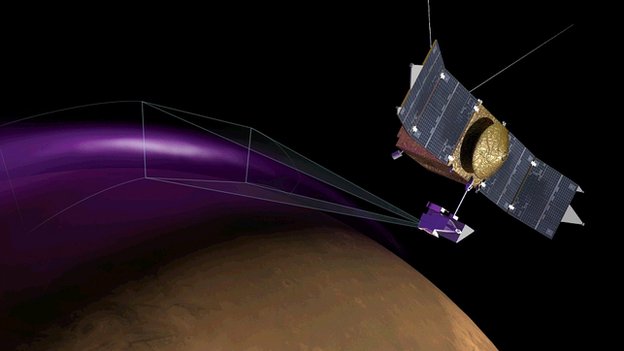 NASA’s Maven spacecraft spotted a strange aurora that lasted for five days and stretched deep into Mars’ northern atmosphere. Auroras on Mars have been observed previously, but scientists were intrigued by the depth of this one. In addition, Maven detected an unexpected high-altitude dust cloud.

Scientists have re-created the vastly different orbit of the moon in its early days, showing what its lunar phases would have looked like. Back then, the moon’s orbit was extremely elliptical, resulting in a lunar cycle that had a full moon occurring every day and a half.

A new technique for gene engineering that allows an altered gene to spread on its own through a population of fruit flies has been developed by scientists at the University of California at San Diego. The study describing the technique, published online in Science, is stirring debate because it doesn’t address methods to limit the spread of mutations that may not have been intended. However, the technique shows promise in creating a population of mosquitoes that could be bred for malaria resistance.

Scientists used high energy X-rays to determine that famed painter Pablo Picasso used common household paint rather than oils that were typically used by artists of his era, according to findings presented at the APS March Meeting. Art historians had long debated the house paint-oil paint question.

A delicate mineral managed to survive when the meteor on which it was riding crashed into Earth about 15,000 years ago, and now scientists are puzzling over how a quasicrystal could form on a meteorite that’s the same age as our solar system, before Earth came to be. “They would be part of the building blocks of the solar system, including planets and asteroids. Yet, we did not know before now that these quasicrystals were part of that story and we do not understand yet how they formed,” said physicist Paul Steinhardt, co-author of the study published online in Scientific Reports