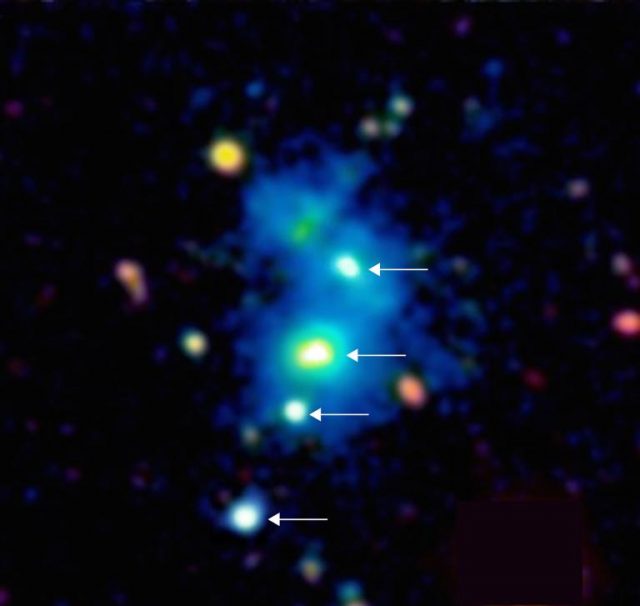 A extremely rare set of 4 quasars
Astronomers have spotted an extremely rare grouping of four quasars within about 650,000 light-years of space. The odds against finding four so close together are 10 million to one. The rare quartet exists in an unusually bright nebula that has scientists scratching their heads as well.

The Fermi Gamma-ray Space Telescope may have detected gamma rays that could offer some clues about a magnetic field that came to be just after the Big Bang that could indicate why matter outnumbers antimatter in the universe.

Fruit flies exhibit a fearlike response. Researchers put fruit flies into a container with food, then repeatedly passed a shadow over the food as the flies approached, causing them to retreat. “When a fly responds to a visual threat, it isn’t just a robotic reflex; there is some sort of internal state that develops,” said biologist one of the authors.

Rats work to rescue their comrades in peril, and do so even faster if they’ve experienced the same threat themselves. When researchers put rats into chambers connected to another enclosure with a rat struggling in a pool of water, the dry rat would aid the other by helping it through an opening, and it would do it even faster if it had been in a similar situation.

10,000-year-old Antarctic ice shelf may break up by end of decade

What’s left of the 10,000-year-old Larsen B Ice Shelf in Antarctica will likely be nothing but hundreds of icebergs by 2020, according to NASA scientists.