“We asked for workers. We got people instead.” 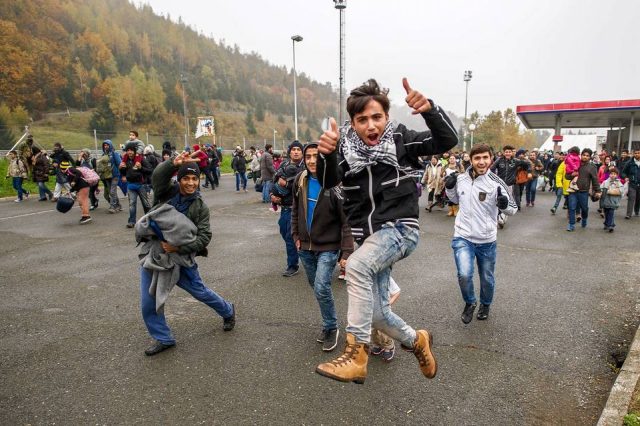 In a past article, I reviewed the recent literature on the effects of immigration on the labor market. To sum up, it finds no significant negative effects on employment or wages of native workers while it boosts the local economy. From here, one may be tempting to conclude that the removal of worldwide immigration restrictions would induce a very large increase in world Gross Domestic Product (GDP). However, one thing is to say that, given the actual state of restriction to movements among countries, a flux of immigrants is beneficial, and another very different thing is to say that, should all restrictions be removed, the benefits would multiply accordingly. Economically, this is equivalent to taking the marginal effect for the total effect. A mathematician could understand this as the error one makes when approximating the value of a curve using the tangent, an error that may be small for small changes, but that may very big when extrapolating to points far in the domain.

Borjas (2015) 1 takes a look at the models that predict, as a popular metaphor says, that there are “trillion-dollar bills” lying on the sidewalk, ready for the taking, if only the receiving countries would remove the self-imposed migration barriers (see, for instance, Clemens, 2011 2). The simplest model can be described as follows. In rich countries, demand for labor is high, which means that wages are higher than in poor countries. If there were no restrictions to immigration, workers would move from poor to richer countries. As they move, the wages in the rich countries would decrease while that of poor countries would increase. Immigration would stop when the wages are equalized in all countries. A few assumptions on the production functions of the countries allows for a specification of the demand curves for labor, whose parameters can be estimated, and the model calibrated to simulate the economies and to make counterfactual exercises. Using World Bank data for the year 2011, the estimation is that the GDP of the world would go from

110 trillion, almost a 60 percent increase. This increase in production is due to 2.6 billion workers moving from low productivity economies to high productivity ones. This is a 95 percent of the total workforce of poor countries. Another consequence is that native workers in the rich countries would lose 40 percent of their salaries, that workers in the poor countries and immigrant workers would gain a 143 percent increase, and capitalists would see an increase of 57 percent in their income.

Of course, the model is very simplistic, but it already highlights a couple of problems with even more refined models: for increments of GDP in the trillions figure to be true, a movement of billions of people is necessary (more so if workers move with their families). The seminal work in this area, Hamilton and Whalley (1984) 3, for instance, spends a great deal of time poring over detailed estimates of the dollar gains, but neglects to report the number of migrants required to achieve those gains at any point in the study. The other problem that the model shows is the fact that there will be losers in the rich countries that would oppose the opening of the border.

In order to make the model more realistic and more reliable, a number of changes can be done. For instance, one may want to take into account the costs of moving. A worker will move when the present value of all future increases in wages in the rich country is greater than the cost of moving. It is easy to compute the monetary costs of moving, but to compute other costs (like the cost of leaving the home culture, friends, and family) is trickier. Still, one may use some real life cases of open borders to have an estimate. For instance, Puerto Ricans can move freely to the United States, where they can expect to earn twice as much even after taking into account the higher prices in the US. Since we know how many Puerto Ricans move and how much they earn in both places, we can estimate the cost of moving. This and other worldwide cases support a rough estimate of moving costs around ten times the annual wage. When entering this number in the model, the gains from open borders and the number of workers moving decrease, but not by much.

At this point, two questions are salient. First: if there is so much potential gain from free immigration, why is it the case that no country has collected the huge benefits? Second: is there a reason to think that those trillions of dollars may not be there after all? Borjas (2015) uses still a more complete version of the model to argue that the answer to the second question may be positive, providing at the same time an explanation for the first one. It is important to recall that Borjas does not think that this more complete model is a good model to make an estimate of the potential gains from open borders, rather it is there to make the point that taking into account more variables may change the conclusions drastically. Whether the model presents a good simulation of this reality or there is a better one is something is something we do not know yet. The model only serves the purpose of illustrating the lack of support for the trillion-dollars-gain hypothesis. The variable that Borjas adds is in line with the theories of the importance of economic institutions in Acemoglu and Robinson (2012) 4, and tries to address new concerns not mentioned in the previous literature: how many persons would move? What would economic conditions in the new borderless world look like? What would happen to the institutions and social norms that govern economic exchanges in specific countries after the entry/exit of perhaps hundreds of millions of people? Would the institutions that presumably led to efficient exchanges in the richer countries remain dominant and spread throughout the globe, or would these institutions be replaced by the political and cultural inefficiencies that may have hampered growth in the poorer countries?

The idea is as follows. If one million immigrants enter a country of 10 million, these immigrants may adjust to the economic institutions of their new country, but if 20 million immigrants come, they may bring their own economic institutions, the very ones that made them poor in their country of origin. Borjas adds a variable that reflects the combination of domestic and imported institutions as the number of immigrant changes and shows how it drastically changes the results, to the point of making the potential gains almost negligible. The mathematical analogy would be that the first simplistic model used a partial derivative at a point x to estimate the value of the function at point y when point y is not only far from x, but it is not even in the direction of the partial derivative.

Gold Open Access Journals: From scientists’ “publish or perish” to publishers’ “publish to get rich”