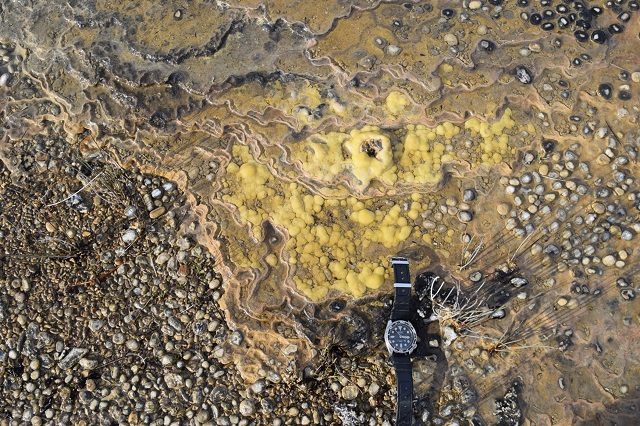 Microbial mats of living stromatolites, which first appeared on Earth at least 3.5 billion years ago but are very rare now, have been found in a remote wetland area of Tasmania. Researchers were surprised to find the stromatolites thriving in a freshwater environment since most stromatolite communities are found in saltier water.

Nearby pulsars ruled out as source of positrons rushing by Earth

Positrons that flow by Earth in unusually large numbers don’t come from nearby pulsars Geminga and PSR B0565+14, according to measurements gathered using the High-Altitude Water Cherenkov Gamma-ray Observatory. The findings could strengthen the case for dark matter, which some researchers believe is behind the abundance of positrons.

Lack of genetic diversity may have led to passenger pigeons’ extinction

A lack of genetic diversity may have played a role in the extinction of North America’s passenger pigeons. The birds once thrived in massive numbers, but especially strong natural selection due to that lack of genetic diversity may have made it difficult for them to cope when their numbers started to drop after Europeans first came to North America.

Forebrain organoids may help in study of Zika virus

Scientists have created forebrain organoids, which they say can help in the study of how the Zika virus works. The forebrain organoid mimics what a developing human brain might be like during early days from conception to early pregnancy, and when researchers exposed it to Zika, the virus affected the growth of radial glial cells.

Concerns about CRISPR gene drives in the wild

CRISPR gene drives may be too strong to be used in the wild to cut back populations of invasive species. The fear is that altered genes might accidentally spread to other territories with unknown consequences.