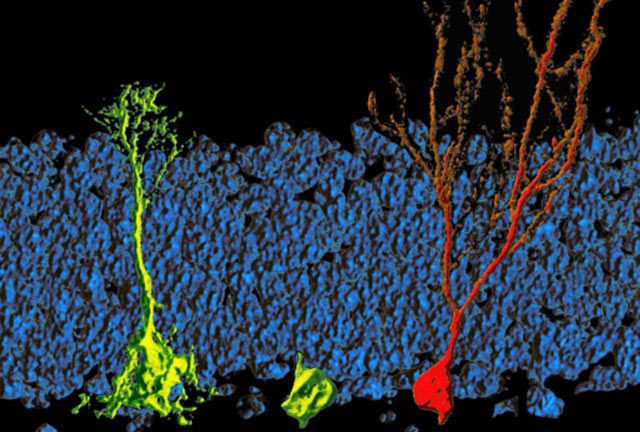 In 1928, Santiago Ramón y Cajal, the founder of modern neuroscience, wrote that the brains of adult humans never make new neurons. “Once development was ended,” he proclaimed, “the founts of growth and regeneration … dried up irrevocably. In the adult centers the nerve paths are something fixed, ended and immutable. Everything must die, nothing may be regenerated.”

Since Cajal’s time, new research has partially corrected him—something very infrequent—, demonstrating that the central nervous system has a powerful plasticity and few things are “fixed, ended and immutable” even on the adult brain.

Neurogenesis, a process of generating functional neurons from precursors, was classically considered to occur only during embryonic and perinatal stages in mammals. However, Joseph Altman’s pioneered studies in the 1960s, although severely criticized on his time, provided the first anatomical evidence for the presence of newly generated dentate granule cells in the postnatal rat hippocampus. Functional integration of new neurons in the adult central nervous system was first shown in songbirds by Federico Nottebohm, who demonstrated that it was necessary for the development of the most elaborated patterns. The field of adult neurogenesis was helped by i) the introduction of bromodeoxyuridine, a nucleotide analog as a lineage tracer, ii) the identification of multipotent neural stem cells in the adult mammalian brain, and iii) demonstrations of life-long continuous neurogenesis in almost all mammals examined1.

Active adult neurogenesis is spatially restricted under normal conditions to specific “neurogenic” brain regions 2, the subgranular zone in the dentate gyrus of the hippocampus where new dentate granule cells are generated, the subventricular zone of the lateral ventricles where new neurons are generated and then migrate through the rostral migratory stream to the olfactory bulb to become interneurons, and with less evidence, the cerebral cortex. But in humans, the stream of olfactory neurons is finite: It’s there in infants, but not longer present in adults. The same is true for the frontal lobe—the front-most part of the brain that governs our most important mental abilities. Floods of fresh neurons migrate there during early childhood but they stop as we mature. The hippocampal formation, which includes the dentate gyrus, was the most important location, since its neurogenesis in rodents is particularly abundant and is the best studied but the situation was unclear. 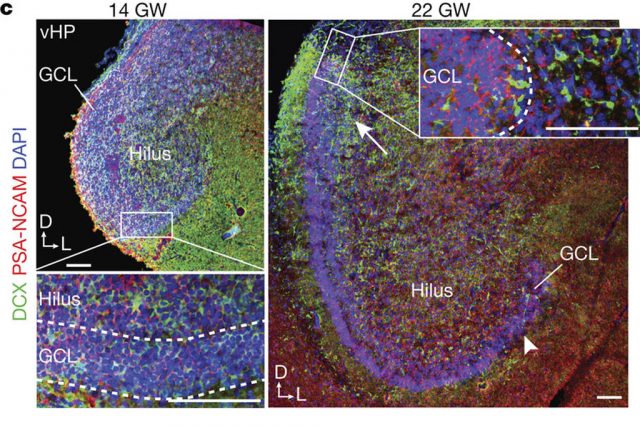 There is a controversy about whether adult neurogenesis is also present in the human hipocampal formation. The first evidence of neurogenesis in adult humans came in 1998 from the brains of deceased cancer patients who had received injections of bromodeoxyuridine while they were still alive. The analog incorporates in newly formed DNA and therefore labels newly divided cells, and in the brain, it showed up in some neurons in the hippocampal formation. In 2013, Jonas Frisén at the Karolinska Institute in Stockholm buttressed the case by carbon dating individual neurons in brain tissue from 55 deceased people. From the cells’ ages, the group calculated that every day, humans replace 700 of their neurons in the dentate gyrus, a part of the hipocampal formation 3. Other studies find many fewer putative new neurons. 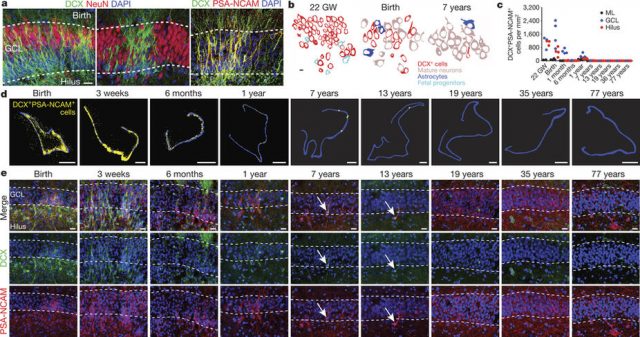 A recent article by Shawn F. Sorrels and coworkers, from the group of Arturo Álvarez-Buylla in the University of California San Francisco, has found a defined population of progenitor cells in the subgranular zone of the dentate gyrus during human fetal and postnatal development. The authors used 59 post-mortem and post-operative samples of the human hippocampus. The studied human brains ranged from 14 gestational weeks to 77 years of age. 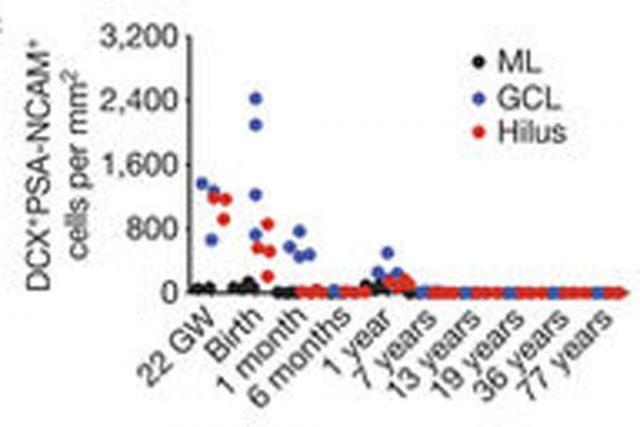 The group of Álvarez-Buylla also studied non human primates. In the monkey (Macaca mulatta) hippocampal formation, proliferation of neurons in the subgranular zone of the dentate gyrus was found in early postnatal life, but this diminished during juvenile development as neurogenesis decreased, in a pattern mimicking the human observations. Their conclusion was that recruitment of young neurons to the primate hippocampus decreases rapidly during the first years of life, and that neurogenesis in the dentate gyrus does not continue, or is extremely rare, in adult humans.

Science, the main competitor of Nature, the journal where the article by Sorrels and coworkers was published, has suggested some doubts about this paper in its web page (see ref. 3). According to them, the way the tissue was handled, the deceased patients’ psychiatric history, the fact that labeled proteins could degrade after death or whether the patients had brain inflammation could all explain why the researchers failed to confirm earlier, encouraging studies. However, Álvarez-Buylla and his group have the best reputation for the study of adult neurogenesis, the techniques for the study of human nervous tissue were adequate, the number of cases is enough, and they also analyzed samples from 22 living patients—twelve adults, seven children, and three infants—whose dentate gyruses were surgically resected in an attempt to treat severe epilepsy. These brains were most certainly not postmortem, and they did not show adult neurogenesis either. Moreover, no neurogenesis was found in the adult monkeys and crucially, they succeeded in finding neurogenesis in infant and fetal brains. It’s not that their techniques did not detect anything; it is more that there is nothing to detect in adults. This article is also a good example that negative results (no adult neurogenesis) are also important and can be published in the best journals.

Adult neurogenesis has been linked to learning and memory, stress and exercise, and is thought to be altered in neurological diseases. On the other hand, boosting neurogenesis, researchers speculate, might prevent or treat depression, Alzheimer’s disease, and other brain disorders. This article throws cold water on two important topics. First, the importance of neurogenesis on learning and memory. If we really don’t make any new neurons as adults, how do we learn new things? And second, the possibility to encourage neurogenesis to treat stroke or neurodegenerative diseases. As Alvarez-Buylla said “If it isn’t there to begin with, how might you induce it?” 4. Finally, it seems that Cajal, as usual, wins the match.

A common formation mechanism for star clusters over all mass scales