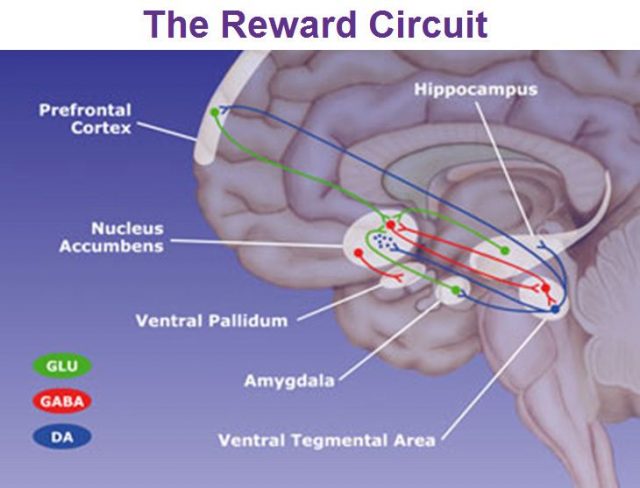 The reward pathway is a group of brain structures connected to each other that are key in the processes of motivation (desire, motivation, craving), associative learning (operant reinforcement and positive conditioning) and in positive emotions, particularly those in which pleasure has a fundamental component such as joy, euphoria and ecstasy. The reward is an attractive and motivational property generated by a stimulus that in turn sets in motion an appetite, an approach behavior and a consummatory behavior.

Primary rewards are aspects that generate a sense of wellbeing in the face of a behavior that is normally useful and necessary for the survival of the individual and/or the species, such as food, drink, sex or parental-care, while there are extrinsic rewards such as money or watch our favorite team win that are attractive and desirable, but that do not have a pleasing component in themselves. There are other more sophisticated aspects that stimulate the reward circuit and generate that feeling of pleasure; among them is to make a decision, solve a problem, help a stranger or feel part of a group.

Children with autism spectrum disorder show less interest and attraction for social stimuli, have a lower tendency to participate in social activities in collaboration with other children, have a deficit in reciprocal social interaction and find social situations less pleasant than children of the same age and intelligence quotient who do not have autism. 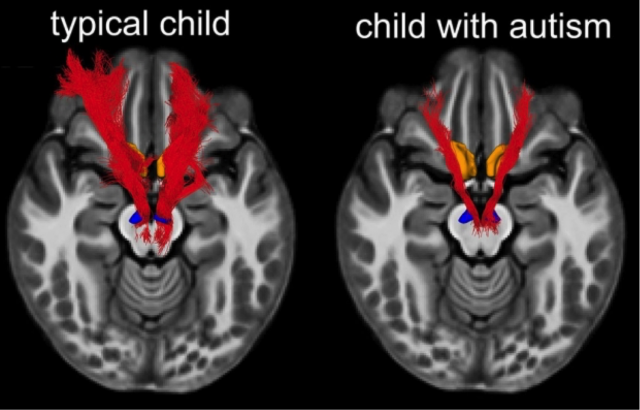 Children with autism spectrum disorder (ASD) have morphological and functional alterations in their brain connections. Studies in animal models of autism have implicated the mesolimbic pathway of reward in search behavior and social reinforcement but so far there was no direct evidence in humans. This pathway connects the ventral tegmental area with the hippocampus, amygdala, nucleus accumbens and prefrontal cortex. It is known that this dopaminergic path modulates the responses of behavior to stimuli of emotional gratification and motivation. It is the cerebral mechanism that mediates the reward, the substrate of this process of cerebral pleasure. In fact, damaging the mesolimbic pathway in mice reduces their social behavior, but there was no direct evidence of how strong was the link between people’s social skills and the correct structure and functioning of the mesolimbic reward circuit. In humans, functional magnetic resonance imaging studies had seen activation of the nucleus accumbens during the processing of social stimuli in neurotypical adults and that activation of nucleus accumbens was reduced in both children and adults with ASD 1.

A study by the Stanford University School of Medicine published in the journal Brain has found differences in the mesolimbic reward system of children with autism2. The researchers identified in a reliable manner the fascicles of white matter that connect the nucleus accumbens and the ventral tegmental area (two regions that respond to social stimuli and regulate social motivation in animals) and found reproducible evidence in different cases of structural aberrations in these tracts in children with ASD. They further demonstrated that structural aberrations were accompanied by aberrant functional interactions between these two reward circuit areas in response to social stimuli. Finally, they demonstrated that both structural and functional alterations were related to measures of anomalies in social interaction recorded by parents in affected children. Therefore, the level of abnormality in this brain path predicted the degree of social difficulty of each child.

These results support the so-called theory of social motivation of autism, according to which social interaction is inherently less interesting for people who have this disorder. The results were somewhat surprising because we all considered social cognition as a complex process and, nevertheless, we could relate deficits in social skills to changes in a simple and relatively primitive circuit, a straightforward and direct relationship.

A cerebral difference in this route, caused by a genetic difference and an anomalous prenatal development, can set in motion a vicious circle in which the children find it more difficult, or more uncomfortable or do not experience that feeling of reward in the first contacts social, which will retract, doing less interpersonal exchanges and moving away from those social interactions that are fundamental in our society. In addition, the brain structures are very connected with others and the connections that are not used much end up being eliminated in a process of neuronal plasticity. This can cause that initial loss of social skills to generate a cascade process that affects other regions, from there to other functions and from there to other behaviors. For example, the development of communication skills and social interaction, children have to interact with other people, that takes what is known as the theory of mind, the ability to infer the thoughts and feelings of others. It is a key process of sociability and empathy. Other possible altered aspects are the processing of faces and voices. Understanding this process suggests that we should exercise that reward system as soon as possible. 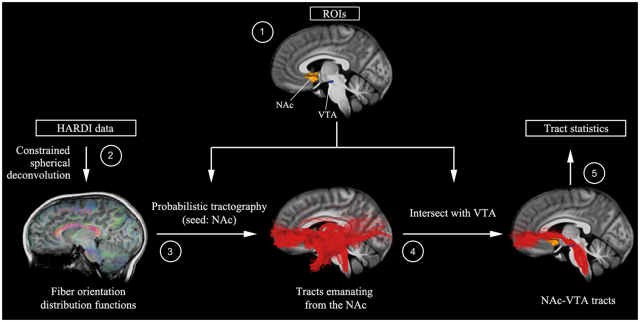 This study establishes an interesting parallelism between the previous results in animal models of autism and the data obtained in human beings. In addition, this discovery opens the door to a future line of research on therapeutic strategies in autism. There are already some effective treatments that use various types of reward to encourage children to participate in a social interaction. An obvious question would be to verify whether the exercise of these social skills, with a reward that is not internal, from the brain itself, but external, from the treatment model, corrects the structural and functional alterations observed in the reward circuits. The next thing will be to see if the same brain changes, both structural and functional, can be detected in younger children with ASD.