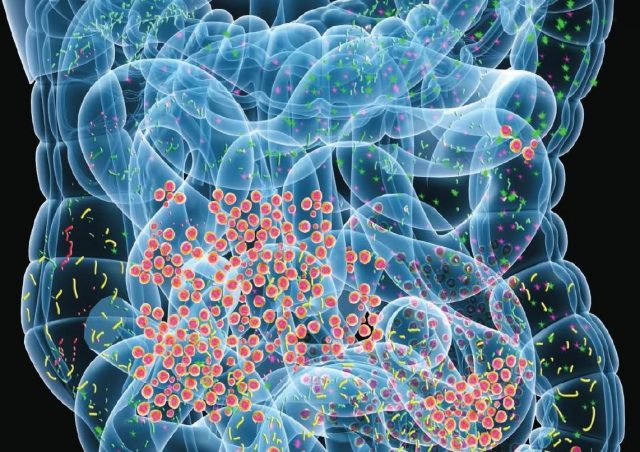 Gut microbiota has a surprising importance in processes related to the development of the nervous system, its functioning and to psychology and behavior, both in people and in animals. The microorganisms produce substances that after crossing the intestinal epithelium reach the blood and through it and after crossing the blood-brain barrier they reach the brain. In turn, the nervous system itself can also act on intestinal bacteria, modulating their composition and growth. The communication between the microbiota and the brain is believed to be therefore bidirectional and that the nervous, endocrine and immune systems are involved in it. Among the mediators of the microbiota-gut-brain communication are short chain fatty acids, such as butyrate; neurotransmitters, such as serotonin and GABA; hormones, such as cortisol, and modulators of the immune system, such as quinolinic acid.

Much of what we know about microbiota and brain is based on studies that show a correlation between specific species of bacteria, their metabolites and nervous processes that may be associated with normal aspects of brain function such as memory, effects on behavior, such as social interactions and different disorders such as neurodegenerative diseases or depression. 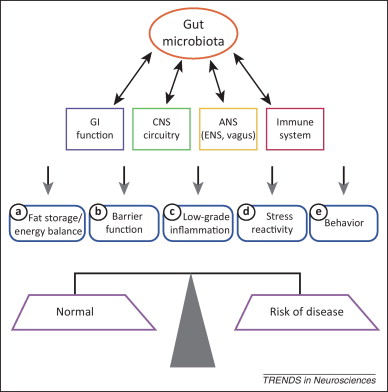 The gut microbiota can produce or stimulate the production of neurotransmitters and neuroactive products including serotonin, GABA and dopamine and these compounds, when produced by the nervous system, can, in turn, modulate the growth of bacteria. The relationship between microbiota and depression has already been raised previously. 1 Alterations in the composition of the microbiota, including species present and relative abundance, could contribute to depression, and second, depressive states could induce the modification of specific species of the intestinal microbiota and, eventually, contribute to make depression more severe. The viability of both sequences is supported by preclinical trials. For example, research in rodents has shown an onset of depressive behavior after faecal transplants from patients with major depression. On the other hand, the induction of stress and depressive behavior in rodents reduces the richness and diversity of the gut microbiota.

Studies with animal models have the advantage that many variables can be controlled and several treatments can be tried without great problem and, on the other hand, the disadvantage that sometimes the similarity with human disorders is relative. Human studies, on the other hand, have the disadvantage that they are often based on very few people and that there may be influence of the diet, of recent events, such as an infection that required the use of antibiotics or being conditioned by the presence of specific drugs such as antidepressants, which can act on the microbiota.

Valles-Colomer and her team have published a study in Nature Microbiology 2 where some of these problems are addressed. The authors used DNA sequencing to analyze the microbiota in the feces of 1,054 people. The research team correlated the different microbial taxa with indicators of the quality of life and levels of depression of the volunteers participating in the study, using surveys of the participants themselves and diagnoses provided by their doctors. The data were subsequently validated in an independent cohort formed by another 1,063 people. Finally, they used data mining to generate a catalog describing the capacity of specific components of the microbiota to produce or degrade molecules that can interact with the nervous system. 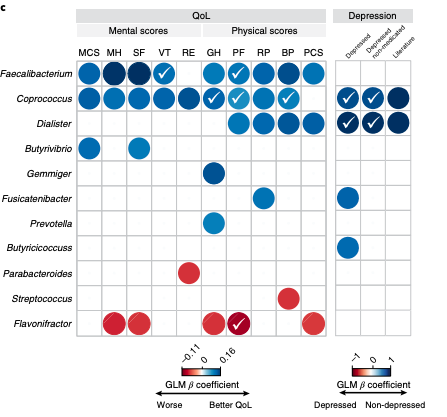 The researchers found that two genera of bacteria, Coprococcus and Dialister were reduced in the microbiota of depressed people, even after excluding the possible effects of antidepressant drugs, while the proportion of Flavonifractor had increased in patients with major depression and Butyricoccus was associated with treatment with antidepressants. Faecalibacterium and Coprococcus bacteria, producers of butyrate, which strengthens the epithelial barrier of the intestine and reduces intestinal inflammation, were associated in a consistent manner with a higher quality of life, whereas Flavonifractor presented a negative association with physical functioning. They also saw a positive correlation between the quality of life and the potential ability of the gut microbiota to synthesize a degradation product of dopamine, 3,4-dihydroxyphenylacetic acid. Finally, enterotype 2 of Bacteroides was more associated than others to mental illness and low quality of life and may indicate a dysbiotic nature, a microorganism capable of causing alterations in the human host.

The authors also analyzed metabolic pathways that transform molecules that have the potential to interact with the nervous system of human beings. They found 56 intestine-brain modules, each corresponding to the production or degradation of a neuroactive compound. Some of these routes were ubiquitous, for example the synthesis of S-adenosylmethionine or the degradation of the neurotoxin quinolinic acid, but other 14 were rarely observed, including those dedicated to the synthesis of dopamine, acetylcholine, kynurenine, histamine and serotonin II.

Serotonin can be a good example and also seems to be a key player in depression. In humans, this transmitter is in the highest concentration in the gastrointestinal tract where it participates in secretion, motility and pain perception. Intestinal microorganisms do two things: modulate the serotonin biosynthesis in the host and produce serotonin themselves.

Some of these brain-gut modules were associated with depression. For example, degradation I of glutamate and synthesis III of GABA were respectively decreased and increased in depressed volunteers. GABA is the main inhibitory neurotransmitter in the brain and alterations in GABA signaling are linked to anxiety and depression. Patients with major depression have more GABA in their blood than controls, which would fit with that increase in synthesis by the intestinal microbiota. For its part, glutamate acts as an excitatory neurotransmitter in the brain and people with depression have higher blood levels than controls, which would also fit with a decrease in their degradation.

This study provides the clearest results so far on whether a person’s microbiota can be responsible for the development and evolution of a depression. However, we must remember that the observed are correlations, two things (depression and changes in the microbiota) that seem to evolve in parallel, but that does not imply a cause-effect relationship. This study also opens many possibilities for the future: Dialister and Coprococcus can be psychobiotics, living organisms that ingested in adequate amounts, confer benefits to patients suffering from depression. The study of their metabolism and reproduction through these intestine-brain modules can provide new therapeutic targets, new hopes of better treatments for major depression.