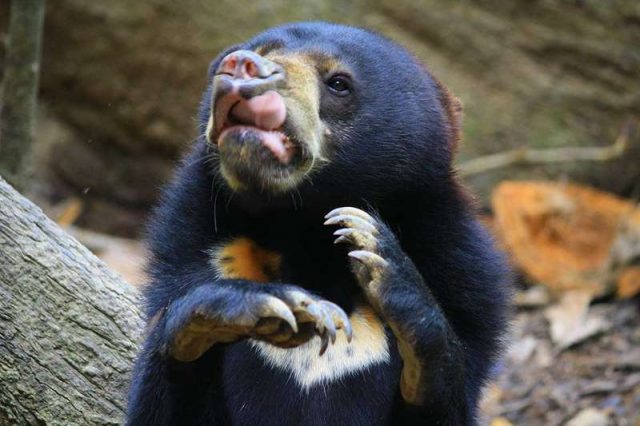 Sun bears communicate by mimicking each other’s facial expressions, a practice long thought to occur only in species with complex social systems. “Other primates and dogs are known to mimic each other, but only great apes and humans were previously known to show such complexity in their facial mimicry,” said study co-author Marina Davila-Ross.

A healthy baby monkey has been born using sperm developed from frozen immature testicular tissue in a procedure that may one day help prepubescent boys whose future fertility is compromised by cancer treatments. Researchers removed testicular tissue from rhesus macaques that hadn’t yet reached sexual maturity, froze it and then grafted it back when the monkeys had matured, resulting in viable sperm recovered up to 12 months later.

CO in exoplanet atmospheres could suggest presence of alien life

An abundance of carbon monoxide in an exoplanet’s atmosphere could indicate the presence of life, much like there was on Earth 3 billion years ago, when there wasn’t much oxygen but microbial life thrived. “Given the different astrophysical context for these planets, we should not be surprised to find microbial biospheres promoting high levels of carbon monoxide,” said Edward Schwieterman, the study’s lead author.

Chinese researchers have uncovered more than 4,300 well-preserved fossils at a site along the Danshui River in China that dates back 518 million years. The fossils include many organisms never seen before.

Genetic databases aren’t ethnically diverse, with most participants in genome-wide association studies being of European descent. The NIH All of Us program and private DNA database companies such as 23andMe are working to diversify the data available by increasing the number of participants from under-represented groups.