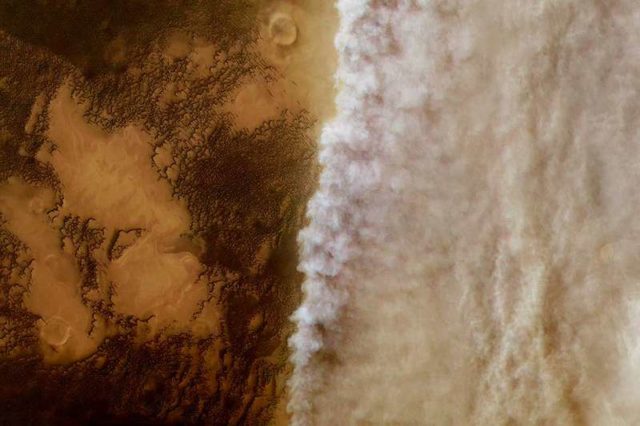 The ExoMars Trace Gas Orbiter’s observations of the massive dust storm that enveloped Mars last year may help researchers learn more about what happened to the planet’s water. Understanding how such atmospheric events form could provide clues about the history of water on Mars, says Ann Carine Vandaele, a study author.

Men who ate primarily animal protein over plant-based protein had a 23% higher risk of death over 20 years than those who had more balanced protein sources. Higher overall consumption of dietary protein was linked to a greater risk of death among men with type 2 diabetes, cardiovascular disease or cancer.

Human species dating back at least 50,000 years found in Philippines

Evidence of a new human species that appears to date back at least 50,000 years has been found at Callao Cave on the island of Luzon in the Philippines. The findings related to Homo luzonensis include teeth and a toe bone.

Liquid metal may have flowed from volcanoes on metallic asteroids

Measles outbreak in US appears poised to break record

The number of measles cases in the US is on track to rise to the highest level since the disease was declared eradicated in 2000, according to data released by the CDC. There were 465 cases reported as of the beginning of April, moving toward overtaking the 2014 record of 667 cases in the whole year.