Myelin is a lipid-rich substance that surrounds the axons of the neurons, which would be like the “wires” of the nervous system. This fatty structure serves to insulate the axons and to increase the speed with which electrical impulses, the so-called action potentials, pass along the axon. The myelinated axon can be compared to an electrical wire (the axon) with an insulating material (the myelin) around it. However, unlike the plastic sheath of an electrical cable, the myelin does not form a single long sheath over the entire length of the axon. Instead, each myelin sheath isolates the axon in one section, and in general, each axon comprises multiple sections of myelin separated from each other by short myelin-free spaces called Ranvier’s nodes. 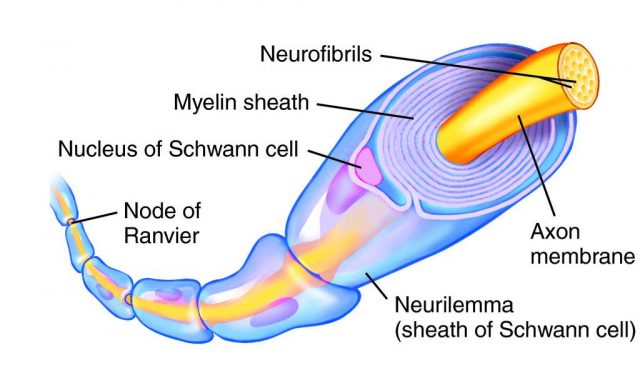 In the central nervous system myelin is formed and organized by cells called oligodendrocytes and in the peripheral nervous system (PNS) by other glial cells called Schwann cells. Insufficient myelinization, probably caused by a lack of mature oligodendrocytes, is related to autism spectrum disorder (ASD), according to a study published in Nature Neuroscience 1 that has analyzed mice and human tissue from autopsies.

Too little myelin leaves neurons vulnerable to damage, as in multiple sclerosis, while too much can alter the message transmitted by the axons. Previous research has shown that the myelin sheath is typically thinner in people with autism spectrum disorder (ASD). That earlier study compared 14 people with autism and 14 other similarly aged controls -28 years on average- and IQs -without intellectual disability-, and used a technique that allows for non-invasive measurement of myelin in living brains. The method, used to evaluate multiple sclerosis, measures the volume of water trapped between the layers of the myelin sheath (“myelin water fraction”) and compares it to the water content in other parts of the brain. A low volume of water in the myelin compared to other brain water indicates a lack of myelin. People with autism had a lower myelin water fraction and those with greater difficulties in social interaction, more severe autism, had the lowest levels of all. The areas where the differences were most apparent, including thalamic projections, the cerebellum and cingulate cortex had previously been associated with ASD, but this study 2 indicated for the first time that myelin was altered in these regions.

The study published in 2020 (1) explores the origin of the problem. ASD are genetically heterogeneous but people suffering from them show similar behavior, which is known as convergent symptomatology, so it is possible that alterations occur at different points in the same molecular pathways in the brain.

The researchers analyzed the brains of five strains of mice used as animal models of Pitt-Hopkins syndrome, a genetic disorder related to autism. The characteristics of this syndrome are developmental delay, language acquisition difficulties, motor learning deficits and gastrointestinal abnormalities. The research team was looking for the genetic mutations that cause this syndromic autism and observed an irregular myelinization and an inconsistent expression of Tcf4, a gene, that of transcription factor 4, which regulates the activity of oligodendrocytes. They also saw different genes with differential expression, i.e. they were expressed more or less in ASD model mice than in controls. They also found that in two other murine ASD models (Ptenm3m4, Mecp2KO) a significant enrichment of genes involved in myelination was observed. 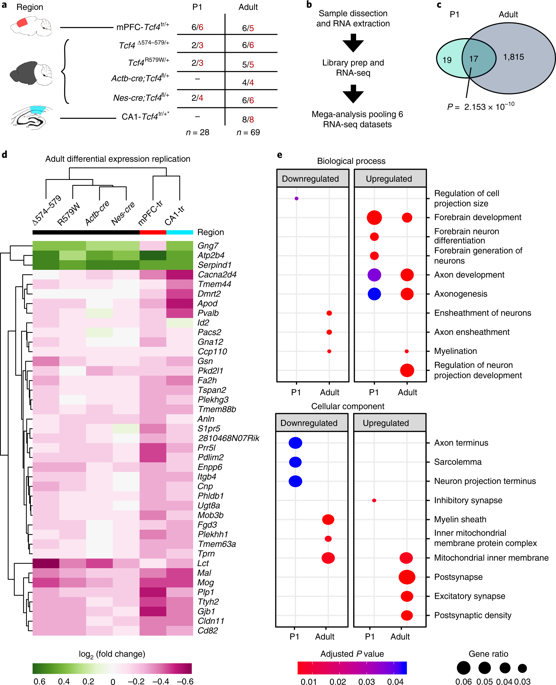 Turning their attention to human tissue, the researchers found deficiencies in the myelin lining of the brains of people with autism compared to controls, which was consistent with what they had seen in mice. A genetic analysis revealed that the human gene homologous to the mouse gene, TCF4, also contained various mutations in the regulatory regions. Importantly, there was a significant lack of mature oligodendrocytes in the brains of autistic people compared to controls and an overabundance of immature cells, and myelination was not sufficiently occurring; that is, the genetic alterations coincided in alterations in myelination and poor differentiation of oligodendrocytes. Joseph Bohlen, one of the authors of the paper, said at the Neuroscience Society conference last October, “We think that the cells that are myelinating are doing it correctly, there are just a few of them.

The summary is that the results obtained in seven murine independent ASD models were validated in human brain and implied that myelinization alterations were a common pathological feature in ASDs.

Future research will focus on the creation of brain organoids – cell balls formed by groups of neurons and glial cells that act as simplified brains – with irregular myelination and on testing compounds that could act on oligodendrocytes and increase their number, facilitate their maturation or magnify myelin production. The authors’ hope is that if children with autism are identified early, treatment of the oligodendrocytes or myelin could mitigate some of their symptoms.