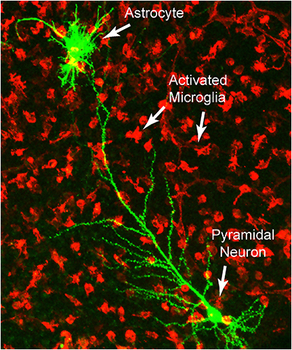 Microglial cells are the immune cells that reside in the central nervous system. They have phagocytic capacity, constitute 10% of the cells of the brain and form a fairly regular three-dimensional network in which each microglia has a unique territory. Its cell body presents many expansions with numerous fine processes, amazingly mobile, with which they continuously patrol the tissue environment. Through this surveillance they detect different extracellular signals and then translate them, integrate them and respond to them in order to maintain cerebral homeostasis.

It is increasingly clear that microglia responses can be very varied and will often determine the development, worsening or cure of a brain disorder. In fact, microglia is a key element in the normal functioning of the brain and, also, in many of the disorders and diseases that afflict it. Among the functions in which the microglia participates are synaptic pruning (sculpting neuronal circuits eliminating elements such as axon terminals or dendritic spines) and neuronal plasticity. In the visual system of the mouse, the first process depends on neuronal activity and sensory experience and the microglial cells ingest preferably the less active presynaptic sites. It is unclear how microglial cells recognize these synapses with little activity, but apparently they use some of the molecules involved in the complement cascade. It makes sense because in the innate immune system these proteins are signals that say “eat me” and are used to label microbes, cells in apoptosis and other pathogens that must be destroyed by circulating macrophages. An aberrant pruning of synapses during critical periods of development may be one of the causes of neurodevelopmental disorders such as autism.

Microglia is also responsible for phagocytosis of neurons that have died of apoptosis, a normal process that eliminates the excess of neurons generated as part of brain development and also of neurogenesis in adults. But the microglia are not only scavengers, they are also neuronal exterminators and lead many neurons to their programmed death inducing apoptosis without causing inflammation through the release of superoxide ions, nerve growth factor and tumor necrosis factor. Under physiological conditions, phagocytosis by microglia is coupled with apoptosis through “find me” signals. One of the most potent messengers is ATP that is released by neurons in apoptosis. In a healthy brain the proportion of microglia cells engulfing cells at a given time is very low, indicating that there is a wide potential to recruit more cells if necessary. Microglia is also crucial for the regulation of activity-dependent synaptic plasticity, adult neurogenesis and learning and memory.

It has been suggested for some time that microglia could be involved in autism and other neurodevelopmental disorders 1, but now we have solid evidence for the first time. A large-scale autopsy study performed by Johns Hopkins’ researchers has revealed that the brains of people with autism show chronic inflammation produced by microglial activation. When microglia colonize the brain during early embryonic development, alterations in the genome or some environmental influences may alter the maturation of these cells or their control of neuronal and synapse populations. The postmortem analysis of brains of people with autism has found alterations in the number, morphology and interaction with neurons of microglia cells, particularly in regions such as the dorsolateral prefrontal cortex that is responsible for executive functions. Whole-genome analyzes have found alterations in the genes expressed by microglia in some people with autism, including markers of inflammatory status. A neuroimaging study that looked for the location of the translocator protein TSPO, which is expressed in microglia and astrocytes, has found a greater amount in the brains of young people with autism, something that has also been subsequently verified in tissue from autopsies. It is not clear, however, if it is a specific change of the microglia or is a general indicator of gliosis and inflammation. And we do not know, either, whether the microglia is simply reacting to the alterations in the microenvironment of the nervous tissue or is a causative element of those changes.

If a maternal immune activity is induced in pregnant females, a pro-inflammatory cytokine profile in the fetal brain is generated by a bacterial component such as lipopolysaccharide and this profile is maintained until adult life in the amygdala 2. Inflammation activates cells in the fetal brain and produces alterations in two glial populations: microglia and astrocytes. Furthermore, cytokines and their effects on glia can have negative consequences for the viability of neurons. These changes induced by the immune response and mediated by astrocytes and microglia may explain a predisposition to some disorders where the amygdala is involved, such as anxiety and depression, and also to neurodevelopmental disorders, such as autism.

An example of this relationship is the case of Rett’s disease, where affected people have mutations in the MECP2 protein and show symptoms of autism. In these individuals the microglia engulfs and digests too many synapses in the terminal stages of the disease but this effect is independent of the loss of MECP2 in the microglial cells themselves. This result suggests that pruning of synapses can be deregulated or have excessive activity, which would lead to a loss of synapses, altering the normal circuitry of the brain. With regard to environmental signals, microglia responds to proinflammatory molecules and to any situation that generates a general or localized inflammation during critical periods of development can produce effects that are lifelong. This would also explain why some prenatal and mother infections such as rubella increase the risk of autism in their progeny. Pregnant mice in which an activation of the immune system with viral or bacterial components is generated, show in their offspring a drop in social behavior, an increase in repetitive behaviors, an increase in anxiety and an alteration of ultrasound vocalizations, characteristics that recall strikingly those of people affected by autism. If then those same animals are affected by a second condition, stress for example, the changes are more serious.

Genetic studies have seen that there are several phases in the temporal development of microglia in which they are sensitive to genetic and environmental factors, such as alterations in the microbiota or a maternal immune activation. In turn, microglia can modulate the maturation and functioning of neurons through the release of inflammatory cytokines and other molecules such as interleukins or TNF, which also regulate the maturation and plasticity of synapses 3. Therefore, the disruption of the genetic or environment of microglia, both during development and in its subsequent functioning, may be relevant for ASD. In rodents, alterations in microglia including the genetic deletion of specific receptors of the microglia result in failures in the growth of the dopaminergic axons in the telencephalon and in the correct positioning in cortical layers of specific groups of interneurons. Furthermore, failures in the function and connectivity of synapses, including problems in synaptic pruning, are thought to be a substrate for autism and schizophrenia. An example of this is the knockout mouse for Cx3cr1, which has altered synaptic pruning and presents social deficits and defects in neuronal connectivity. There is hope that by modulating the activity of the microglia we can correct some of those symptoms.

The art of forgetting: microglia eats memories away in mice